In the play, “A Midsummer Night’s Dream, by William Shakespeare, several examples of love’s association with a higher power are presented like Theseus arranging a marriage between himself and Hippolyta, Egeus choosing who Hermia should marry and the fairies who have the ability to control love in the Enchanted Forest. There are many instances in “A Midsummer Night’s Dream” where love is coerced from or foisted upon unwilling persons. This romantic bondage comes from both man-made edicts and the other-worldly enchantment of love potions.

Don't use plagiarized sources. Get your custom essay on
“ Types of love in “A Midsummer Night’s Dream” ”
Get custom paper
NEW! smart matching with writer

Tinkering with the natural progression of love has consequences.

These human and fairy-led machinations, which are brought to light under the pale, watery moon, are an affront to nature. Shakespeare knows that all must be restored to its place under fate’s thumb when the party of dreamers awakens. Is love controlled by human beings who love one another, or is love controlled by a higher power? There are many people who believe that a higher power has control over love.

An example of a higher power would be a cupid, a flying angel-type creature who is supposed to shoot arrows at people to make them fall in love. There are other people who reject the idea that a higher power controls love and that the people who experience love can control it. There are several examples of love in Shakespeare’s play: Forced love, parental love, romantic love (true love), unrequited love, and jealous love.

In the instance of Theseus and Hippolyta, Theseus won his soon to be wife through a war.

He was the war hero and she was his spoil. Theseus and Hippolyta’s marriage is used by Shakespeare to portray forced love. “I wooed thee with my sword” said Theseus. Hippolyta, having been the Queen of the Amazons, has been conquered by Theseus and is therefore under obligation to marry him, hence showing forced love. She is dutiful to Theseus, who in return treats her well. When Theseus said “wooed” this could perhaps imply Theseus is truly in love with Hippolyta and does wish to treat her properly. In Act 5 scene 1, Hippolyta says “My Theseus”, (Shakespeare pg.1690) this shows she is willing to marry him, and this shows the nature of their love is also very mature, which contrasts from the young love of the four lovers.

Theseus and Hippolyta’s maturity is also reflected in their speech. Their words are much more controlled and not as rash or irrational as those of the four lovers. In the beginning of the play, it is clear that Theseus is more sympathetic to Hermia’s situation than Egeus, yet he also up-holds the law as the ruler of Athens. This shows he is dutiful and reinforces the idea of maturity. However, at the end of the play, just before the wedding, he permits Hermia and Lysander to marry; this decision was probably heavily affected by his own experience, especially since it was his wedding day and this joyous occasion which lingered on his mind. His love for Hippolyta had probably grown leading to the marriage, and he too understood the four lovers’ love, and too left him vulnerable to the effects of love. (BookRags)

Another type of love Shakespeare shows is parental love. Egeus and Hermia’s father-daughter relationship illustrates parental love: Egeus said, “She will marry Demetrius or be put to death” (movie) and “As she is mine, and all my right of her.” (Shakespeare pg.1650) In the past, when this play is set, the law allowed fathers much more power and control over their daughters, and Hermia, in this way, is seen as her father’s property, so he may command her as he will. This shows his authority and commanding love as part of paternal.

This could also be a façade for Egeus’ love for his daughter, as perhaps he has to appear commanding and strict, since society deemed it so. Also, Egeus might be afraid of the uncertainty of his daughter’s future, and therefore having control over her helps settle his mind. I think, in the end, Egeus wants what he thinks is best for his daughter, though of course Hermia’s views of what is best for herself is different. Egeus wishes for Hermia to marry a nobleman to ensure her of a comfortable life. In governing her, he has control over his daughter, allowing only what he wants for her, this shows over-protective love, another form of parental love. (Mission Ventures)

True love is a type of love Shakespeare displays in “A Midsummer Night’s Dream.” Hermia and Lysander’s relationship represents true love. “The course of true love never did run smooth.”(Shakespeare pg.1651) This line delivered by Lysander captures clearly the nature of true love. True love is seen as strong, and can endure despite hardships. It is difficult to keep once found but well worth the troubles. The course of their true love does not run smooth for many reasons. One of the reasons is Egeus, Hermia’s father. By law he has power over her and what he wants for is daughter is what must happen. And by that, Hermia is expected to be dutiful to her father, by respecting and obeying him. His over-protective parental love demands Hermia a different man, but Hermia and Lysander’s determination brings the two through, again supporting true love as strong.

Egeus and the Athenian Law are both obstacles that result in their relationship not running smoothly. True love is mutual, and their decision to elope is also a mutual decision, this seems rash and could imply their love to be passionate. However, their decision to reveal their plan to Helena was foolish and illogical; this shows Hermia and Lysander’s love to be young, fun and secretive, though they are excited and both cannot wait to share their secret with their closest friend. Yet this action just proves to result in yet another obstacle, also their youth, perhaps their immaturity and their lack of thinking things through. Despite the obstructions, their love succeeds in the end to show true love is strong and cannot be ignored and with determination it prevails. (Hillegass)

Unrequited love or love that is only one sided, which is shown by Helena and Demetrius’ relationship: “The more I love, the more he hateth me.” said Helena. (Shakespeare pg.1653) This evidently shows Helena’s love for Demetrius, and yet her love for him is not returned for he is blinded by his love for Hermia. This unrequited love shows the cruel nature of love. Demetrius ignores Helena in an attempt to get her to leave him alone, when she is madly in love with him.

However his plan backfires and only causes her love and desperate desire for him to grow, which results in him hating her even more, subsequently a destructive cycle develops that worsens, without the two noticing. It is a vicious relationship and if allowed to endure, it would be devastating. The relationship between Demetrius and Helena can also be described as abusive, shown here by Demetrius’ line: “I love thee not, therefore pursue me not.” (Shakespeare pg.1661) Demetrius learned the information from Helena concerning Hermia and Lysander’s plans to elope. Demetrius has taken what he wants from her and tells her to leave him alone. This shows that love can pose a cruel and abusive nature. (Evans/ProQuest)

The last type of love is jealous love. Jealous love is shown through Oberon and Titania’s relationship. “I’ll met by moonlight.” said Oberon.(Shakespeare pg.1658) This shows that there are troubles present in their relationship, since the two do not appear to be on good terms. Oberon and Titania are arguing over the changeling boy, the son of one of Titania’s late friends. Oberon would like to possess this child, but Titania refuses to let him go. This shows that the nature of love can at times be irritating and troublesome and that the love between Oberon and Titania is most definitely not running smoothly. “What, jealous Oberon” said Titania. (Shakespeare pg.1658) Oberon does not actually deny his jealousy of Titania and the changeling boy, and through his actions, you can see, although at times it is very subtle, Oberon’s jealousy.

Shakespeare presents many natures of love in, “A Midsummer Night’s Dream”. He shows mutual love between Lysander and Hermia, and their confused love in the woods and also the joyous and celebrative love at the end. He shows how love can affect a person’s actions and judgments, such as Egeus denying Hermia and Lysander to be together therefore lead to them to run away and elope. Shakespeare also shows that whether one is young or old, there is love. But above all, he has shown the various natures of love, and how there appears to be an infinite number of different kinds of love. Love appears in many ways: Forced love, parental love, true love, unrequited love, and jealous love. So whether brought on by a higher power or human beings, love is everywhere, exciting, and powerful, and full of ups and downs.

Types of love in “A Midsummer Night’s Dream”. (2017, Jan 23). Retrieved from https://studymoose.com/types-of-love-in-a-midsummer-nights-dream-essay 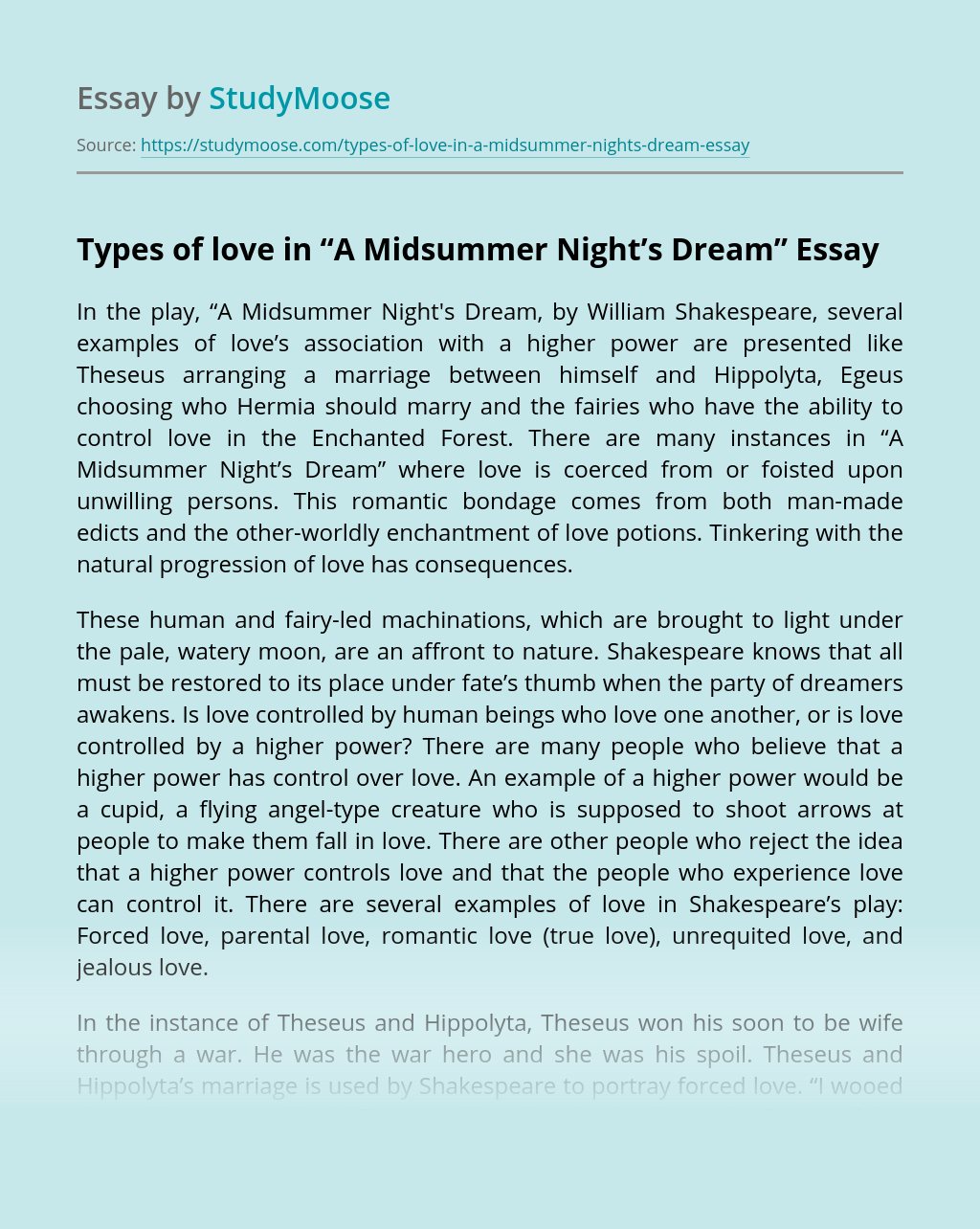