Symbolism and Metaphors of A Midsummer Night's Dream

In Shakespeare’s play A Midsummer Night’s Dream, metaphors concerning the moon, flowers, and Cupid are prevalent and have a significant impact on the play. The play focuses on a romantic situation between four Athenians: Hermia, Lysander, Helena, and Demetrius. As the story unravels, many comparisons are made to enhance the language and the messages that the characters try to convey. The moon is personified as a chaste woman who can be both gentle and fiery. Flowers are used as romantic symbols with the power to influence love.

Don't use plagiarized sources. Get your custom essay on
“ Symbolism and Metaphors of A Midsummer Night’s Dream ”
Get custom paper
NEW! smart matching with writer

Cupid is personified as an armed child who strikes people’s hearts even if that love was not meant to be.

Various events in the play are compared to the moon, which is constantly being personified as a woman. In the beginning of the play, Hippolyta and Theseus are discussing how they are to get married in four days. Theseus complains about how slowly the moon wanes. He compares the moon to a stepmother and a widow who keeps her stepson waiting for his inheritance because it takes so long for her to die (1:1, 1-6).

Theseus is saying that the days are passing by too slowly and he wants to get married already.

As the play progresses, Theseus tells Hermia that her life will consist solely of “chanting faint hymns to the cold fruitless moon” (1:1, 73). Once again, the moon is personified as a cold and barren woman. Theseus warns Hermia that if she chooses not to comply with her father’s wishes, she will stay a virgin priestess forever, living her entire life without a husband or children, just like the moon.

The moon is compared to things much more destructive and emotional later on in the play. Oberon and Titania, the king and queen of fairies, have been in a disagreement for a long period of time. Their constant fighting has affected nature adversely, causing spring, summer, fertile autumn, and angry winter to change places. Titania vividly describes their arguments as having caused the moon, the “governess of floods,” to be pale in anger, filling the air with rheumatic diseases (2:1, 103-104). The moon is personified as a female ruler who controls the tides of the ocean. It is also given the human emotion of anger when it turns pale.

When Bottom and Titania are together, Bottom speaks about crying for mustardseeds being eaten by oxen. Titania states “the moon methinks looks with a watery eye; and when she weeps, weeps every little flower, lamenting some enforcèd chastity” (3:1, 193-195). Titania says that the moon is “misty-eyed, and when she weeps, so does every little flower in grief for violated chastity.” The moon is again personified as a woman and she is crying because the mustardseeds have been wronged.

When it is time for Bottom to sleep, Titania orders her fairies “to fan the moonbeams from his sleeping eyes” (3:1, 168). The first metaphor “to fan the moonbeams” is comparing moonlight to a solid substance that can be fanned away. The second metaphor is the sleeping eyes of Bottom. Bottom’s eyes are not literally sleeping. It is Bottom who is doing the sleeping, not his eyes.

Flowers are associated with love and emotions throughout the play. Theseus attempts to convince Hermia to marry Demetrius so that she would not have to spend the rest of her life living as a virgin priestess of the moon goddess. He tells her that it is better to live a life with love in it even if it is not the love she originally desired rather than to live without love at all.

Theseus says “thrice-blessèd they that master so their blood to undergo such maiden pilgrimage; but earthlier happy is the rose distilled than that which, withering on the virgin thorn, grows, lives, and dies in single blessedness” (1:1, 74-78). He compares women who are chaste to unplucked roses who wither up and die. Married women are compared to roses that have been plucked and made into a sweet perfume (1:1, 76-78).

Oberon desires an Indian prince that was given to Titania by the prince’s mother. In order to obtain the Indian prince, Oberon plans to make Titania fall in love with a beast by spreading the juice of a flower on her eyelids while she is sleeping. He tells the story of how this special flower came into existence. Cupid took aim at a beautiful young virgin queen, but his fiery arrow was put out by the watery, virginal moonbeams and struck a little western flower. The flower which used to be white as milk, turned purple from being wounded by the arrow of love (2:1, 155-168). The flower is personified and given the ability to be afflicted with love in this play.

When Titania wakes, she is compelled to fall madly in love with Bottom, clumsy and grotesque with an ass’ head. When he goes to sleep, Titania tells Bottom to stay with her, saying “I’ll give thee fairies to attend on thee, and they shall fetch thee jewels from the deep, and sing while thou on pressèd flowers dost sleep” (3:1, 150-153). The flowers are compared to soothing objects that can calm people and bring sleep.

Seeing Titania and Bottom together, Oberon cannot believe how someone as beautiful as Titania can dote on Bottom, whose looks are repulsive. Before she fell asleep, Titania wove a wreath of fresh, fragrant flowers for Bottom and placed it on his hairy forehead. Oberon cannot stand to see such beautiful flowers rest on Bottom’s hairy temples. Oberon states that the flowers on Bottom’s head had “tears that did their own disgrace bewail” (4:1, 54-55). He says that the drops of dew that lay in the center of the flowers made the flowers look like they were crying in shame to be decorating the head of an ugly jackass. The flowers are personified as people who can cry and feel degradation.

In love with Hermia, Demetrius pushes Helena away. Helena, heartbroken, complains about love and Cupid. She says “and therefore is winged Cupid painted blind. Nor hath Love’s mind of any judgment taste” (1:2, 235-236). In modern times, we say “love is blind,” however, in this case cupid is blind. Helena personifies love as a child who does not have any judgment. Cupid is so often misled in making a choice because of his rash judgment.

When telling the story of the flower, Oberon says “Young Cupid’s fiery shaft quenched in the chaste beams of the watery moon” (2:1, 161-162). The “fiery shaft” is a metaphor used for Cupid’s arrow which can cause fiery passionate love.

Love is much talked about throughout the play. Hermia’s father is full of anger and he does not support Lysander and Hermia’s relationship. Lysander tells Hermia that “the course of true love never did run smooth” (1:1, 134). Lysander is saying that love is hard and it can feel like a long and rough road for two lovers.

In Lysander and Hermia’s grief and despair, Lysander makes a speech about the transience of love. Love is “swift as a shadow, short as any dream, brief as the lightning in the collied night” (1:1, 144-145). Lysander compares the briefness of love to the quickness of a shadow, a dream, and a lightning. He means that with love comes many difficulties, such as pressure from parents, sickness, or death. Lysander goes on to say “The jaws of darkness do devour it up; so quick bright things come to confusion” (1:1, 148-149). He compares his love with Hermia to something bright but fades away quickly because of the confusion brought to it by time and nature.

When asked to give up her child to Oberon, Titania refuses, telling him that this Indian prince was given to her by his mother, a female worshipper. She says “when we have laughed to see the sails conceive and grow big-bellied with the wanton wind” (2:1, 128-129). Titania is saying that when the sails filled up with wind, they looked like they had big, pregnant bellies. She is comparing the sails of ships to big, pregnant bellies of women.

Due to Oberon’s unspecific details on whose eyes Puck was suppose to spread the love juice on, causes Lysander to fall in love with Helena. When Hermia questions Lysander, he treats her cruelly saying “Get you gone, you dwarf, you minimus of hindering knotgrass made, you bead, you acorn” (3:2, 328-330). Lysander is insulting Hermia, calling her a dwarf, a tiny little weed, scrap, and an acorn. In this metaphor, he compares Hermia to a tiny, unwanted plant, useless scrap, and an acorn.

A Midsummer Night’s Dream is encased with many metaphors pertaining to the moon, flowers, and Cupid of the play. As the reader follows the Athenian lovers and the fairies on their journeys, various messages are conveyed through symbols and metaphors. The language and messages evokes vivid images in the reader’s head. The moon is compared to a woman who is capable of controlling time, controlling the seas, crying, and being fruitless. Flowers are symbols of romance, raw human emotions, and fairy magic.

The flowers can metaphorically make people feel compelled to fall in love and are also capable of crying and feeling shame in this play. Cupid is portrayed as a controller of love. Just like love, Cupid is a young boy who is irrational. He is a child with a blindfold and wings, ready to take aim randomly, causing people to be afflicted with love. The moon, flowers, and Cupid are the main themes of metaphors presented in A Midsummer Night’s Dream by William Shakespeare.

Symbolism and Metaphors of A Midsummer Night's Dream. (2016, Nov 20). Retrieved from https://studymoose.com/symbolism-and-metaphors-of-a-midsummer-nights-dream-essay 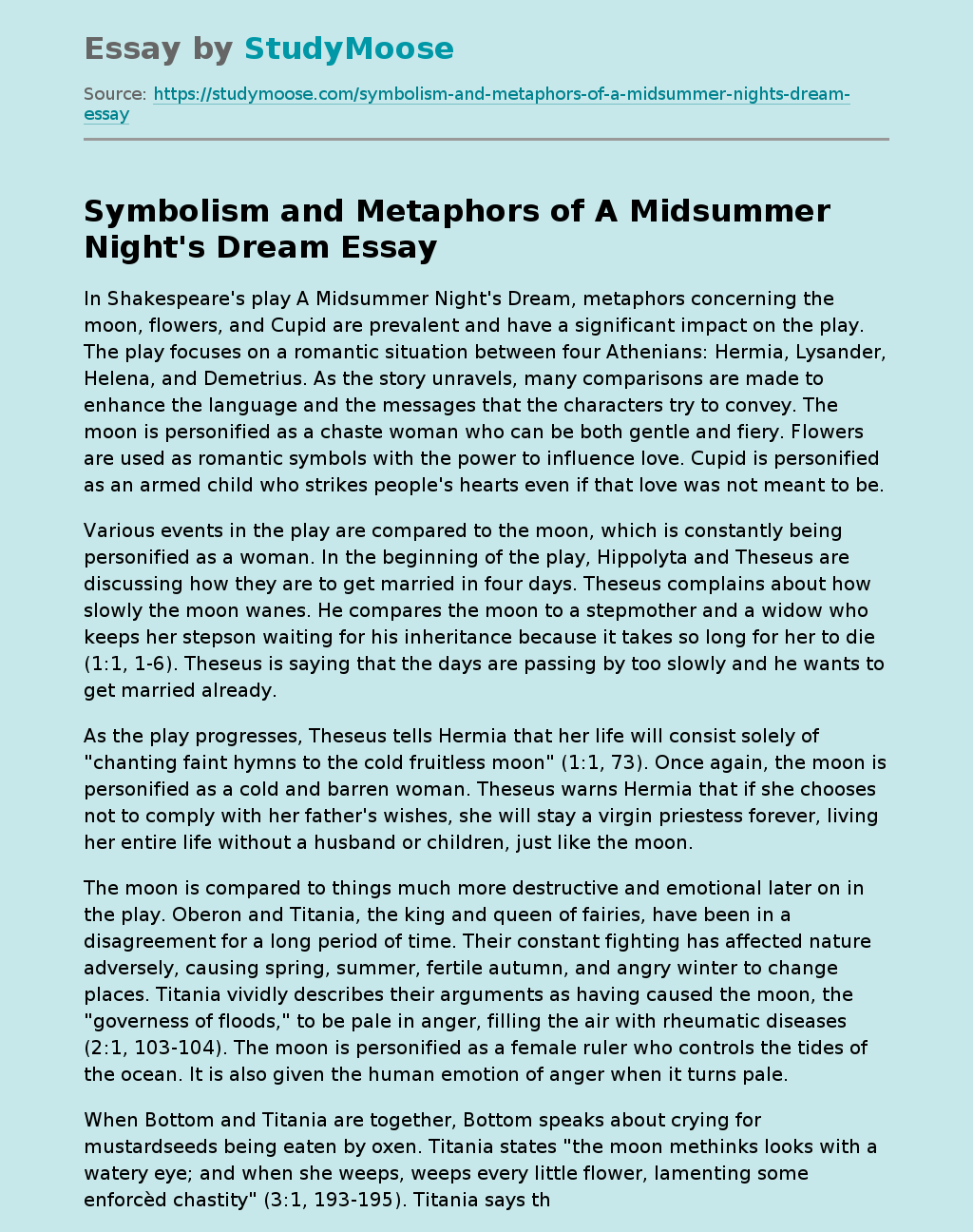