Midsummer Night's Dream as a Comedy

Q. In what ways is A Midsummer Night’s Dream a Shakespearean comedy? A Midsummer Night’s Dream is a classic Shakespearean romantic comedy. A genre, that attempts to catch the viewer’s heart with the combination of love and humor. It is light-hearted and usually places the protagonists in a humorous situation. It is one of the many kinds of comedy which dates back to the 16th century stage in England and it has an identifiable formula. It has a main plot and a subplot.

In the main plot an eligible man and woman fall in love with each other but cannot marry for some reason. Then some external agency like the disclosure of a secret or a trick by others brings the lovers together. While many romantic comedies are chided for their predictable plotlines, it was William Shakespeare who first created these well-known story arcs. His comedies are known to strike a balance between expectation (the formula) and yearning (the fantasy).

The following characteristics will summarise the reasons of this play being treated as a romantic comedy: Light, humorous tone: The play features fairy magic (like Oberon’s love potion), silly pranks (like the transformation of a guy’s head into that of a jackass), and the botched performance of a play-within-the-play by a bunch of wannabe actors.

Clever dialogue and witty banter: Shakespeare is a huge fan of puns and snappy word play, so naturally, his characters know how to get their witty repartee on. Shakespeare reserves some of the best dialogues for his warring lovers, especially Oberon and Titania, and even the “rude mechanicals” manage to wow us with their clever banter.

Deception and disguise: Hermia and Lysander try to sneak away from Athens to elope (behind Egeus’s back). Also, Titania and the young lovers have no idea they’ve been drugged by Oberon and his magic love juice. Mistaken identity: Titania mistakes Bottom for a creature who is worthy of her love and affection. The same can be said of the other lovers who are dosed with Oberon’s magic love potion. Multiple plots with twists and turns: There are several lines of action in A Midsummer Night’s Dream and Shakespeare invites us to sit back, relax, and enjoy the ride. The first plot involves Theseus and Hippolyta’s upcoming wedding. The second plot line involves the young Athenian lovers who run around the wood in confusion. The third plot follows Oberon’s tiff with his wife, Titania.

As a fourth plot line, Shakespeare works in a bunch of craftsmens (the Mechanicals), who plan to perform a play at Theseus’s big fancy wedding. Love overcomes obstacles: From the play’s very beginning, Shakespeare beats us over the head with this idea. The only reason Theseus is even engaged to Hippolyta is because he conquered her people (the Amazons) and basically won her in battle. Just a few moments after we hear about Theseus and Hippolyta, we learn that Hermia and Lysander must also overcome a major obstacle if they want to be together because Hermia’s dad wants her to marry someone else. Never mind the fact that we’ve got a bunch of mischievous fairies running around the wood sloshing magic love juice into the eyes of hapless humans, causing them to fall in and out of love with the first creature that comes into view. In the end, though, love wins out and Theseus and each of the four young lovers hooks up with a steady partner.

Marriage: No matter what else happens, Shakespeare’s comedies ALWAYS end with one or more marriages (or the promise of marriage). This is Shakespeare’s way of restoring social order to the world of his plays (after turning order on its head for a few hours). At the end of A Midsummer Night’s Dream, Theseus finally gets to marry Hippolyta and spend the night with her (which he’s been talking about since the play’s opening lines). As for the four humans who have been chasing each other around the forest and falling in and out of love, they finally settle down and hook up with a steady partner: Hermia weds Lysander and Demetrius gets hitched to Helena.

Family drama: Hermia and her dad Egeus go toe-to-toe about who she should and shouldn’t marry. Egeus is so worked up about his daughter’s disobedience that he wants Duke Theseus to uphold the Athenian law that says daughters have to do what their fathers’ say or else they get sentenced to death. It’s a good thing A Midsummer Night’s Dream isn’t a tragedy, otherwise, this ugly little domestic dispute would end badly. (Re)unification of families: Egeus would rather see his daughter dead than witness Hermia marry Lysander. A Midsummer Night’s Dream is a comedy so Egeus eventually backs down and gives in to the idea that Hermia is going to marry for love. We should point out that Egeus only changes his mind after Duke Theseus orders him to back off but still, Egeus sticks around for his daughter’s wedding so we’re counting that as a family reunion.

Midsummer Night’s Dream as a Comedy. (2017, Feb 01). Retrieved from https://studymoose.com/midsummer-nights-dream-as-a-comedy-essay 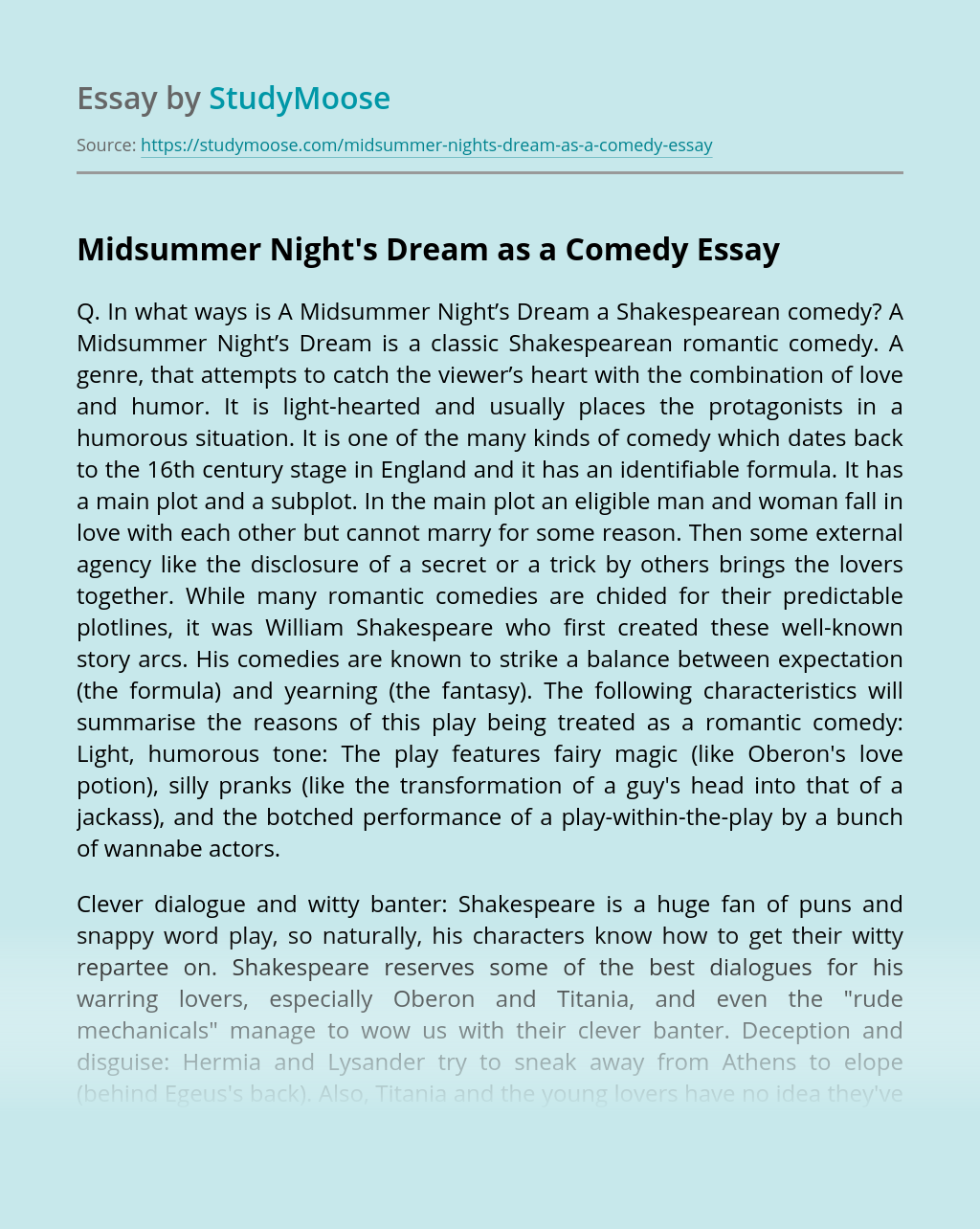 Desperate lovers, mischievous fairies, bad actors, and a flower which causes love upon first sight-these are just some of the components that add to the comedic flavour of Shakespeare’s work _A Midsummer Night’s Dream_. The main elements of a classic Shakespearean comedy are clearly portrayed in this play. An identity mix-up of Lysander and Demetrius,...

The Comparison of a Midsummer Night's Dream

In between the years of 1588 and 1613, Shakespeare composed 38 plays. His dramatic work is typically studied in four classifications: comedies, histories, catastrophes, and love. Although we typically single out William Shakespeare’s work as remarkable and deserving of unique attention, at the time of the plays efficiencies, they were usually released as popular home...

Historical records from the late 16th century are marked by the serious results of the pester, which spread out throughout the majority of Europe. The increased death rate and famine reduced cultural advancement and thus very couple of artworks or literature were produced. Throughout these devastating years, the young poet William Shakespeare refused to travel...

Lysander and Hermia, Demetrius and Helena, Titania and Oberon, Pyramus and Thisbe 1) Exposition: Lysander and Demetrius both want Hermia’s hand in marriage – Lysander because of love, Demetrius because of the position and power it would afford. Demetrius wants to marry Hermia to gain her father’s favor, along with his power and position. Helena...

In the play, “A Midsummer Night’s Dream, by William Shakespeare, several examples of love’s association with a higher power are presented like Theseus arranging a marriage between himself and Hippolyta, Egeus choosing who Hermia should marry and the fairies who have the ability to control love in the Enchanted Forest. There are many instances in...

In the early stages of Romeo and Juliet, the Montague parents send Benvolio to discern the cause of Romeo’s melancholy. They intervene in his relationship, but in this case it has no long-lasting effects. During Romeo’s relationship with Juliet, adults again intervene; sadly, though, in this case the effects are deeply felt and much more...

Shakespeares Romeo and Juliet and Malorie Blackmans Noughts and Crosses

How is forbidden love conveyed in both Shakespeare’s Romeo and Juliet and Malorie Blackman’s Noughts and Crosses? In Shakespeare’s Romeo and Juliet (c.1595) and Malorie Blackman’s 2001 Noughts and Crosses, the theme of forbidden love is greatly conveyed throughout both texts. The themes are similar in each text, regardless of the severe differences in era...