The Buddha has a saying that goes “When you like a flower, you simply pluck it. But when you love a flower, you water it daily.”. Love is a complicated manner that transforms into something so easy and lovely when the right couple is reciprocating it. It is something that brings joy to people’s day, something that relieves their stress, and is sometimes the reason why people wake up in the morning. Love is so beautiful that it even has its own special day on the 14th of February.

Don't use plagiarized sources. Get your custom essay on
“ A Midsummer Night’s Dream: Representation of Love ”
Get custom paper
NEW! smart matching with writer

In William Shakespeare’s play, A Midsummer Night’s Dream, love is displayed in a very different manner. Characters such as Titania and Oberon, Helena and Demetrius, and even Lysander and Hermia represent love in a toxic way. Each relationship that is mentioned represents a toxic relationship through manipulation, desperation, and unrequitedness. Even though William Shakespeare uses these components in his play to add a sense of humor, the overall message about love is not correct.

Love is a component that everyone needs and is something that should not be made fun of.

​To start things off, manipulation throughout the play is a strong trigger of a toxic relationship. It is a strong trigger because love is never supposed to be controlled, instead, it should be a reciprocated manner that both people enjoy and appreciate. “Oh Helen, goddess, nymph perfect, divine! To what, my love, shall I compare thine eyne? Crystal is muddy! O, how ripe in show Thy lips, those kissing cherries, tempting grow! That pure congealed white, high Taurus’ snow, Fanned with the eastern wind, turns to a crow When thou hold’ st up thy hand.

O let me kiss This princess of pure white, this seal of bliss”. (3.2.137-145). This example proves the manipulation that runs throughout the play because Demetrius, who is known to hate Helena, is suddenly admiring her and telling Helena things such as wanting to kiss her when he did not want to do anything at all with her a few acts ago.

Likewise, when Titania falls in love with Bottom, in his donkey form. “I pray thee, gentle mortal, sing again; Mine ear is much enamored of thy note. So is mine eye enthralled to thy shape, And thy virtue’s force perforce doth move me on the first view to say, to swear, I love thee” (3.1.114-118). Yes, it is given that Titania and Oberon had a huge fight earlier in the play because of Titania’s accusation on Oberon for cheating on her, however. Even after a disagreement as crazy as theirs, surely Titania would not replace a king with a horrifying mortal. The only reason why Titania and Demetrius are acting this way is that they are under the spell of the love potion. With these two relationships, it is obvious that one person is truly in love with another, not because of true love, but because they are under a spell. Both display toxic relationships because the only reason why their relationships are thriving is due to the other individual false representation of love.

​Moreover, love is also displayed as if it were something can be achieved through desperation. “And even for that do I love you the more. I am your spaniel; and, Demetrius, The more you beat me I will fawn on you. Use me but as your spaniel; spurn me, strike me, Neglect me, lose me; only give me leave, Unworthy as I am to follow you. What worser place can I beg in you love (And yet a place of high respect with me) Than to be used as you use your dog” (2.1.202-210). Helena who is deeply in love with Demetrius begs of him to do anything, and she means anything, to her just so he can notice her and love her. Desperation is displayed because it is obvious that Demetrius is unwilling to love her, yet Helena is still out here

trying anything just so Demetrius would love her. The same idea is being conveyed, when Lysander and Hermia were in the woods and Lysander tries to seduce Hermia, “O take the sense, sweet, of my innocence! Love takes the meaning in love’s conference; I mean that my heart unto yours is knit, So that but one heart we can make of it: Two bosoms interchained with an oath, So when two bosoms and a single troth. Then by your side no bed-room me deny, For lying so, Hermia, I do not lie” (2.2.51-58). As Lysander seduces Hermia he tries and convinces her that in taking his innocence away they will become one and will truly be in love and happy, which is wrong. A couple can be truly happy and be together without having sexual intercourse, and what Lysander is suggesting proves his desperation because the only reason he wants to do what he even is offering Hermia is so that they can have a “stronger and happier’ relationship. The overall message helps support the toxic relationship in the play because both Helena and Lysander display desperation in their relationships in order to achieve something that the other individual is not up for.

​Lastly, William Shakespeare’s play also displays toxic relationships through unrequitedness, or in other words, someone not reciprocating the love that is given to them. “So will I grow, so live, so die, my lord, Ere I will yield my virgin patent up Unto his lordship, whose unwished yoke My soul consents not to give sovereignty.” (1.1.79-82). During this scene Egeus has given Hermia her ultimatum; either to marry Demetrius or die. Hermia, being in love with Lysander, refuses her father’s ultimatum and says that she does not give her consent to this idea. “Relent, sweet Hermia; and, Lysander, yield Thy crazed title to my certain right” (1.1.91-92). In this brief dialogue of Demetrius, he tells Lysander to back off and leave what is meant to be his, however. We do know that Demetrius is only acting this way because he is in love with Hermia’s eyes and looks and not at all for her personality. This relationship proves the element of toxicity that runs throughout the play because Demetrius, who “loves” Hermia, is not reciprocated with the same feelings by Hermia. At the same time Demetrius only wants this to work because Egeus told him too. 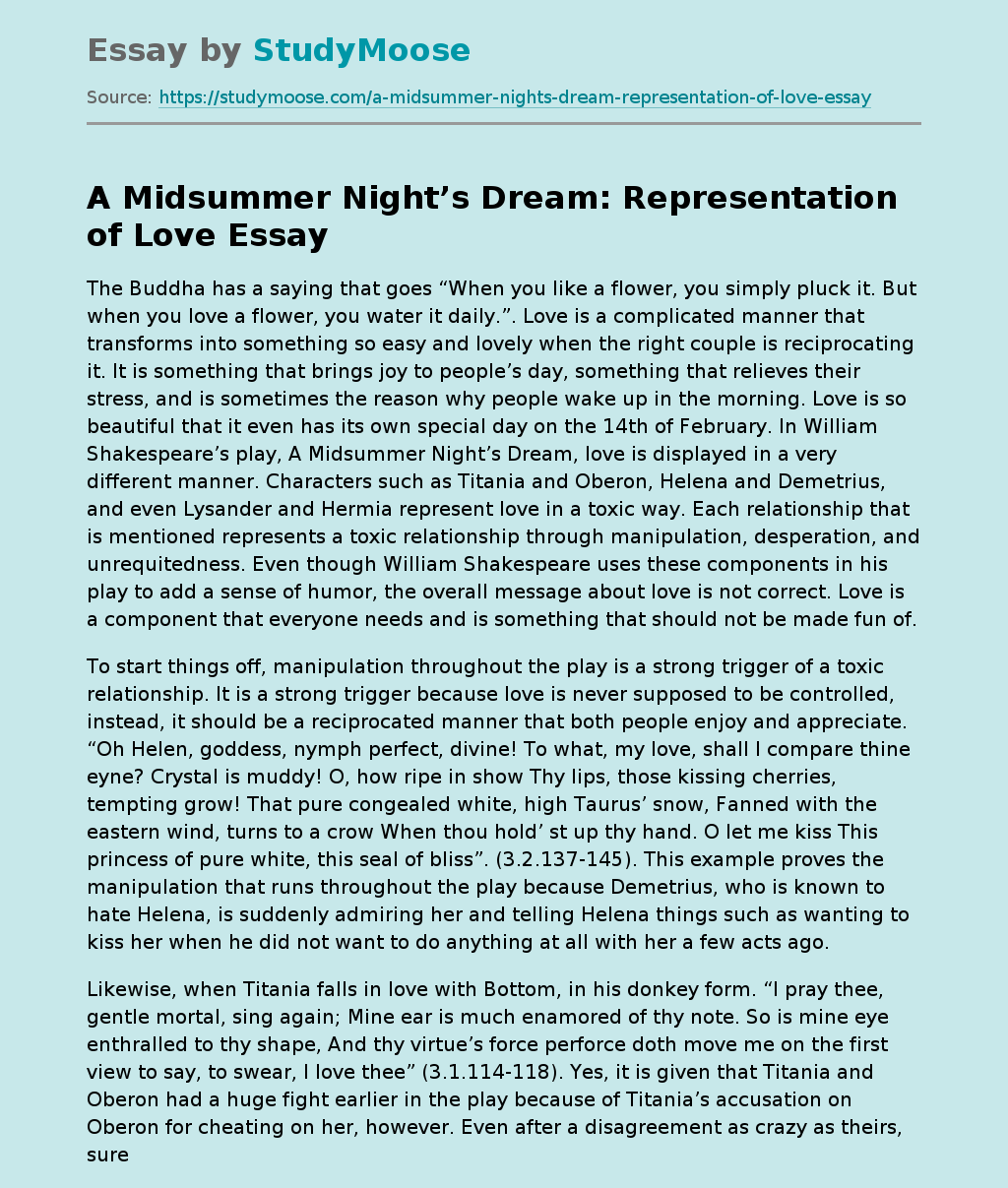