Mahatma Jyotiba Phule was a great activist, thinker, social reformer, writer and philosopher. He contributed in flelds like education, agriculture, women and widow upliftment. DhananJay Keer, his biographer, mentions him as “the father of Indian social revolution” Source of Inspiration After being insulted at wedding of a Brahmin friend, Jyotirao decided to defy the caste system. He served Shudras and women who were deprived of all their rights as human beings. Social Actlvlsm He opened girl’s school in August 1848.

As no teacher dared to work in a school in which untouchables were admitted as students, he educated his wife, Savitrlbai, and enabled her to teach the girls.

Don't use plagiarized sources. Get your custom essay on
“ Contribution of Great Philosopher Jyotirao Phule ”
Get custom paper
NEW! smart matching with writer

On 24 September 1873, Jyotlrao formed ‘Satya Shodhak Samar. Maln objective of the organization was to liberate Shudras and Ati Shudras. Contributions in Primary Education Jyotirao was not satisfied with the quality of primary education imparted. Therefore, he came up with a list of actions to Improve It. Curriculum & Role of Teacher 1 OF3 Wanted curriculum should be utilitarian and practical so as to cover the needs of the society.

Formulated the course content and included reading, writing, accounts, general history, general geography, grammar, elementary knowledge of agriculture and a few lessons on moral duties and sanitation. Teachers to be properly trained and certified. Teachers should mix with students freely and understand their wants and desires. Role of Governing Body Upgraded the supervising agency to have better monitoring over these primary schools. Compelled municipalities to maintain all the primary schools within their respective limits. Worked to get adequate grants for primary schools from provincial funds.

Recommended that Government should formulate the scheme of scholarships and rewards for the needy and deserving students. Disbelieved in vedas He was criticized in disbelieving in vedas. He considered Vedas as ‘idle fantasies’ as ‘palpably absurd legends’. He considered Vedas a form of false consciousness’. He maintained that at the root of all calamities was the blind faith that religious books were created or inspired by god. All established religious and priestly classes find this blind faith useful for their purposes and they try their best to defend it.

Criticized caste system Phule preferred British rule to the regime of the Brahmins. He was aware of the shortcomings of the former and he never hesitated to point them out openly. His mission was to bring about an egalitarian society where all men and women would enjoy liberty; Phule criticized the contemporary rulers if he felt that their policies went against lower caste, whether it was educational policy. the pernicious system of high class education. He complained against the government in neglecting the downtrodden masses.

Throughout his life, Jyotirao Phule fought for the emancipation of the downtrodden eople and the struggle, which he launched at a young age ended only when he died on 28th November, 1890. Though he was often accused of fomenting hatred between the Brahmins and the non-Brahmins, very rarely an attempt was made to consider his scathing criticism in a broad perspective. The later generations also took considerable time to understand and appreciate the profound significance of his unflinching espousal of the ‘rights of man’ which remained till the end of his life a major theme of his writings and a goal of his actions. 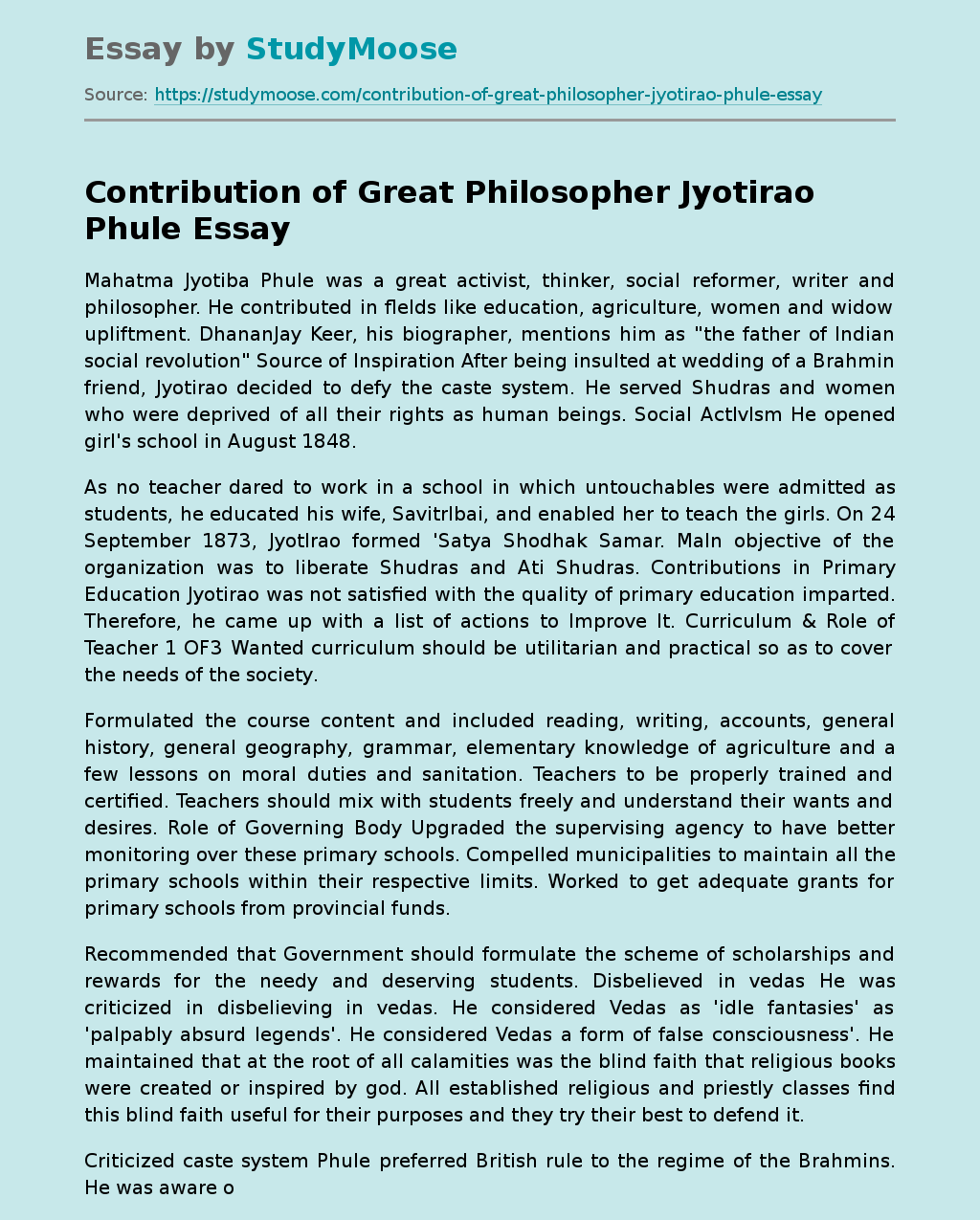