In this paper we take a look at Machiavelli who was a Realist thinker from medieval Italy. He takes a look at how he stood out as a realism thinker and consider the historical as well as the cultural context of the time and place he lived. We will also look at some practical examples of some of his views and how it could still have meaning for us today.

I have chosen to look at Machiavelli for this assignment. Niccol? Machiavelli lived from the 3rd of May 1469 to the 21st of June 1527 in Italy, during the Renaissance time period.

Don't use plagiarized sources. Get your custom essay on
“ Realist-Philosopher Machiavelli ”
Get custom paper
NEW! smart matching with writer

He was a strong influencer of the society until his exile for having too progressive views in 1513. He held positions as a politician, a respected historian, a diplomat to other cities and a thought-provoking philosopher. He also wrote plays, poems and books over the course of his life, the most known being The Prince (De Botton, 2014). The era he lived in is known as the Renaissance period, this period was defined by the movement from the middle ages to the modernity.

This period was the “re-birth” of the culture in many artistic ways, which then also shaped the future of capitalism and banking. It was in this time that Machiavelli had a profound impact as his ideas shaped the minds around the table who set principles in stone, some of which we still follow today (De Botton, 2014). I chose Machiavelli because he was a man who provoked those around him to think different about life, which lead them to establish concepts, laws, rules and guidelines we still use today! He truly was a remarkable man.

A lot of Machiavelli’s concepts and views were seen as negative, immoral and inappropriate for their time. Some of his beliefs were: (Levin-Areddy, 2018).

He became known as a bad influence for exposing that which was deemed evil in the eyes of people, but something everyone knew to be true. In all of his work, it was always shown that he was a realist, he would argue for government to be fully effective, they would have needed to put others needs above their own and to be efficient, they must let go of their deceitful ways and embrace collaboration, and although he did a pretty bad job at communicating what he was trying to say, today we can value his teachings more than the people of his time (Curtius, 2017). His main view also included that for leaders to be a great leader, they would need to stay pure and refrain from immoral motives and ideologies of their perspective of a perfect society.

An example of him trying to convey these concepts was found in his book presentation of the The Prince, in chapter 15 there is a scene which leads to the actor describing: “He who neglects what is done for what ought to be done, sooner effects his ruin than his preservation” (Machiavelli, 1513, Ch.15).

Another prime example is when he shows the uncontrollable and hidden evil of a temptation in every man: “and many have imagined for themselves republics and principalities that no one has ever seen or known to be in reality because a man who might want to make a show of goodness in all things necessarily comes to ruin among so many who are not good. Because of this it is necessary for a prince, wanting to maintain himself, to learn how to be able to be not good and to use this and not use it according to necessity” (Machiavelli, 1513, Ch.15). These passages showed the truth he believed to be residing in every man wanting power, and willing to do almost anything for it.

To fully understand some of where Machiavelli came from, we have to take into context he lived in a time where uprising, overthrowing, deceit, murder and greed was at the order of the day. For him to witness all of this and then put it into perspective he took it on fully, not leaving anything to be sugar-coated (History.com Editors, 2018). He wanted to show the extreme effects of the time by placing it in a play, magnifying the condoned evils which had rooted themselves in on the culture.

In conclusion, I do believe that Machiavelli’s teachings and viewpoints of realism has withstood the test of time and he presents scenarios where man’s deepest evils are shown brightly and loudly, and then seen in context of the consequences of these actions. I do believe culture has changed, but at the root of man, many of these desires still lie dormant, waiting for the opportunity to partner with power and rear its ugly head within the soul of some inspiring men. I believe that Machiavelli’s concepts were so true that the community of his time were shaken that someone had the guts to display it in public. In today’s world, we have seen how each and every of his concepts has come true due to the number of horrible leaders the world has seen. I think should we not be constantly checking ourselves, these desires would still come up when we are presented with power and status, from a higher position in a job to a government employee. 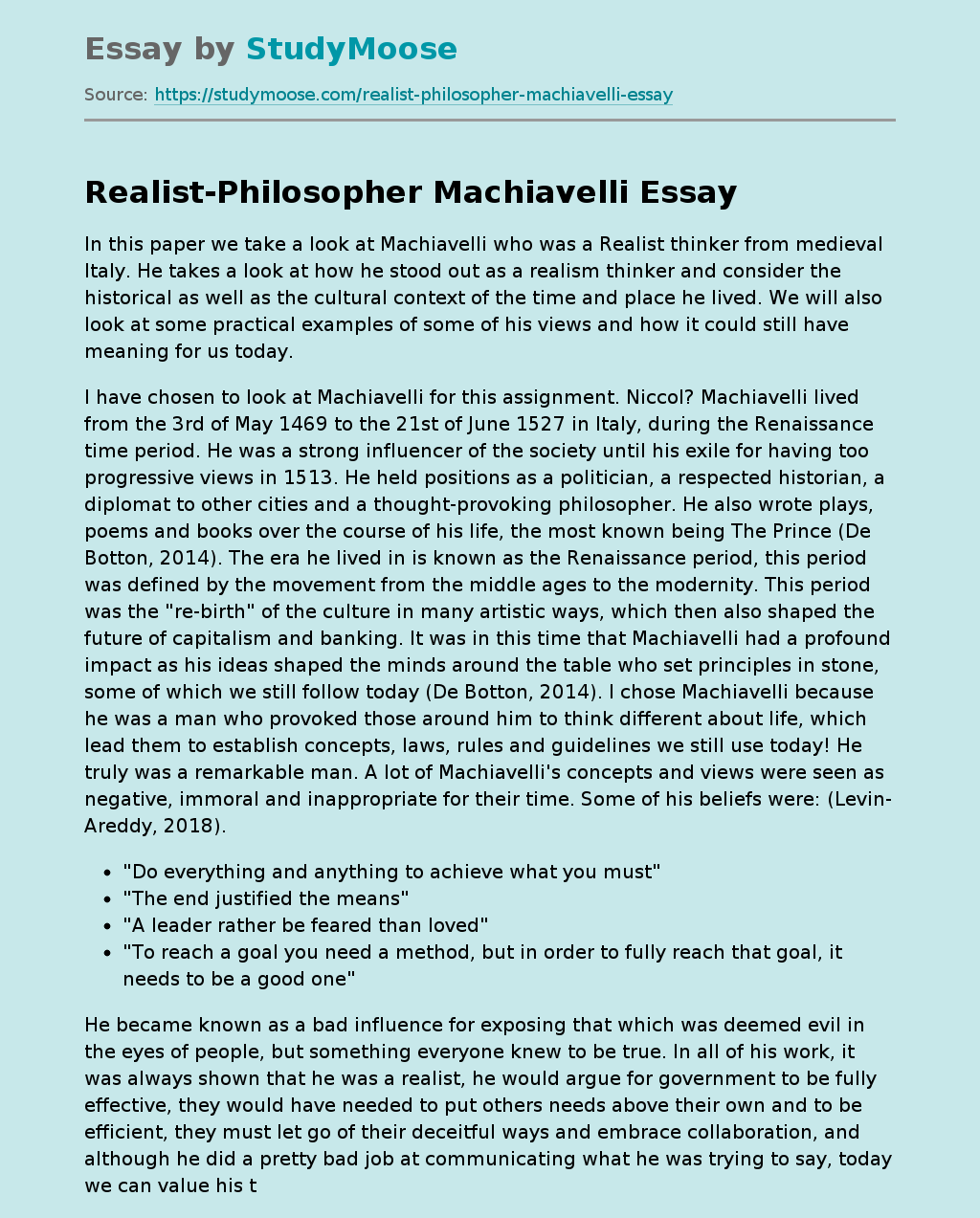