The Great Gatsby is so far-fetched that it is more like a fairy-tale than a Realist Novel. With reference to appropriately selected parts of the novel, and relevant external contextual information on the nature of fairy tale and the Realist Novel, give your response to the above view.

Many critics claim that The Great Gatsby is so far-fetched that it is more like a fairy-tale than a Realist Novel. I would agree with this judgement, because the narrative is too exaggerated with regards to both characters and settings to be called a realist novel.

Don't use plagiarized sources. Get your custom essay on
“ The Great Gatsby is so far-fetched that it is more like a fairy-tale than a Realist Novel ”
Get custom paper
NEW! smart matching with writer

A fairy tale can be defined as a traditional, simple, formulaic, orally transmitted tale which is childlike in its nature and appeal. On the other hand, a realist novel is defined as an approach that attempts to describe life without idealisation or romantic subjectivity. The two genres are diametrically opposed. In examining how The Great Gatsby is like a fairy tale, a good place to start is considering the romance between Gatsby and Daisy.

The critic Robert Emmet Long believed that Gatsby is a fairy-tale hero for the middle class, and he used the romance in The Great Gatsby to prove his point. Fairy tales usually have a romance element, and The Great Gatsby is no exception. There is nobility in a “prince’s” (Gatsby’s) efforts to win over a “princess” (Daisy). For example, Gatsby’s mansion is compared to a palace or castle, which is customary of fairy-tales: “it was a factual imitation of some Hotel de Ville in Normandy, with a tower on one side, spanking new under a thin beard of raw ivy.

” Even Gatsby’s house is far-fetched, so therefore The Great Gatsby is so far-fetched that it is more like a fairy-tale than a Realist Novel.

Fairy tale romance usually depicts two star crossed lovers who are separated by class or geographical distance, such as Cinderella who was separated from the Prince because of her poverty. Gatsby’s fairy-tale like desire for Daisy is exhibited by his fascination with the green light: “You always have a green light that burns all night at the end of your dock.” Gatsby, just like Cinderella, is too poor for Daisy but he amasses a fortune in order to gain her love. He may not have a fairy godmother, but his ability to become so wealthy so quickly could be miraculous in itself. This is the fairy-tale equivalent of a peasant becoming prince to win his princess. This is a bit far-fetched and extreme, proving that The Great Gatsby is so far-fetched that it is more like a fairy-tale than a Realist Novel.

Further support for this proposition can be found when we consider that The Great Gatsby has the fairy tale trait of presenting a battle of good vs. evil. In fairy-tales, there is a seemingly perfect character (Gatsby) that combats an evil character (Tom). This is similar to the fairy tales of the Brothers Grimm. For example, in their story Snow White the princess escapes the clutches of the evil stepmother and is saved by the prince. Tom represents evil: he cheats on Daisy and turns Gatsby in, getting him killed. There is evidence in the text that he abuses Daisy: “the knuckle was black and blue. “You did it, Tom,” she said accusingly.” In fairy tale terms he is the villain that is holding the princess (Daisy) hostage. Gatsby, on the other hand, symbolizes good: he is protagonist and a likable character; Nick describes him positively: “extraordinary gift for hope, a romantic readiness such that I have never found in any other person and which it is not likely I shall ever find again.” Both Tom and Gatsby are exaggerated in their respective evilness and goodness, therefore proving that The Great Gatsby is so far-fetched that it is more like a fairy-tale than a Realist Novel.

The final point to consider when comparing The Great Gatsby to a fairy tale is how its depressing conclusion is similar to the conclusion of many traditional fairy tales. Although our modern-day Disney fairy tales always have a happy ending when the hero marries the princess, traditional fairy tales such as those written by Hans Christian Andersen had much darker endings. For example, in the original version of The Little Mermaid, the prince marries someone else and the mermaid throws herself off the side of his ship and is subject to 300 years of slavery instead of true love. The depressing conclusion of The Great Gatsby may not be quite as fantastical as that, but nonetheless it is far-fetched in its conclusion: “It was after we started with Gatsby toward the house that the gardener saw Wilson’s body a little way off in the grass, and the holocaust was complete.” The use of the extreme word holocaust reinforces how over the top it is. In light of this, it perplexes me that anyone could claim The Great Gatsby is a realist novel, because everything about it so far-fetched and like a fairy tale.

However, those that oppose my view claim that although The Great Gatsby has many fairy tale elements, there is a definite realism to the novel. Richard Chase defined several characteristics of what makes a realist novel. He said that a realist novel uses selective presentation of a reality with an emphasis on verisimilitude, even at the expense of plot, and that characters appear real in temperament and motive. This has led many to define The Great Gatsby as a realist novel rather than a symbolic one. There may be some merit to this opinion, especially when we consider how the events of the novel are closely related to Fitzgerald’s own life, especially the women in the novel.

For example, the character of Daisy is said to be modelled on Ginevra King. Fitzgerald met Ginevra when he was at Princeton and she was still at prep school. They exchanged love letters, but the relationship ended when Ginevra’s father bluntly told Fitzgerald that he had no business dating rich girls. This gave him a sense of inferiority and was the cause of his lust for wealth, much like Gatsby. In the novel Fitzgerald remarks that Daisy’s voice was, “full of money,” and Gatsby tells Tom, “She only married you because I was poor and she was tired of waiting for me.” This is very similar to Fitzgerald’s experience of love. Critics are divided on whether the women of the play are based on Ginevra or his wife Zelda; it is likely he used elements of both as inspiration. This direct link with Fitzgerald’s real life experiences may suggest that The Great Gatsby is more effective as a realist novel than a symbolic one.

The claim that the novel is more effective as a symbolic novel than a realist novel could be contested when we consider how Fitzgerald uses social realism in his writing. Social Realism is an international art movement that draws attention to the everyday conditions of the working classes and the poor, and who are critical of the social structures that maintain these conditions. While the movement usually applies to paintings, it can just as easily be applied to novels such as The Great Gatsby. The most obvious instance of social realism in the novel is the depiction of the Valley of Ashes. Fitzgerald deliberately places this after the extravagance of chapter one in order to have maximum impact on the reader. We are presented with an area that bears closer resemblance to the slums of the third world rather than an economically thriving western nation such as America. It is described as, “a certain desolate area of land,” and, “the solemn dumping ground.” The Valley of Ashes is based on a real location called the Corona Ash Dumps, further increasing the social realism. This stark portrayal of reality suggests that the novel is more effective as a realist novel than a symbolic novel.

Finally, it could be argued that The Great Gatsby is more effective as a realist novel than a symbolic novel due to Fitzgerald’s use of naturalistic realism. Naturalism was a literary movement from the 1880s to 1930s that used detailed realism to suggest that social conditions, heredity, and environment had inescapable force in shaping human character. Naturalistic works tend to focus on the darker aspects of life, including poverty, racism and violence. As a result, naturalistic writers were frequently criticised for focusing too much on human vice and misery. We certainly see these dark undertones in The Great Gatsby. If we take racism as an example, the form that Fitzgerald uses to describe to us the character of Tom Buchanan is decidedly naturalistic.

Fitzgerald wishes to convince the reader that Tom is a highly despicable character, but he does not come out and say such in so many words. Rather, he meticulously describes Tom’s actions so that the reader is left to draw no other conclusion. His views are clearly racist, evidenced by his choice of reading: “Have you read the Rise of the Coloured Empires by Goddard?” This refers to a genuine book that was around at that time, titled The Rising Tide Of Colour by Lothrop Stoddard, which increases the realism. Tom feels threatened by the rising power of racial minorities and wishes to preserve the archaic status quo. Fitzgerald’s skilful use of naturalistic realism would suggest that The Great Gatsby is more effective as a realist novel rather than a symbolic novel.

To conclude, after careful consideration we determine that The Great Gatsby is so far-fetched that it is more like a fairy-tale than a Realist Novel. However, it is undeniable that it has realistic and convincing characters, situations and events as well as having fairy-tale elements. I believe that the fairy tale elements are more apparent throughout the text. The opposing arguments have some merit but ultimately they fail to realise the true implications and context of The Great Gatsby.

The Great Gatsby is so far-fetched that it is more like a fairy-tale than a Realist Novel. (2020, Jun 02). Retrieved from https://studymoose.com/great-gatsby-far-fetched-like-fairy-tale-realist-novel-new-essay 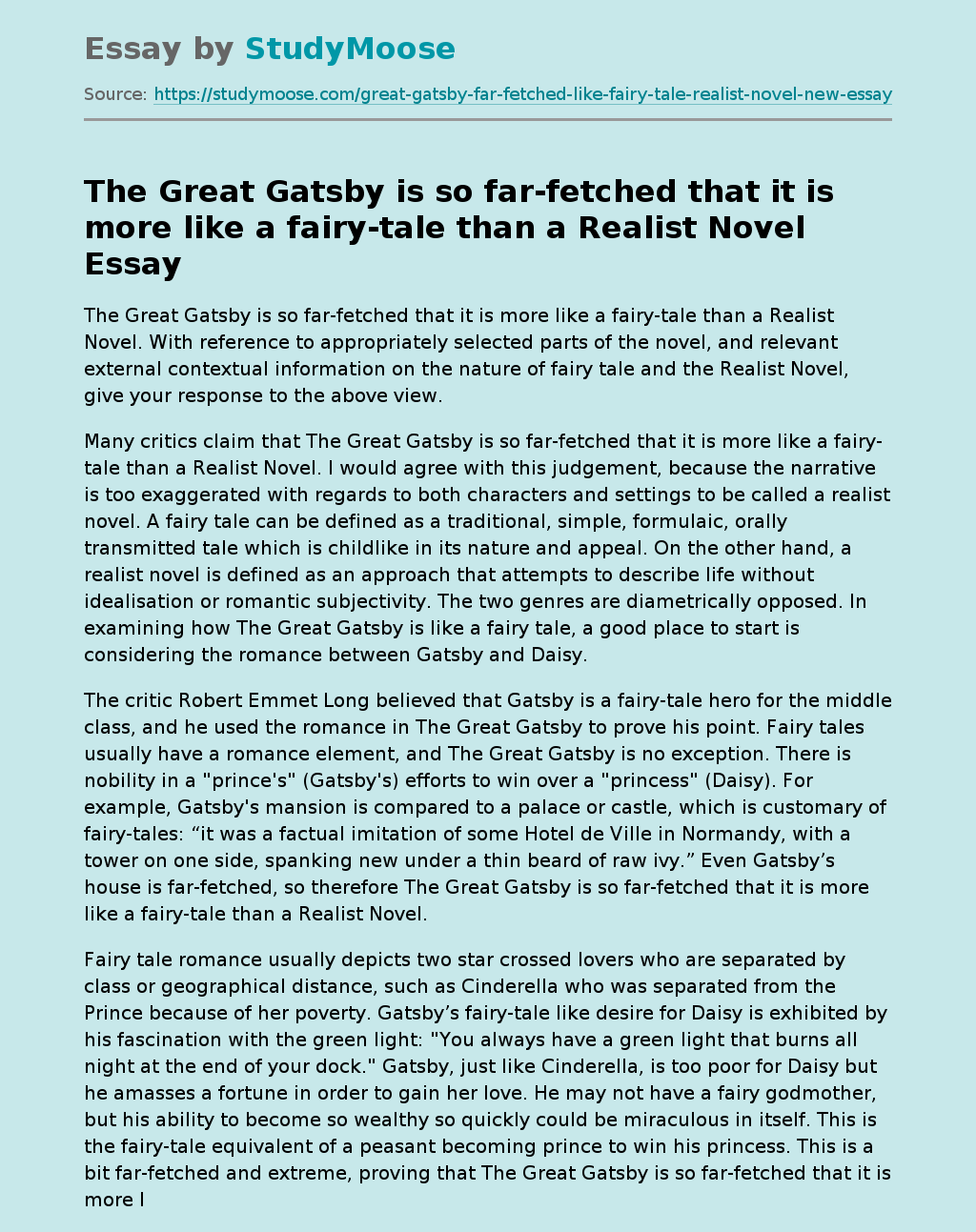