Fantasy Vs. Reality in Harry Potter and the Philosopher's Stone

Fantasy stories are commonly used to represent a particular reality that is present and visible in the society. As one of the best-selling fantasy novels in history, J. K. Rowling’s Harry Potter and the Philosopher’s Stone introduces one of the most loved and traditional hero in the persona of Harry Potter. Harry is an ordinary orphaned boy who is first unaware of the complicated future that awaits him in Hogwarts’ School of Witchcraft and Wizardry.

In this first installment of the Harry Potter series, Rowling introduces the fantasy world of Hogwarts and its residents which clearly contains actual references to the type of people who are outside of that fantasy world.

Don't use plagiarized sources. Get your custom essay on
“ Fantasy Vs. Reality in Harry Potter and the Philosopher’s Stone ”
Get custom paper
NEW! smart matching with writer

Rowling could have just written a straightforward fictional story that conveys the same message such as the fantasy novel but she preferred it in a fantasy setting to further elaborate moral principles, maturity, love, family, and the theme of good and evil. Writing fantasy stories provides more freedom in creatively presenting a particular reality than reality-based fiction.

Fantasy and Reality in the Character of Harry Potter

According to some critics, the reason behind the novel’s success in history is its ability to create an utterly different world where extraordinary characters experience normal problems. “The stories are chock-full of the right ingredients: quirky and courageous characters, magic, humor, whimsical and bizarre settings, and a convincing blend of fantasy and reality” (Silvey, 388). People can relate to the characters’ behaviors because they do not simply act as a stereotypical character that everyone is familiar with; but rather most major characters have complex personalities that is common to a human being.

The fictional character of Harry Potter is an 11-year old orphan living with his typical bully of a cousin Dudley Dursley together with similarly cruel aunt and uncle, Petunia and Vernon Dursley. His magical fate begins when he is summoned to the Hogwarts’ School of Witchcraft and Wizardry by the headmaster Albus Dumbledore. As he grows up, faces his journey, and adventures with his friends, Hermione Granger and Ron Weasley, he becomes the representation of a young boy growing up as he experiences predicaments concerning his growing popularity and the death of his parents. Despite the fact that the story is set in a fantasy world, Harry reveals a character very typical of a human being his age.

His frustrations, desires, and loneliness are based on emotions and feelings that is very typical for real people to experience. When he faces the Mirror of Erised, where the word “erised” means “desire” when read backwards, he manifests his longing desires just as how real people do. Desire is a major element of one’s life and to be able to control it can become frustrations such as in the situation of Harry when he wants to see his parents and meet them. However, the frustration leads to hatred as he discovers that it was Lord Voldemort, the major villain in the story, is the one responsible for his parents’ death.

The feud between the two characters can also be considered ironic as they are both responsible for each other’s demise. Clearly, social and moral issues such as greed, power, fame, and superiority become one of the dark themes of the story which is also present in the current society. These issues show how they are to blame for war, discrimination, and crimes in the real world as it is in the world of Harry Potter. All these are very evident today that Rowling criticizes such issues by including the old age battle of good and evil.

Fantasy Vs. Reality in the Hogwarts’ School of Witchcraft and Wizardry

Hogwarts’ somewhat represents a typical boarding school where students are disciplined and taught to live inside the school. Instead of academic subjects like Mathematics, Language, and Science, Hogwarts’ teaches subject like Herbology, Defense Against the Dark Arts, and Potions to enable them to use their gifts of magic in the right way.

These subjects are much similar to academic subjects as they would later become pre-requisites to the career that each student must decide on in the future. Apparently, this school setup correlates the normal setup of real-life school system and purpose. Hogwarts also reveals the concept of discipline that real schools follow such as forbidding students to roam around a particular floor in the building such as the third floor. The idea of Hogwarts also shows the predicaments that every individual encounters to prove oneself to society.

One of the social issues present in the novel is discrimination. The school’s division of school houses: Gryffindor, Hufflepuff, Ravenclaw, and Slytherin is the process on which the students are chosen and classified depending on each character and personality which produces much discrimination among houses.

The Gryffindor house contains the noble students which include Harry, Ron and Hermione; the Hufflepuff house appears to include students who have abilities which are considered lesser than the other houses; the Ravenclaw house contains the intellectual students; and the Slytherin house has the reputation to have the meanest students including Voldemort and Draco Malfoy.

This kind of discrimination is very apparent in our society and culture. It even starts in school where groupies and cliques are formed according to each member’s interests. The idea of racism is also addressed in the novel as some witches and wizards think less of “muggles” or people who are born out of normal human beings without any knowledge of wizardry and witchcraft. It is another form of racism as witches and and wizards are another set of people which are distinct in culture and abilities than regular people. Their sense of superiority over ordinary and powerless people represents the still manifesting white superiority in the world. It clearly signifies that the novel addresses several concerns and issues related to real life problems.

Philosophies in Harry Potter that is Inspired by Reality

Several philosophies in the novel have eminent features that are similar to many philosophies in history. For example, in the latter part of the story when Harry is visited by Dumbledore in the hospital, he tells Harry that, “After all, to the well-organized mind, death is but the next great adventure” (Rowling). He is referring to the death of Nicolas Flamel that is quite sacrificial in respect because by destroying the Sorcerer’s stone, he also dies as well. This premise likens itself to the concept of Christian sacrifice.

Jesus Christ sacrificed his life for the safety of humankind which is similar to the purpose of Flamel’s death. Destroying the stone would mean the failure of Voldemort to gain eternal life which can be a tremendous threat to the people in Harry Potter’s world. His sacrifice, therefore, reveals the philosophy of sacrificing for the greater good. Dumbledore’s belief that death is not the end but rather a beginning also shows comparison in relation to some well-known philosophers such as Buddha who believed that death is actually a beginning of something else.

The reference to “the well-organized man” means the wise man that has the ability to accept death as a part of life and not the end of life. This mindset can be considered somewhat related to religious and philosophical beliefs which are apparent in our society.

Harry Potter and the Philosopher’s Stone includes many allusions to reality that demonstrates extreme results due to its fantasy genre. By means of creating fictional fantasy stories, the author, J. K. Rowling, is able to convey clearer message of the battle of good and evil and how moral issues are addressed in the society. Rowling’s fantasy world such as Hogwarts does not differ much with the real world because it contains similar purposes and provides the same social problems.

She uses the fantasy genre to further elaborate and criticize what is currently happening in our society. Apparently, fantasy and reality goes hand in hand in producing a successful novel such as Harry Potter. It gives adult and children alike the opportunity to relate their reality in the fantasy of Rowling.

It is reality that is the major foundation of a fantasy novel as the plot and conflicts are usually rooted from real-life events only with a touch of creativity and extreme imagination.

Fantasy Vs. Reality in Harry Potter and the Philosopher's Stone. (2016, Sep 29). Retrieved from https://studymoose.com/fantasy-vs-reality-in-harry-potter-and-the-philosophers-stone-essay 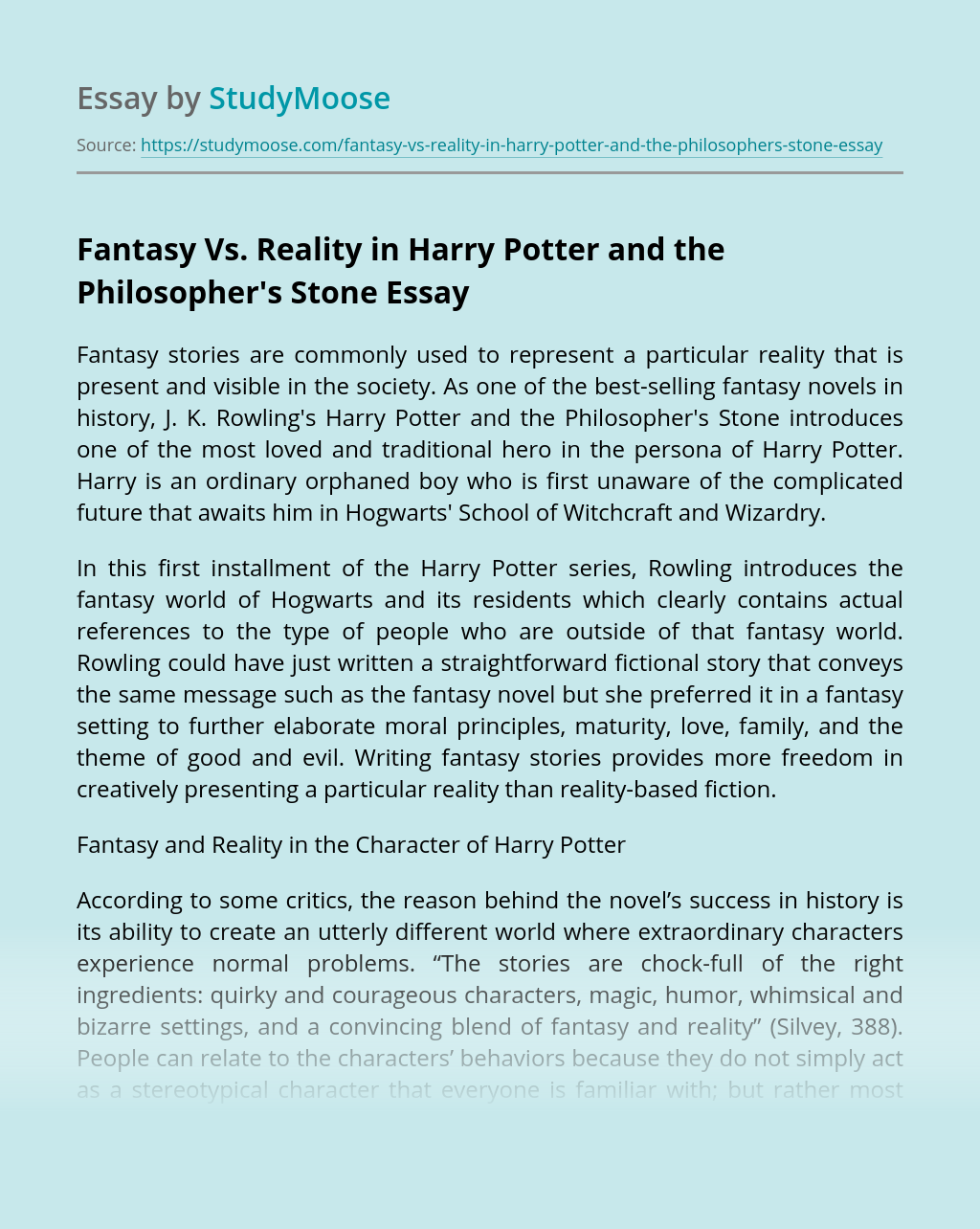