Harry Potter and the Sorcerer’s Stone: From Book to Film

Harry Potter and the Sorcerer’s Stone was the first of seven book series by J. K. Rowling first published on July 1997. It is about the adventure of an eleven-year-old boy who grew up with his aunt and uncle and later discovers that he comes from a family of witches and wizards. The film adaptation of the book was released in 2001 by Warner Bros. , and, like any film adaptation, has had its share of praises and criticisms. Some held that the film had been “faithful” to the book, but of course, just like in any other film adaptation, there will always be some alterations from the book from which film adaptations were based.

Don't use plagiarized sources. Get your custom essay on
“ Harry Potter and the Sorcerer’s Stone: From Book to Film ”
Get custom paper
NEW! smart matching with writer

Some of the criticisms of the film adaptation of the first Harry Potter series include the director, Chris Columbus, being “too slavish a devotion to the book and too little of his own creative input” (Silvain). Corliss criticized that “Columbus is content to make a student’s copy of the original master portrait.

” He held that “the Harry Potter film has loads of technical expertise but lacks the enthralling life of Rowling’s original. ” Indeed, the film adaptation had barely altered the story from the book.

Nevertheless, there were alterations and the film still falls short from the magical experience enjoyed by the readers. There are some minor differences in the film’s depiction of characters. As an example, Hagrid, who was described in the book as being “almost twice as tall as a normal man and at least five times as wide” (Rowling, 14), although depicted in the film as much taller to be “almost twice as tall” than any man, was not “five times as wide.

” These differences, however, are almost negligible because of the other characters brilliant depiction in the film.

Read more: Number of words in the harry potter series.

The depictions of Hogwarts professors were perfect: Dumbledore’s long silvery hair and beard marked him unmistakably the wisest, if not the strongest, wizard in the story; Professor McGonnagal’s commanding presence and Professor Snape’s intimidating presence were brilliantly played by the actors. The other characters’ depictions were superb, most especially the Dursleys, the Weasleys, Hermione and Malfoy. Harry’s Scotch-tape bound eyeglasses could also not be missed out. When it comes to the storyline, the film has altered a lot from the book without losing the overall content.

For starters, the film did not begin with the Dursleys, not with their indifference to witches and wizards, and most especially not with Uncle Vernon’s experiences, unwittingly of magic, on his way to office and back home, as was first presented in the book. Hagrid did not mention in the film that he borrowed the motorcycle from Sirius Black, who Rowling foreshadowed in the book as we learn from a later series that Sirius is Harry’s godfather. Also in the book, when Dumbledore left baby Potter in the Dursley’s doorstep, he left the letter with Harry clutching it, not beside Harry as presented in the film.

As Harry is growing up, the film lacks presentation on how the Dursleys, most especially Dudley, mistreat Harry. There was no mention of Mrs. Figgs; neither Piers nor Stonewall high from where Harry would be studying if he had not received the letter from Hogwarts was mentioned in the film. In the film, when Harry received his first letter from Hogwarts, it was Dudley who snatched it away from him, while in the book it was Uncle Vernon, and while the film showed that succeeding letters from Hogwarts to Harry was being burned or shredded into pieces, there was no presentation of Harry moving from under the stairs to a room next to Dudley’s.

When Hagrid finally brought Harry the Hogwarts letter in the little shack atop a rock in the middle of the sea on Harrry’s birthday, the confrontation between Hagrid and Uncle Vernon lacked the intensity that was presented in the book. Explanations of Hagrid to Harry about Hogwarts and his parents is also lacking in details in the film. Moreover, Hagrid and Harry did not left in the middle of the night during a storm in the book’s version of the story. Events in Diagon Alley presented in the film also lack faithfulness from the book.

The twisting trail to the vaults in Gringotts was omitted as well as Hagrid’s reaction to this. The scene in Madam Malkin’s shop where Harry met a boy, who we later learn to be Draco Malfoy, for the first time was also omitted. This is also where Harry was supposed to hear about Quidditch based on the book, as well as the different Hogwart houses and differences of witch and wizard lineages, which Hagrid later on explained to Harry. Hagrid did not leave Harry alone when he purchased his first wand; it was in Madam Malkin’s shop that Hagrid had left Harry to recompose himself from their trip through the Gringotts vaults.

At Ollivander’s, Harry tried many wands, more than three unlike what was depicted in the film, before the man attending him had finally found the right wand for Harry. Furthermore, Harry did not make the least indication of a spell in trying the wands prior to finding the right one as the man attending him had stopped Harry before he can wave the wands. The film also did not include Uncle Vernon being asked by Harry and actually dropping Harry off to the train station.

It was in Hogwarts express that Harry and Malfoy had their first confrontation; where Malfoy advised Harry not “to go making friends with the wrong sort” and Harry replying that he “can tell who the wrong sort are” by himself, in contrast with the film where this scene was presented after the first years entered Hogwarts through an underground passage by the lake. There was no song from the sorting hat, nor were there any Hogwarts song in the film. The events following Holloween night was presented in the film not exactly as it was described in the book.

Norbert, the Norwegian Ridgeback baby dragon that Hagrid raised, was not sent to Romania by the Ministry of Magic, but was sent there through Charlie’s friends. Harry and Hermione’s adventure of smuggling Norbert out of Hogwarts was never mentioned in the film. Harry, Hermione, Malfoy, and Neville’s detention in the forbidden forest also differed from how it was described in the book. The film skipped Harry being grouped with Hagrid and Hermione first before Hagrid decided that he should come with Malfoy and Fang as Harry is much braver than Neville and could stand up to Malfoy’s bullying.

Harry has also met three centaurs, even riding on the back of one. Perhaps the most noticeable difference between the film’s presentation and the book’s story could be found during Harry, Ron and Hermione’s adventure going after the sorcerer’s stone. In chapter 16 of the book, Harry played the flute given to him by Hagrid as a Christmas present to make Fluffy fall asleep and had no trouble getting past him. After going through the trapdoor, both Harry and Ron were having trouble with the Devil’s Snare and Hermione had to use the spell she had with Snape on Harry’s first Quidditch match to free them.

Then, all three went to catch the right key, each taking a broomstick, at the end of the passageway. The flying keys did not attack but were moving so fast that it was difficult to catch them. On the giant chess board, Harry, Ron and Hermione had to replace chess pieces to play the game, not Ron riding the knight’s horse. Furthermore, there was no indication in the book that the giant chess pieces were smashed into destruction. There were also no sing of any troll in a chamber after getting past the giant chess game.

Finally, Harry and Hermione had to solve a puzzle set up by Professor Snape as the last obstacle to enter the chamber where the Mirror of Erised had been moved to. This scene is totally missing from the film. The climax of the story, Harry’s confrontation with Professor Quirrel and Voldemort, had been faithful to the book, although in the book, Harry had not destroyed Professor Quirrel in the end of their confrontation. The film’s depiction of Voldemort’s face at the back of Professor Quirrel’s head was also slightly differed from the book’s description.

The book described it as “chalk white with glaring red eyes and slits for nostrils, like a snake” (Rowling, 293). Voldemort’s nose as depicted in the film was not very snakelike. There are a few more difference between the film and the book’s story: the film had not depicted Harry not being afraid of mentioning Voldemort’s name; Harry had played in two Quidditch matches in the book; Peeves antics were missing in the film; and Dumbledore did not explain Professor Snape and James Potter’s, Harry’s father, history. Simply put, the film does not have the detailed events presented in the book.

It has jumbled the events as it happened in the book while still able to present roughly the same story. However, for the Harry Potter fanatic, the most frustrating difference between the film and the book was the film’s lack of magical experience. For a film based on a magical fantasy book series, Harry Potter and the Sorcerer’s Stone film, ironically, had not been magical, missing out on some important details and suspense. On the other hand, the film tried to be as faithful to Rowling’s story. Even with omissions and alterations, the film basically presented the same story as Rowling’s.

It, however, lacked the details that Rowling had included in the book. Given the limitations of technology in computer graphics and animation, the film has brought Hogwarts to life, but could never match up to the experience that reading the book had. As a final note, while the film had a total gross of approximately $970 billion, it has surprisingly not met the expectation of fanatics and readers worldwide with its lack of magic and omissions of some scenes that were somehow important to the overall presentation of the story.

Harry Potter and the Sorcerer’s Stone: From Book to Film. (2016, Sep 06). Retrieved from https://studymoose.com/harry-potter-and-the-sorcerers-stone-from-book-to-film-essay 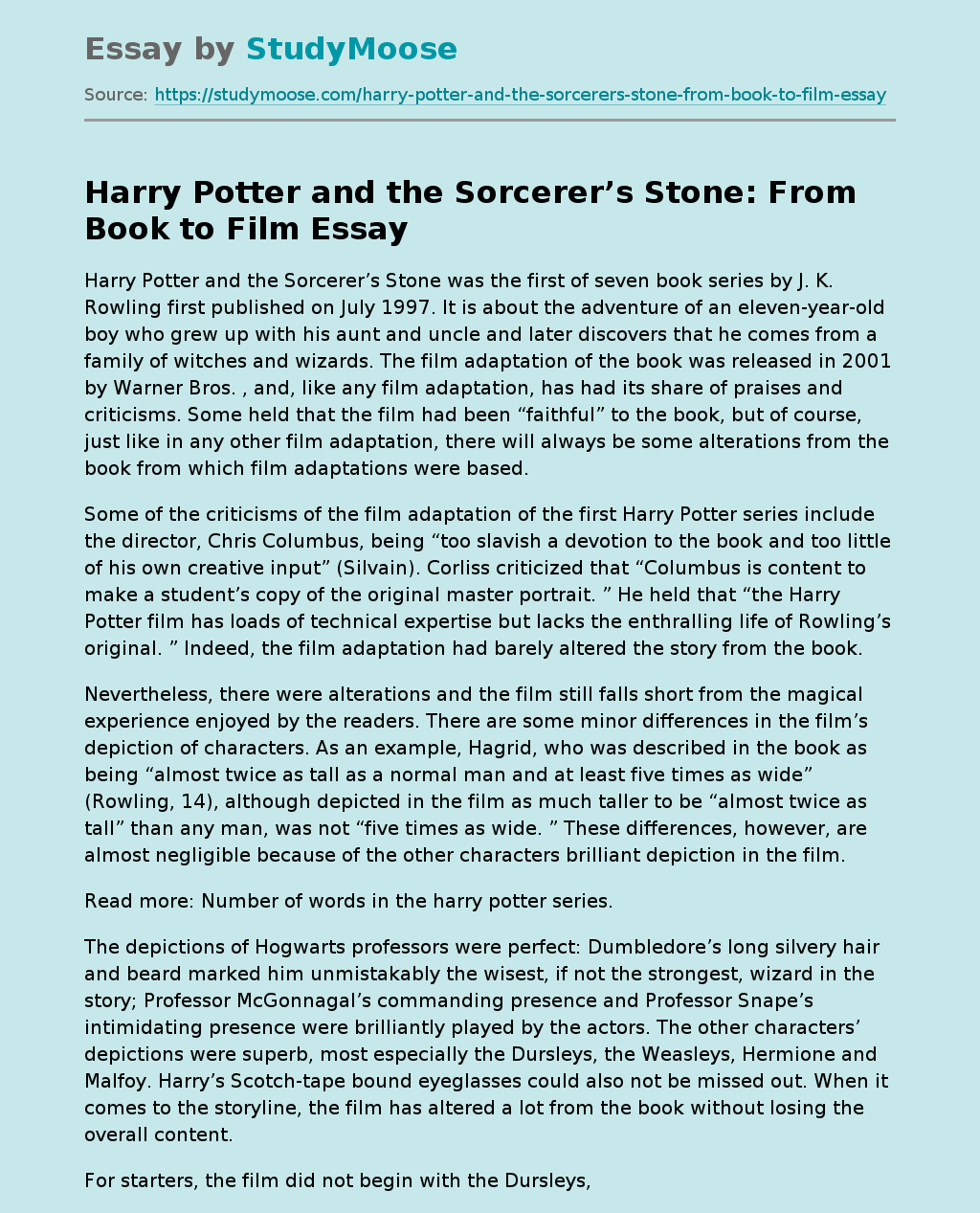