The two main characters of the plays Faustus and Oedipus Rex are very different from each other.

Don't use plagiarized sources. Get your custom essay on
“ Compare and contrast Oedipus Rex ”
Get custom paper
NEW! smart matching with writer

Faustus, the main character in Faustus, is not trying to save any civilizations like Oedipus is. Faustus is really trying to make himself a better person by learning black magic. He wants to learn evil to make himself more powerful as a person. He signs his soul over to the devil in exchange for twenty-four years of service by Mephistophilis. Greed is the main reason for the fall of Faustus.

He chose his own destiny; he knew that when he signed that contract his soul belonged to the devil.

Oedipus on the other hand, did not really have much of a choice in his fate. He was pretty much damned from the beginning. He was prophesized to kill his father and marry his mother, so his father and mother tried to change fate. But as the story goes, the prophecy came true. All Oedipus wanted to do was stop the plague from going through his city.

But it ended up that he was the cause, not the solution. His eternity was not lived out in hell, but spent exiled from Thebes.

Oedipus did not choose his fate as Faustus did. The characters of the two plays both suffered in the end, but one chose his and one had to live with his prophecy. Smith 2 The plots of the two plays are different from each other also. The plot of Oedipus Rex is for Oedipus to find out why the plague has struck his town, and how to get rid of it. But the plot ends up turning into what was prophesized to his parents a long time ago. Oedipus ends up finding out that he has married his mother and that he has killed his father. The whole play is a tragedy. There is no comic relief in it, as in Faustus with his practical jokes. In Oedipus the plot revolves around the fate of one man.

In Faustus the plot revolves around other people as well. There are other subplots in the play not just the plot with Faustus. Faustus and Mephistophilis go about causing trouble throughout different cities, really trying to cause evil wherever they go. In Oedipus, there is no other trouble in the play, just the problem with Oedipus killing his father and marrying his mother. The plots have nothing in common except how the end. In the end of Faustus, Faustus must spend all of eternity in hell. His soul now belongs to the devil. In the beginning of the play he did not believe in life after death, I bet he is hitting himself on the head now. In the end of Oedipus Rex, Oedipus cuts his own eyes out and gets exiled out of Thebes. He spends the rest of his life with out a home. The ultimate tragedy really, he just got stuck in the wrong place at the wrong time. 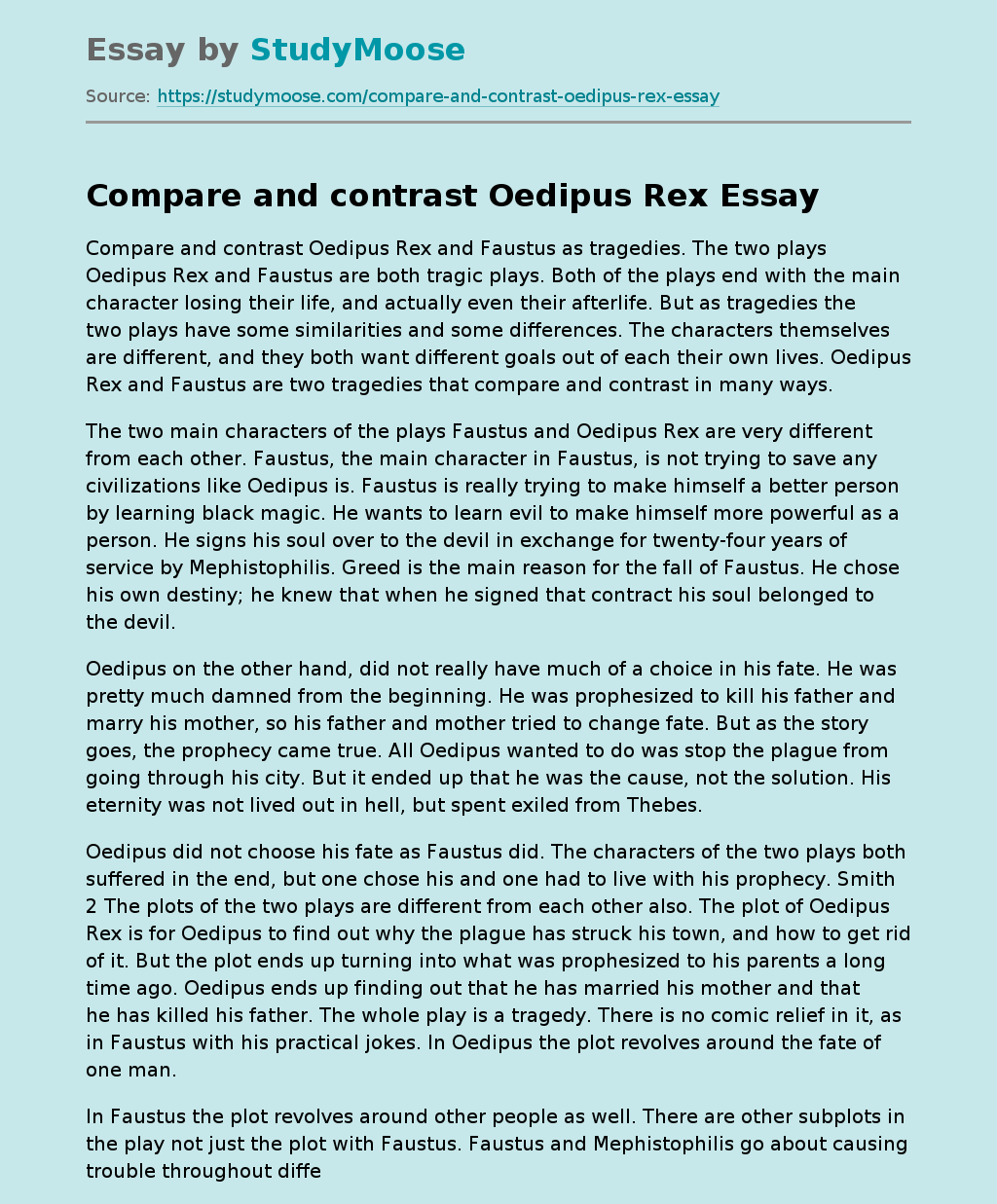