Oedipus kills his father and marries his mother. Is this due to fate or freewill?

In the play, Oedipus the King, the protagonist Oedipus, kills his father and marries mother thereby fulfilling the prophecy of the Oracle at Delphi. Taking a closer look at the actions of Oedipus, it would initially seem that his murder of King Laius, his biological father, and his marriage to his biological mother, Jocasta, was entirely his choice or in other words, due to freewill.

However, considering the fact that he still fulfilled the prophecy despite everything he did to prevent it from coming true, I believe that that he has been constrained to his fate from the very beginning.

Don't use plagiarized sources. Get your custom essay on
“ Oedipus kills his father and marries his mother. Is this due to fate or freewill? ”
Get custom paper
NEW! smart matching with writer

In other words, Oedipus killed his father and married his mother due to fate and not freewill. One of the main evidences that support that support the claim on Oedipus’ fate is circumstances that led him to commit the very actions that he wanted to avoid.

As shown in the story, when King Laius and Queen Jocasta of Thebes had a son, it was prophesized by the Oracle at Delphi that their child will kill his father and marry his mother.

As a result, Oedipus, as an infant, was cast out of Thebes and given to a shepherd, who was ordered to kill the child but was unable to do so out of pity. As a result, the shepherd gave the baby to another shepherd in Corinth, where he became the prince and son of King Polybus and Queen Merope.

Upon overhearing people at a banquet that he was not really the biological child of Polybus and Merope, he consulted Oracle at Delphi, who told him the same prophecy she told to Laius and Jocasta.

Upon hearing this, Oedipus fled his home and vowed never to return in order to avoid fulfilling the prophecy. Ironically, in his efforts to stay away from the people he doesn’t want to kill, he ends up at the kingdom of Thebes, where Laius and Jocasta, his biological parents and the two of the people involved in the prophecy, are king and queen, respectively.

In short, Oedipus actions were evidently due to fate because even though he flees Corinth, he runs away from the wrong people and towards the ones he really should avoid to prevent the prophecy from coming true. Although it can be argued that Oedipus actions were due to freewill because he did not know his biological parents during the first time he met them, this is simply not the case. Ultimately, he still ended up killing Laius on his way to Thebes and marrying Jocasta. In other words, the entire story of Oedipus more or less shows that inevitability of fate.

In his case, he was destined to fulfill the prophecy of the Oracle despite vowing never to do so. Since he thought he would end up killing his foster father, King Polybus, and marrying his foster mother, Queen Merobe, he left for Thebes but ironically killed his true father, Laius, along the way and married his mother after his arrival in the kingdom. The fact that he had did not know who his biological parents are simply meant that he is chained to the fate that has been pre-destined for him.

In short, the story of Oedipus best exemplifies the power of fate and of the gods, who were considered to be the rulers of man in the context of the play. It also shows the importance of prophecies during that time as these can accurately predict future events and fates. It can then be surmised that Oedipus was simply a puppet controlled higher beings and greater forces, one of which is fate. Despite doing everything to stop the prophecy from coming true, he still fulfilled it as if he had no choice or no freewill at all.

Oedipus kills his father and marries his mother. Is this due to fate or freewill?. (2016, Oct 14). Retrieved from https://studymoose.com/oedipus-kills-his-father-and-marries-his-mother-is-this-due-to-fate-or-freewill-essay 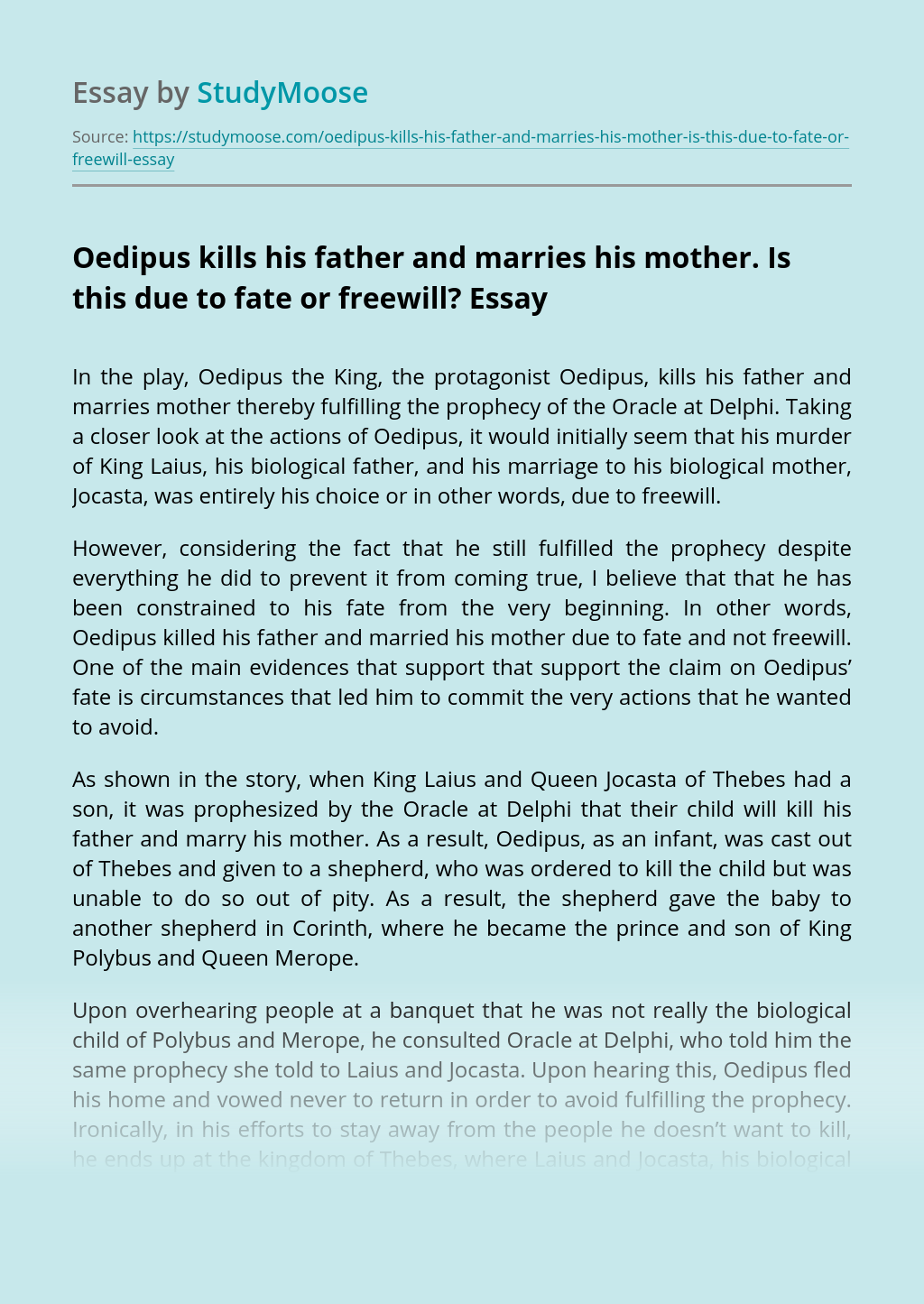