The fate of Oedipus and Pentheus

I am going to compare and contrast Oedipus from Sophocles’s Oedipus the King and Pentheus from Euripides’s Bacchae. The difference between both of them is that Oedipus encounters the face of truth after performing the actions and as a result, his heart is surrounded with the feeling of pain and sorrow leading him to purposely punish and take revenge against himself whereas in the case of Pentheus, his foolish and grumpy attitude leads him to perform actions in temptation which results in unknowingly punishing himself with death by the hands of his own mother and thus helps Dionysus to take revenge against him and his family.

Don't use plagiarized sources. Get your custom essay on
“ The fate of Oedipus and Pentheus ”
Get custom paper
NEW! smart matching with writer

Speaking about Oedipus, he was the king of Thebes and an excellent ruler of his times. He believed in being fair to his citizens and was a loving and merciful king. As the entire city of Thebes is attacked by a harmful disease known as plaque, he calls for Tiresias to give a solution to the problem, that is when he learns that he himself is the culprit as he has done brutal deeds of marrying his mother and killing his own father.

The Quote below supports the above thesis statement in detail Then I would not have come To kill my father and marry my mother infamously. Now I am godless and child of impurity,

Begetter in the same seed that created my wretched self. If there is any ill worse than ill, That is the lot of Oedipus (Oedipus the King.

1358-1363). When Oedipus acknowledges the truth of his life, in a moment his feeling of pride in being an honest and loyal king transforms in to someone who is a murderer and not worth being called a human. As we can clearly understand from the above passage that Oedipus is cursing himself as he is the murderer of his father and the woman he married is none other than his own mother. His heart is cluttered with pain and suffering as he comes across the truth about his partner.

The word “godless” signifies of being immoral or having a devil attitude and not worshipping god. Oedipus symbolizes himself with the word godless as the deed performed by him made him a sinner although he was a firm believer in god. The words “child of impurity” means something which is not with a pure feeling and Oedipus uses the words for himself as he has committed an intensely impure deed of marrying and sleeping with his mother and thus have become impure in thoughts and action. It is indeed an unfortunate situation where Oedipus has innocently landed himself.

When he says, “Begetter in the same seed that created my wretched self” (Oedipus the King. 1361) it means that Oedipus is ashamed of the fact that he made babies with the woman who once created his own identity by giving him birth. He is unable to digest the fact and believe that he slept with his own mother. When Oedipus says, “If there is any ill worse than ill” (Oedipus the King. 1362) means that he has become a victim of the worst thing that can ever happen to humankind in this world. He feels as if he has betrayed his parents and all the gods and so he deserves the toughest punishment ever received by any human in the whole universe.

Further when Oedipus comes to know that his life has been based on the seeds of evil deeds, he decides to take revenge against himself as he is ashamed of the actions committed by him. The Quote below from Oedipus establishes the above point Darkness! Horror of darkness enfolding, resistless, unspeakable visitant sped By an ill wind in haste! Madness and stabbing pain and memory Of evil deeds I have done! (Oedipus the king. 1313-1317) The above passage illustrates the feeling of guilt that compels Oedipus to punish himself harshly. The words “Horror of darkness enfolding” means the danger or the terrifying effect of darkness.

Oedipus uses the word darkness to emphasize his blindness. He understands now that all these years he was blind to the truth of his life and so now he wanted to hurt himself by making himself physically blind in order to take revenge for his own actions. The word “resistless” means impossible to resist or overpowering. Oedipus is not able to resist from punishing himself as he feels burdened by the terrible deeds performed by him of killing his father and taking his own mother as his wife. Oedipus uses these words to express his feelings and emotions while he his hurting his own body and soul.

The statement made by Oedipus, “Madness and stabbing pain and memory” (Oedipus the king. 1316) signifies his frustration and disappointment to such an extent which has led him to stab his eyes with knife just as the drift of the sin committed by him is stabbing his heart. He does not have a control on his mind anymore and his suffering is unbearable. The words “evil deeds” symbolizes the cruel actions of Oedipus as he murders his own father and gets children from his own mother. Thus, we come to learn that the reaction of Oedipus to the whole incident is by taking revenge against himself for his own wrongdoing.

Speaking about Pentheus, he was the king of Thebes and had a very arrogant attitude. He thought that he was even supreme to god and thus did not feel the need to respect the god. The Quote below from Bacchae explains the above point I shall give your god the sacrifice that he deserves. His victims will be his women. I shall make a great slaughter in the woods of Cithaeron. (The Bacchae,796-798) From the above quote, we can see that Pentheus is full of pride of being a king and thus disrespects god and is ready to sacrifice all the bacchants in order to teach a lesson to the god.

The word ‘deserves’ means here that he will take revenge against the god by treating him badly by killing all his bacchants. The words ‘great slaughter in the woods of Cithaeron’ means that he would have a huge celebration by sacrificing the women and thus humiliating the god. Although he thinks himself to being very powerful and witty, makes a mistake in recognizing the real intentions of Dionysus. Thus, the utter foolishness of Pentheus for trusting the motives of Dionysus leads him to death by his own mother. The Quote below from Bacchae explains the above point

“No, no, Mother! I am Pentheus, your own son, the child you bore to Echion! Pity me, spare me, Mother! i have done a wrong, but do not kill your own son for my offense. ” (The Bacchae,1118-1121) The above passage illustrates the efforts taken by Pentheus to convince her mother to not kill him when he realizes his mistake of trusting Dionysus and at the same time of disrespecting him as the god. He tries his best to explain to his mother about his identity but as he is dressed in women clothes and his mother was not in her senses so she ends his life very cruelly.

The line “No, no, Mother! I am Pentheus” shows the in depth of request and pleadings that Pentheus does to his mother in order to not punish him with death. The words “i have done a wrong” tells us that he realizes his mistake and is pretty aware of the consequences of his actions and thus wants to some how escape from the terrible fate gifted to him by Dionysus. Thus, the above illustrations clearly signify the difference between the situations of Oedipus and Pentheus and the way they react to their respective diminishing fates.

The fate of Oedipus and Pentheus. (2016, Jul 03). Retrieved from http://studymoose.com/the-fate-of-oedipus-and-pentheus-essay 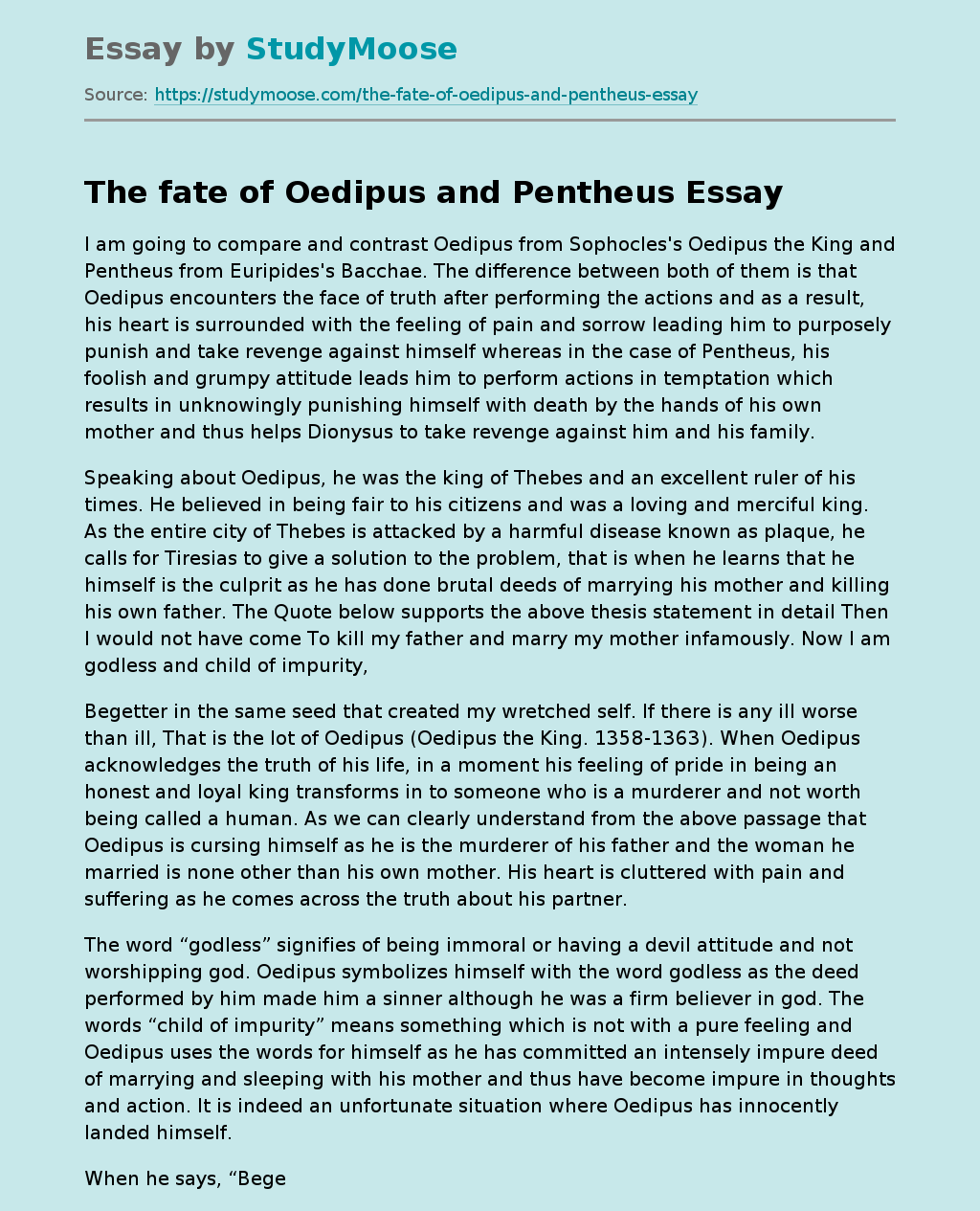