Spain colonized the Philippines for almost 333 years so it is evident that there are visible proofs of the Spanish influence in our beliefs or religion, political systems, language, culture and society. We say that done are the days when we were captured but we fail to realize the Spaniard’s influences that we practice up until now. It is evident that we still practice the Spanish influences as a way of life of Filipinos. To start off the best example of this is the influence in our religion.

Don't use plagiarized sources. Get your custom essay on
“ The Spanish Influence ”
Get custom paper
NEW! smart matching with writer

They were the first who introduced Christianity to our country and converted the early Filipino inhabitants from primal religion to Roman Catholicism. This is not just an influence in religion but also a permanent influence in culture and society.

An influence in the culture and society, in the sense that they developed systems for Christianizing Filipinos, one is the encomienda, charity organization wherein Spaniards are rewarded for their charitable works or for the collection of tributes for the church from the natives living within the boundaries and in return for their given tributes the encomienderos will look after their spiritual welfare and the solemnity of the community.

While other one is the reduccion system, wherein natives that lived on the outskirts of town undergo resettlement in order to gather them into communities and villages so that they can be near the premises of the church in that way the church can play a central role in the citizen’s lives. This type of structural organization of buildings and houses is still found today everywhere across the country, this symbolizes the Spaniards’ cultural influences in the Filipino lives.

Remodeling the Filipino culture and society in accordance to the Spanish standard. Another is the Spaniard’s influence to the Philippine political system, the title of the positions in congress may have changed but the structural organization has a distinct resemblance to that of the Spanish rule, for example alcalde mayor down to the cabeza de barangay that plays similar roles as the present governors down to the barangay captains they share the same purpose of enforcing the law and imposing uncorrupt leadership over their constituents. Lastly, is the Spanish influence to the Philippine language, the Filipino people has several native languages like Cebuano, Bisaya , Ilonggo, Ilocano, Chavacano and many more but still if you analyze it carefully they are just thousands of Spanish words that we borrowed or adapted from the Spaniards or the so called Spanish “loanwords”.

Their influence is evident even by the way we name our utensils (kutsara, plato, etc.), counting numbers (uno, dos, tres), and even our surnames (Villanueva, Estacion, Oracion). Good or bad we can’t deny the Spanish influence in the Filipino culture because their influence is permanently embedded in our culture and it cannot be undone. But nevertheless we responded to it selectively which means we only adapted those influences that seemed to be fitting to the progress of the country, enabling us to blend with the indigenous lifestyle therefore producing our own Philippine cultural heritage. 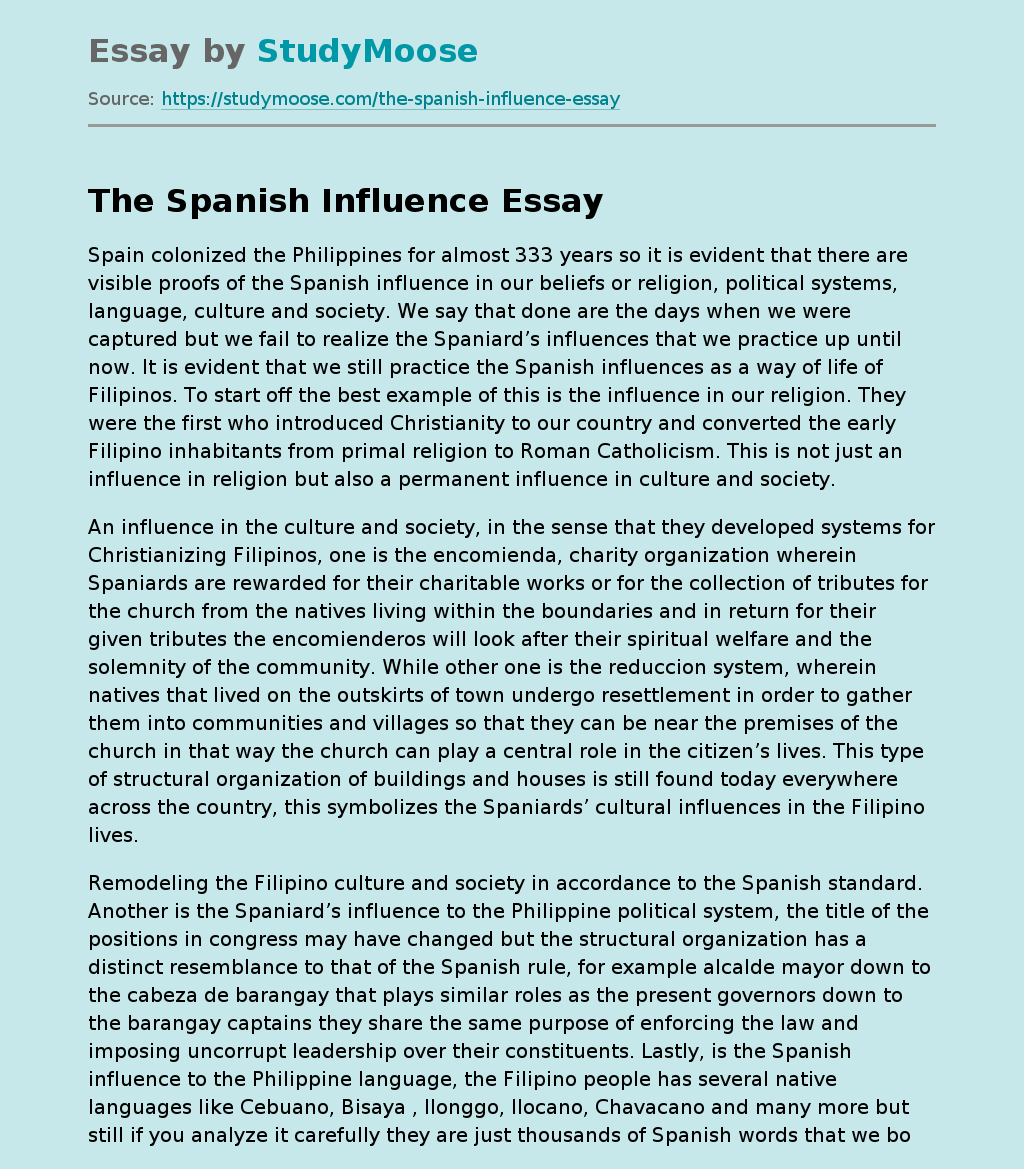