Effects of Europe's Colonization of Africa

Imperialism is the political, economic, and social control by one country over another country. In the 1800’s, many European countries began their imperialism of most of Africa. But when the Europeans were finally forced out, the government, economy, and social life were in ruins because a lack of concern by the Europeans, and their hasty decisions.

The effect of this was that many ethnic and religious groups, and even sometimes families, were split up, causing mass havoc and chaos. The Europeans also decided that they were going to implement their own religion into the African peoples. Many times, if an African resisted, he would be beat for his religious beliefs because he would not convert to Christianity.

Mostly, this only angered the African people. Overall, there was simply a total disregard for African life throughout the imperialism of Africa. Many Europeans had views that were contradictory. One such example is Henry Morton Stanley. Although he claimed to accept the Africans, he often portrayed them as childlike and ignorant. However, he was the ignorant one, not realizing what he was saying. Maybe it was not that he did not realize what he was saying, but he was trying to satisfy one group, while portraying his true personality to another.

Economically, the Europeans depleted many of the resources that Africa had. The countries went in, plundered what they wanted, and sold it to their home countries, with the Africans receiving none of the profit. This can be likened to someone discovering a gold coin in a neighbor’s backyard, but declaring that it was their’s because they found it. This wouldn’t happen most places, but since the Europeans were the ruling powers of the time, there was no one to stop them. But what resources the Europeans didn’t completely plunder, they didn’t teach the Africans how to effectively make a profit from them. The Africans relied on the Europeans for their economy, because before their ethnic and religious groups had been separated, there was no need for an economy.

But since the different areas had been reestablished as countries with peoples within its borders that fought, one had to be established. The Africans had no knowledge of how to run an economy, and as a result, there is an economic problem that still exists in Africa today. The biggest economic impact on Africa was also a social impact. Slave trade. It is probably one of the most significant issues to ever be written as history. The slave trade was the biggest exploit of Africa by the Europeans. Seeing that the Americans needed manpower for their large agricultural-based economy, the Europeans saw yet another economic road to riches. The Europeans thought of the Africans as inferior, and seeing that they could get ride of some of the resistance, they began to sell the Africans to plantation owners. This produced money for the Europeans, and separated many African families forever.

Looking back on this problem, had the Europeans shown a little bit more concern for the Africans and thought about the consequences of their actions, the social, economic, and political problems that exist today in Africa would be lessened or even non-existant.

Effects of Europe's Colonization of Africa. (2016, Jul 20). Retrieved from http://studymoose.com/effects-of-europes-colonization-of-africa-essay 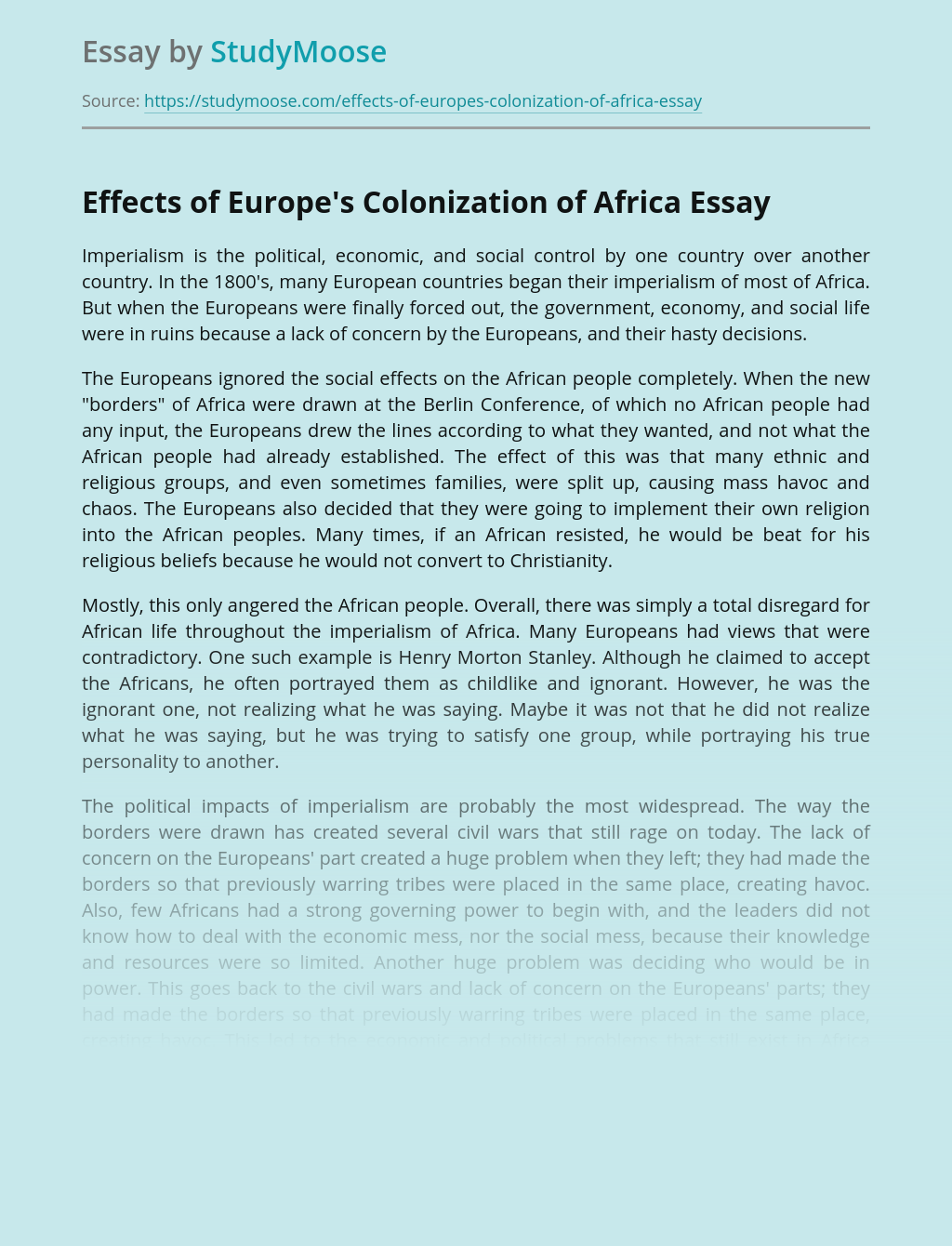 Don’t waste time
Get a verified writer to help you with Effects of Europe’s Colonization of Africa
Hire verified writer
$35.80 for a 2-page paper
Stay Safe, Stay Original