Colonization During The Scramble For Africa

After the Berlin conference, European powers occupied and colonized areas in Africa, in order to gain resources. But many Africans weren’t too happy with the idea of the Europeans coming in and controlling them. During the scramble of Africa, the actions and reactions of Africans was that some surrendered their territory and control over to the Europeans, while others rebelled against them. Others tried to appeal through religion and believed culture would give them an upper hand.

One of the main actions and reactions of Africans during the European scramble for their nation was that they surrendered their own territory and gave the Europeans control over to them.

For example, document one is a form of contract by the Niger company to administer and develop the Niger River delta. This cedes control of African territory over to the British, that was later said to be signed by many African rulers. British people wanted to have legal control over to Africans, so the Africans were compliant and obedient.

Some Africans didn’t just surrender their land, they took matters into their own hands and refused to be helped by the white men, they rebelled and resisted. For example, in document two an Ashanti leader declines the British offer, of being under the protection of the British, and states that his people will remain independent. This document states that they don’t want help from the British. “..arrived at the conclusion that my kingdom of Ashanti will never commit itself to any such policy. Ashanti must remain as of old and at the same time remain friendly..” Also in document in document six the Ashanti queen mother writes a speech saying that if the men don’t go and fight the women will. “We will fight the white men. We will fight until the last one of us falls on the battlefields.”

This shows again that they wanted to fight back and not just stand there. In document eight a German military officer states in a German military weekly newspaper account that the Africans believed that a spirit had given them medicine to fight back and that with this it would make them stronger. “The medicine would also give invulnerability acting in such way that the enemy bullets would fall from their targets.” This shows that the Africans were fighting back and rebelling against the white men. Finally in document seven, a leader of the Herero people wrote a letter to an African leader encouraging other African leaders to fight back and to not surrender under the British power. “Let us die fighting rathe than die as a result of maltreatment, imprisonment, or some other calamity.” This again shows that another action and reaction of the Africans during the scramble for Africa was that they rebelled and resisted.

While some Africans rebelled or surrendered, others tried to appeal through religion and believed their culture would give them an upper hand. For example in document 3 an emperor writes a letter to Britain, France, Italy, and Russia to try to influence them not to invade Ethiopia. He uses Christianity to convince his enemies. “But we hope that the Christian powers advised by our savior, Jesus Christ will restore sea coast boundary to us…” He states that god has protected Ethiopia and will continue to do so, Europeans should be friendly to them because of their religion showing that culture was important in the Africans resistance. Also in document 5 is a painting of the Ethiopians victory over the Italian troops and it is seen that the Ethiopians are winning. Although they didn’t have big guns they are seen playing drums and using their culture showing that they don’t need technological advances to win a war all they needed was their cultural beliefs.

Another document document that uses appeal towards the white men is document nine where an African chief speaks to German Catholic missionaries to show the brutality of the Germans. “You think just because you have guns, you can take away our land and possessions.” He wanted to appeal to the German missionaries by hoping that he would influence them by showing them the cruelty that the Germans are against the Africans. This shows that Africans tried to appeal through religion and culture was used as secret weapon towards the white men.

African nations responded to colonization of the Europeans by either surrendering land and control, rebelling and resisting, or appealing through religion and using culture as a benefit. The scramble for Africa was a difficult time for Africans and they all reacted differently, some accepted their fate and others fough it.

Colonization During The Scramble For Africa. (2016, May 13). Retrieved from http://studymoose.com/colonization-during-the-scramble-for-africa-essay 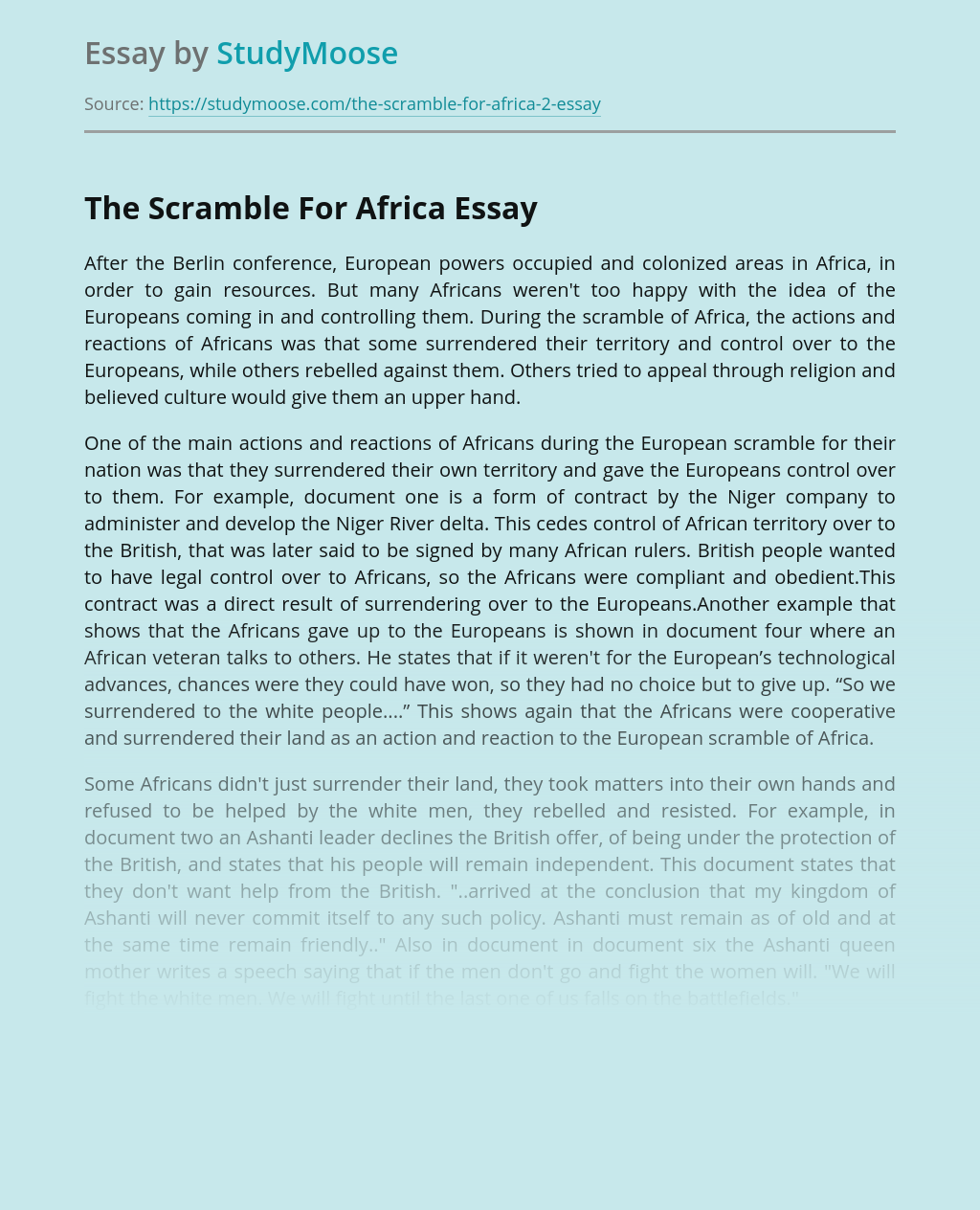 Don’t waste time
Get a verified writer to help you with Colonization During The Scramble For Africa
Hire verified writer
$35.80 for a 2-page paper
Stay Safe, Stay Original