Should Kroger Pay Now For What Ralphs’ Employee Did Then?

Should Kroger Pay Now For What Ralphs’ Employee Did Then?

Question 1: Assuming that the store and district managers of Ralphs received complaints about Misiolek’s behavior starting in 1985, but that these complaints did not reach Ralph’s headquarters in Compton, do you believe that the judge is right in holding that the company as a whole should not be held responsible for his actions?

Should the company be held responsible for policies that prevent complaints from reaching headquarters?

Ralphs Grocery Co. should be held responsible because Ralphs’ management did not facilitate feedback, complaints from employee to headquarter. There was also no control mechanism on Ralphs Grocery Co. The most important thing that should be underlined is In April 1996 several women already complained to Ralph’s management but the company did not take any action to discipline Misiolek. Misiolek was not removed from his position as store manager, but instead moved the complaining women to other stores.

Question 2: What kind of penalty do you believe would be appropriate for Ralphs? In your view, was the .

The penalty should be compensatory and punitive damages. It would be such a good idea based on compensatory justice principal. The $33.3 million penalty is excessive depending on how much the cost to rehabilitate the victims and how much the victims were aggrieved. I conclude that $33.3 million penalty was excessive because the psychological impact for some employees was not seriously same with. Except for those who was grabbed, touched, patted, hugged, touched their breasts which was way more offensive should be give much more than rehabilitation cost penalty.

Question 3: Should Kroger have to pay for events that happened before it took over the chain of supermarkets?

Ethically Kroger should not pay at all. But actually it depends on the acquisition contract between Kroger with Fred Meyer and Fred Meyer with Ralphs.

Question 4: Many states (but not California) adopt federal rules that place a cap of $300,000 on punitive damages in harassment cases. Is such a cap a good idea from an ethical point of view? Explain.

In consideration same with question number two, so it is not good idea for flattening punishment. It should meet the cost to rehabilitate the victims and how much the victims were aggrieved. Jail punishment should be considered.

Question 5: What can a company do to make sure that a situation like Misiolek’s does not occur? Why do you think Ralph’s allowed Misiolek to continue managing stores?

A policy that should be exist are written with zero-tolerance policy prohibiting sexual harassment, conduct some control mechanism by facilitating employee feedback, online complain media, supervisory for manager, All complaints must thoroughly investigated. Ralphs allowed Misiolek to continue managing store because of his capability to achieve profits at the stores that he manage and of achieving excellent bottom line figures at those stores.

Question 1: What financial impact do you think the lawsuit could potentially have on Wal-Mart?

If the law suit was successful the company would have to pay all the compensation amount which was around 86 million dollars to its entire 1.6 million female employees .Which in short would be a big blow to the company’s financials, and also with the deteriorating image caused by the issue they might possibly lose out on an considerable amount of customers leading to further financial implications. It would also result in higher prices in the store because the company would try to make up for all the loss incurred cause of the particular suit.

The major complaints launched by the women were that the company (wal-mart) discriminated against female employees in promotions pay, management training and job assignments. The women stated that promotions in wal-mart were biased towards men, where men were promoted much faster and at a much frequent rate then women. They also stated that there was a pay gap between men and women where two people of different gender on the same positions were paid differently and women were often paid fairly lower than the men. I think feel the complaints are valid.

If you are in a job and you see other coworkers getting hired whom are less qualified than you are then I think that the complaints are valid. If more than one complaint is being made about the company then an investigation is warranted. The complaints are justified if you apply for a position or inquire about a position and the company doesn’t give you an opportunity but then turn around and hire a male whom is less qualified than you are. That’s reason to make a concrete decision and go forward. I would have done the exact same thing.

Question 4: What, if anything, do you think Wal-Mart should do to correct these discrepancies? Should the company institute an “affirmative action” promotion program for female employees? If so, what should this program look like?

To correct the above issues wal-mart should try and place an monitoring system which would monitor the promotion procedure and the ratio in which male and female employees are promoted, try and specify the promotion criteria and wage structures and make it’s even for all employees regardless of their gender so as to avoid situations like this in the future. Strict action and measures should be taken against people encouraging gender discrimination in the company i.e the managers as stated in the case.

Should Kroger Pay Now For What Ralphs’ Employee Did Then?. (2016, Apr 22). Retrieved from http://studymoose.com/hould-kroger-pay-now-for-what-ralphs-employee-did-then-essay 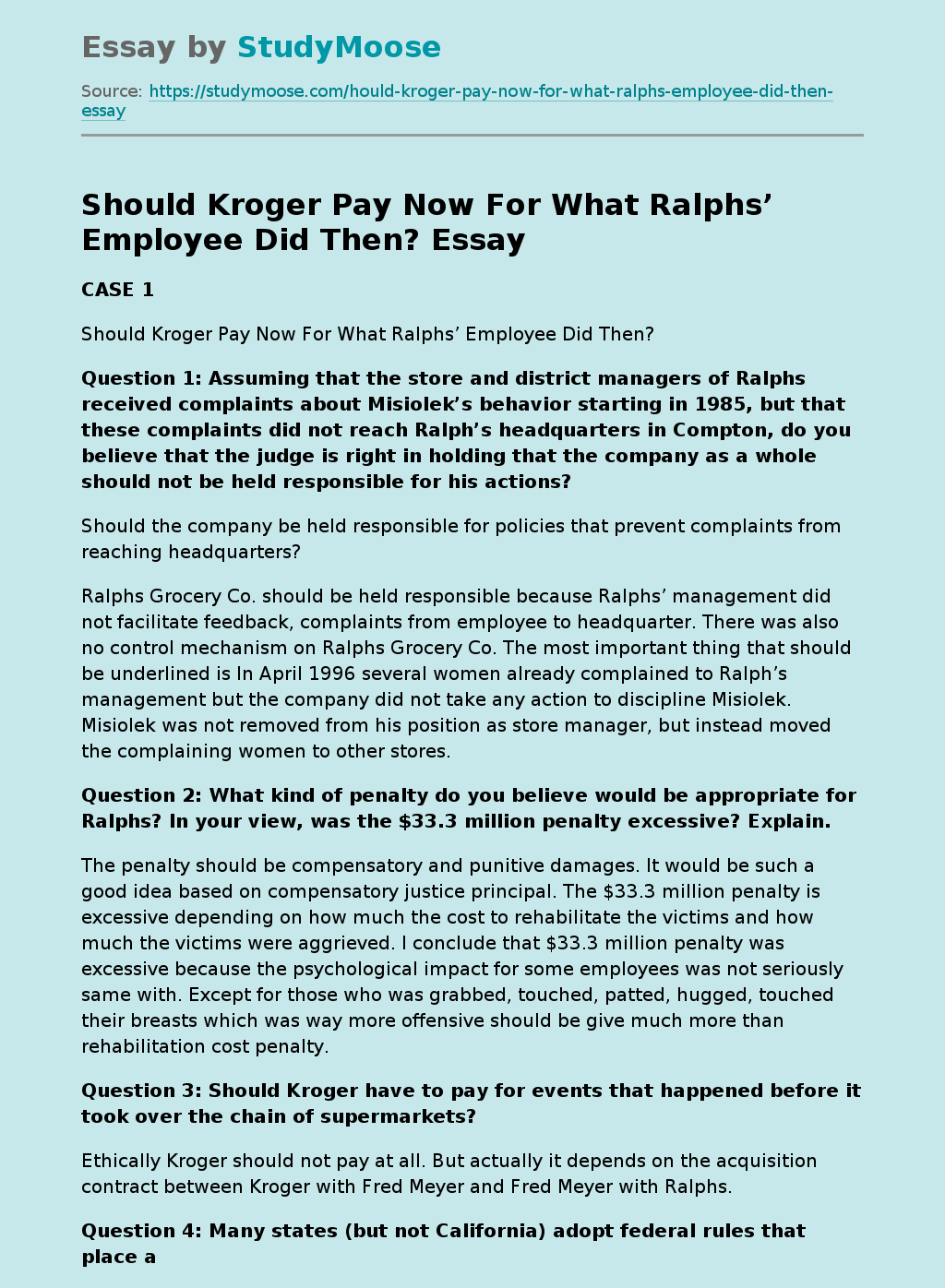