“Nationalism united people into nation- states, toppled empires composed of many ethnic minorities, and contributed to the outbreak of wars in the nineteenth century. How would you evaluate this statement?”

Nationalism is a common patriotic passion for one’s nation and fellow nationals that united, and still unites certain groups of people. Nationalism can cause for the birth of loyalty to ethnic minorities, which have potential to cause many historically significant events. It was a force that caused conflict in, and shaped the paths of Italy, Germany and France, among the other great European powers of the time.

Don't use plagiarized sources.
Get Your Custom Essay on Nationalism DBQ Just from $13,9/Page

Another group of people that was heavily impacted by the effects of nationalism were the Italian people. In 1850, Italy was ruled by many different empires. They were separate states with no unification whatsoever. The Northern regions were richer than the south, and the two areas had nothing in common. Italy had lack of unity, which is shown in the fact that Mazzini wanted a Republic, the Pope wanted a confederation, and Charles Albert wanted a kingdom. When Cavour rose as a prominent nationalist figure in Italy, he used many tactics to promote nationalism. He encouraged trade, expanded the transportation options, promoted agricultural production, and joined Britain and France in the Crimenian war against Russia. These tactics eventually proved to create unity in Italy because of a common economy, industry and common enemies. This is supported by Boyd Shafer’s saying that for nationalism to exist, it is necessary for people to share a common enemy, a common pride in achievements, and some common economic institution.

Another Italian Nationalist figure in Italy was Giuseppe Garibaldi. In 1861 he made a speech in which he tried to unify the Italian masses who were truly devoted to the nation. In his speech, he called for a greater commitment in an attempt to weed out hypocrisy. He uses the metaphor, “Let him who loves his country in his heart, and not with his lips only, follow me.” (Document 4)

In the 1800’s, German was spoken all through Prussia, the western half of the Austrian Empire, and many small states. There was much conflict in uniting the German states, including religious conflict. Otto von Bismark was a nationalist who lived during this time, who, “…some people feel single-handedly unified Germany and started it on its road to greatness.” Bismark’s method was crafty. He united Germany by creating a common enemy, and by fueling war. He expresses this in the metaphor “blood and iron.” (Document 5)

Nationalism’s influence on the development of the great European powers will not soon be forgotten. Under the watchful eye of great leaders such as Cavour, Garibaldi, von Bismark, and Mazzini, Nationalism tore apart great empires, united nation- states that had previously suffered from long standing conflict, and fueled many progressive wars. Allegiance and zeal for ones nation is what sparks nationalism, and nationalism is what sparks change. 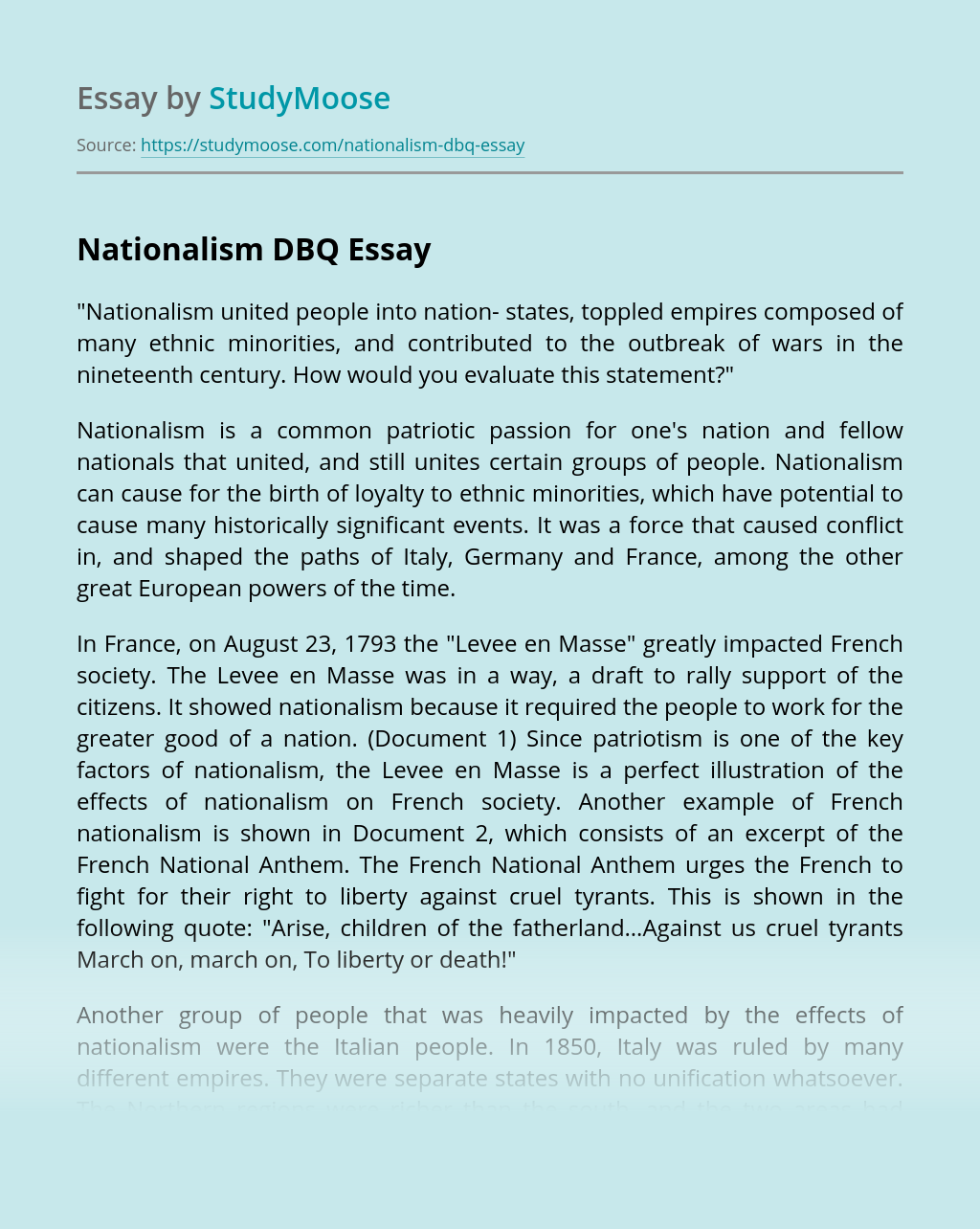 Rate this post “Set during World War II, a story seen through the innocent eyes of Bruno, the eight-year-old son of the commandant at a concentration camp, whose forbidden friendship with a Jewish boy on the other side of the camp fence has startling and unexpected consequences. ” The story of the boy in the...

Rate this post The 1993 drama “Swing Kids” starring Robert Sean Leonard and Christian Bale is overall a very good movie. The film is set in Nazi ruled Germany in the year 1939 and tells the incredible story of three boys and their love and fight for swing music. Swing Kids is a remarkable display...

Rate this post In his book “Night”, Elie Wiesel describes the scaries he had to go trough throughout Holocaust when Nazis took control of Hungary. He was still a teenager at that time, at that experience had frightened him for life. The book war composed in the mid fifties the times when Soviet Union was...

Rate this post What was the significance of D-Day to the outcome of World War 2? D-Day happened on 6th June 1944 after five years of war with Germany. D-Day was an invasion towards Germany by a massive military force that set out from England towards France. It was going to take over Nazi Germany...