Nationalism is based upon the idea that each individual will be loyal to their nation in which they construct. Nationalists support ‘organic communities’, whereby society is naturally divided, therefore each nation holds their own national identity. ‘Inevitably’ suggests that rivalry and conflict is certain. However, looking at the different branches of Nationalism, the inevitability of conflict varies. The Liberal Nationalists would not consider conflict as inevitable, which shows their naivety to the xenophobic ideas of Nationalism, as it promote a distinct ‘Them’ and ‘Us’ attitude, which Liberal Nationalists ignore.

Don't use plagiarized sources. Get your custom essay on
“ Does Nationalism Inevitably Breed Rivalry and Conflict? ”
Get custom paper
NEW! smart matching with writer

National identity and maintaining order and stability is of key interest, therefore, justifying their hatred towards Immigration, as it encourages the disruption of social order and blurs national identity; and ‘Supranationalism’ (EU), as it undermines the authoritative position of our political institutions. This therefore could lead to inevitable conflict, as Conservative Nationalism fears foreigners, linking it to racism and inevitable cultural and moral rivalry. They are intolerant, in comparison to Liberal Nationalists, and focus, not on peace, but the promotion of social order within the nation. Similarly, Expansionist Nationalists ‘inevitably breed rivalry and conflict’, purely because they are extremely militaristic and aggressive; rejecting the idea of self-determination or all states having equal rights to self-determination, which is what the Liberal Nationalists support. Their idea is based upon inequality between nations, that some are automatically superior in comparison to others.

They can be described as ‘Chauvinistic’ due to their belief of dominance of certain nations over others, examples being in Russia, with the superiority of the slavs. They enjoy conflict and War as they thrive off their military achievements, which by extension to them, demonstrates a nations achievements. Expansionist Nationalists are viewed as ‘militaristic’, as they strongly follow the ‘for or against’ attitude; you either support or reject their ideas, therefore, inevitably breeding conflict between opposing beliefs. ‘Inevitable’ is an awkward word to describe conflict, simply because, it suggests that conflict is expected, however, looking further into the different branches of an ideologies beliefs’ it is clear that they have varied opinions about the on set of conflict.

Liberal Nationalists would not predict conflict, yet alone it being considered ‘inevitable’, as they support peace and international cooperation between nations. However, Conservative and Expansionist Nationalists would argue otherwise. They enjoy conflict and basking in their previous military successes. They support order amongst society and see inequality between nations as normal, therefore inevitably breeding rivalry between the opposing and weaker nations, trying to prove themselves otherwise. 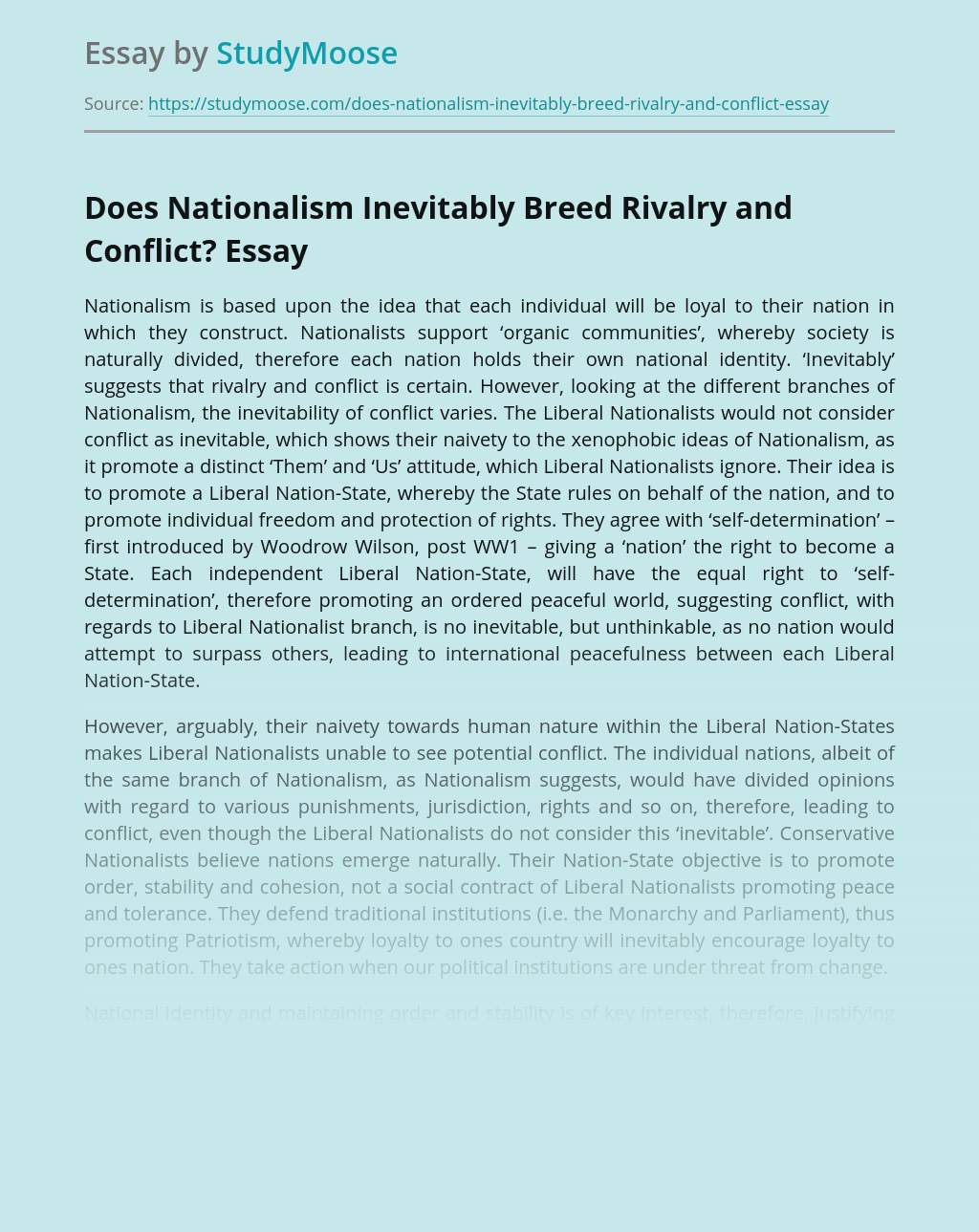