Ever felt targeted? Witness someone be judged by how they spoke? Felt as if no one belongs? Is it because they dress, act, or learn differently or a certain way? Most young adults go through these types of struggles. Stereotypes are preconceived labels subjected on the public. When teenagers do things out of the ordinary, dress differently, or hang out with specific people they tend to be measured up into or against these stereotypes. A common occurrence in high school, these stereotypes that try to define teenagers, can affect them either positively or work against us in negatively.

Don't use plagiarized sources. Get your custom essay on
“ Stereotypes – the Outsiders ”
Get custom paper
NEW! smart matching with writer

When people are labeled it is usually through a stereotype, they are judged on their appearance, attitude, personality, and friends along with many other superficial components. “Instead of being presented with stereotypes by age, sex, color, class, or religion, children must have the opportunity to learn that within each range, some people are loathsome and some are delightful.” (Manson) Characterization is a tool used to depict someone through the traits of their personality and association with those around them.

Of course, with the clash of characters and imposed stereotypes, conflict between people is almost certain. Rivalry, a byproduct of conflict and the law of survival is always at play within society. S.E. Hinton uses these literary techniques of stereotypes, characterization and conflict throughout the novel of The Outsiders to depict they key theme of rivalry. In The Outsiders, every character has been classified as “a greaser”, being stereotyped like that is pretty cruel.

When Ponyboy said, “We both need a haircut and some decent clothes. They’ll know we’re hoods the minute they see us!” (Hinton, 64) He admitted to succumbing to his stereotype.

Proving to the readers that the Greasers were based on their appearance. When people see them, they think that because they wear raggedy-down old clothing they are poor, not important, juvenile delinquents. Additionally, apart from being judged on their appearance, they are grouped together, all being seen as punks with no room for individuality. Ponyboy, Dally, and Johnny met two young Soc girls at the drive-in movie theater. Dally’s rude and unpleasant attitude gave the two girls a bad first impression of the Greasers as a whole. Later on, Ponyboy talked to Cherry, changing her perspective completely through the deep conversation he has with her, leaving her completely astounded at his intellectuality and at the discovery that the Greaser stereotype she had fitted him into was completely erroneous.

In the beginning, Ponyboy drops the story to spend a few pages feeding the readers with a brief summary on the characters mentioned throughout the book such as Sodapop, Darry, Steve, Two-Bit, Dally, and Johnny. Ponyboy tells the readers that the reason his group is called The Greasers is because of their long greasy looking hair. “My hair is longer than a lot of boys wear theirs, squared off in back and long at the front and sides, but I’m a greaser and most of my neighborhood rarely bothers to get a haircut. Besides, I look better with long hair.” (Hinton, 1) He informs the readers that the reason him and Sodapop have interesting names, is because it expresses the love their parents felt for them and it describes their personalities. He mentioned that Steve is smart and very cocky. Two-Bit never takes things seriously, always joking around, only goes to school for the kick of it not to go to learn or anything. Dally’s real name is Dallas, he mentions that he’s tougher, colder, and more mean than any other Greaser. Readers are left with the thought that Johnny is frightened, unloved, victimized, abused, and helpless.

When a car full of Socs pulls up, Pony and Johnny try to run away. Instead, those Socs pin them down. As Pony is about to drown in an ice-cold park fountain, Johnny stabs a Soc. The Soc who was handling pulls him out. Johnny tells Pony that he stabbed a Soc as Pony’s trying to recover his breath. Pony looks over to see a Soc on the ground and puddle of blood only to throw up. To avoid any more problems they leave and go to an old wooden church far from home. Spending five days there alone, they cut their hair to look different from the newspapers. Just as they were about to go home, the church catches fire. ”’I’ll get them don’t worry!’ I started at a dead run for the church, and the man caught my arm.

‘I’ll get them. You kids stay out!’” (Hinton, 91) Pony explains to the readers that several children are inside the burning church and there is not a whole lot of time to wait for the fire department to come and rescue them. Pony wakes up, in a hospital bed being reunited with his brothers. He is told that Dally is fine, but that Johnny is in critical condition and might die. When he gets out he’s told that there will be a rumble with the Greasers vs. the Socs. Being in good condition, Pony wants in on the fight. Dally is released just in time for the fight. After the rumble, Dally got the news that Johnny is dying. When he gets to the hospital to tell him the victory of the brawl, he is told that fighting doesn’t solve anything and see Johnny’s painful death. Dally being very upset pretends to be armed and goes to the police only to be shot to death, joining Johnny.

As demonstrated, conflict has arisen in this story as a cause of the two opposing forces of the Socs and Greasers. The stereotypes show the cause for misunderstanding and how stereotypes are never right and that a group of people can never are categorized as the same. True individuality shines through with the use of characterization, proving the stereotypes to be erroneous. The conflict in this story is the consequence, the price paid for the rivalry, which was cause of preconceived notions and ignorance. Stereotypes are revealed to be false, individuality is at last illustrated through the developing characterization throughout the story, and the final blow out is a representation of what ignorance, labels, and rivalry bring about. 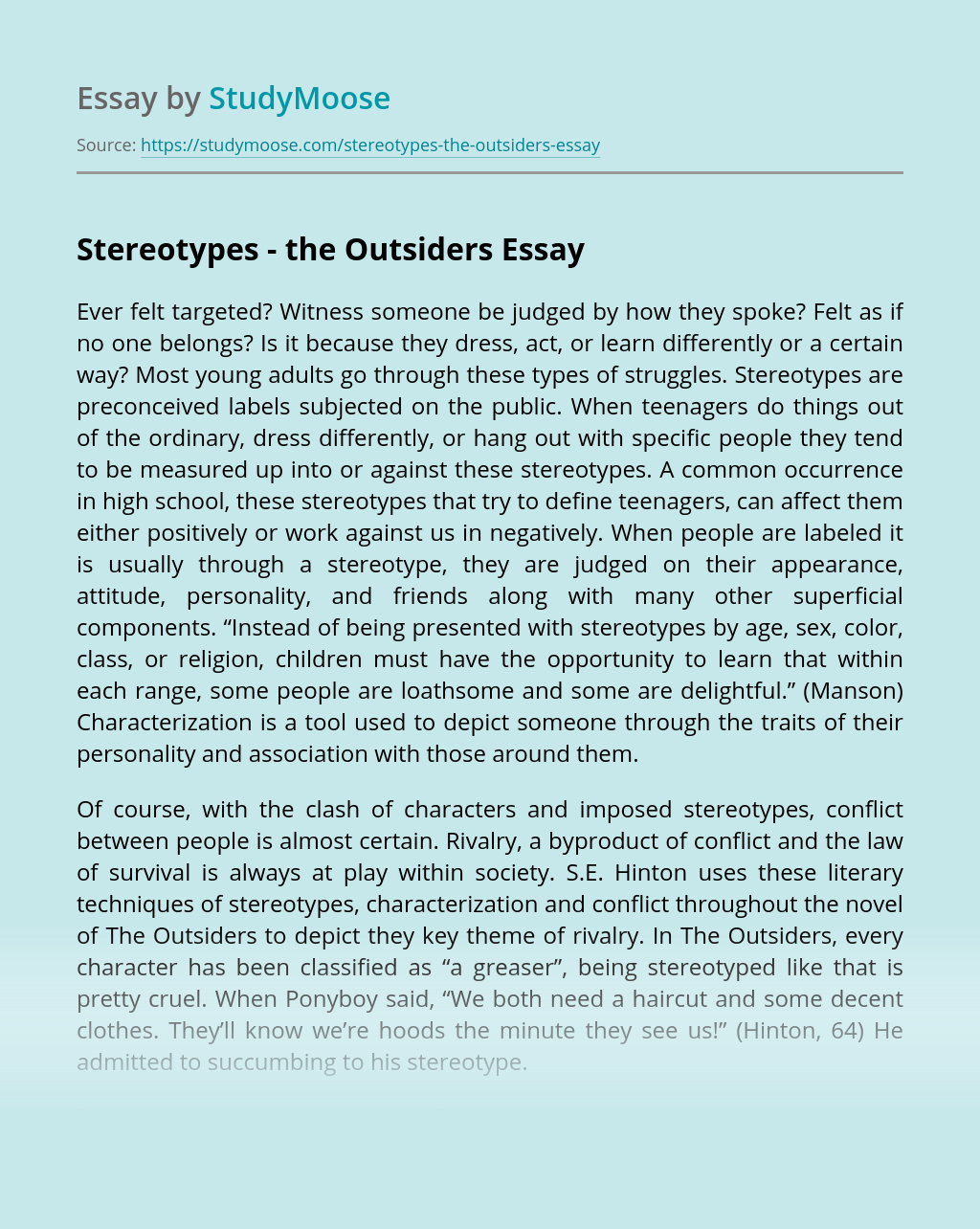