The Impossibility of the American Dream Essay

America has come to represent ideals such as wealth, happiness, and freedom. Immigrants travel to America in search of the American Dream, constructed of these hopes, although the majority of foreigners and natives alike never discover it. Various American novelists comprehend this unachievable desire and explore its depths in books that have now become classics. Among these novels are John Steinbeck’s _Of Mice and Men_ and the same author’s _The Grapes of Wrath._ In the first, two men with the names Lennie and George roam California in the 1930’s, hunting for ranches to work on.

Don't use plagiarized sources.
Get Your Custom Essay on The Impossibility of the American Dream Just from $13,9/Page

However, Lennie is mentally ill and always provokes trouble, driving the two companions to become fugitives until the next rural occupation. The American Dream motivates the two men; their version being a homestead with crops and rabbits, until George reluctantly shoots and kills Lennie. In the latter novel, the Joad family is forced off their land and into California in pursuit of work and ultimately their vision of settling down in a white house with oranges.

The family works efficiently and arduously, but remains in the miserable, poverty-stricken state in which they began. In his novels _Of Mice and Men_ and _The Grapes of Wrath_, John Steinbeck exposes the American Dream as unattainable through his settings, symbolization, and characters.

Steinbeck uses his settings to illuminate the unrealistic concept of the American Dream. Both novels occur in California in the 1930’s. More specifically, in _Of Mice and Men_, the story unfolds on a ranch, where every worker desires the American Dream, but none acquire it. For instance, Curley’s wife, who aspires to be a movie star, is murdered and Candy, who wishes to own a farm with Lennie and George, is condemned to remain at the ranch. The ranch is an accommodation for men, who have abandoned their dreams, to drudge through the week and then spend their pay on temporary pleasure. As George is exciting Lennie with their future home and land, George describes men who work on ranches. He announces, “They come to a ranch an’ work up a stake and then they go inta town and blow their stake, and the first thing you know they’re poundin’ their tail on some other ranch. They ain’t got nothing to look ahead to” (13-14). Despite the ranch’s employees’ daily labor, all they have to look forward to is the next week’s redundant momentary contentment.

The ranch represents these men and reflects the impossibility of the American Dream, since all of its inhabitants fail to capture it. In addition, the intricately detailed settings in _The Grapes of Wrath_ suggest the inaccessibility of the dream. For example, Steinbeck describes a roadside camp, “There was no order at the camp; little gray tents, shacks, cars were scattered about at random. The first house was nondescript. The south wall was made of three sheets of rusty corrugated iron, the east wall a square of moldy carpet tacked between two boards, the north wall a strip of roofing paper and a strip of tattered canvas, and the west wall six pieces of gunny sacking… and about the camp there hung a slovenly despair” (241). This precise portrayal provokes an understanding of the immense gap between reality and the American dream, since numerous people’s realities were dirty, uncomfortable camps such as the one depicted, not the comfortable lifestyle presented in the dream.

Moreover, Steinbeck uses symbolization to propose the American Dream is unreachable. Curley’s wife, in _Of Mice and Men_, finds Lennie alone in the barn one night and confesses to him her broken lifelong dream of becoming a movie star. She explains, “Well, a show came through, an’ I met one of the actors. He says I could go with that show. But my ol’ lady wouldn’t let me… If I’d went, I wouldn’t be livin’ like this, you bet” (88). Curley’s nameless wife is not a character, but the embodiment of the unattainable American Dream. She is an excellent example of the countless people who were forced to settle for less than the perfection of the dream. In _The Grapes of Wrath_, Rose of Sharon gives birth to a stillborn baby. When Ruthie asks her mother where the baby is, Ma replies, “‘They ain’t no baby. They never was no baby. We was wrong'”(446). The baby symbolizes the hope, happiness, and fresh start associated with the American Dream. Consequently, when the baby dies, all the ideals it suggests die with it, leaving the American Dream blatantly unattainable.

Furthermore, Steinbeck uses his characters to explore the dream’s inability to be obtained. George and Lennie, in _Of Mice and Men_, desire a house on a farm, but when Lennie kills Curley’s wife, George understands the dream has disappeared. He admits to Candy, “‘I think I knowed from the very first. I think I knowed we’d never do her. [Lennie] usta like to hear about it so much I got to thinking maybe we would” (94). Regardless of George and Lennie’s money and effort, the friends do not reach their goal. Likewise, the Joads, in _The Grapes of Wrath_, hope to find work and settle down in California.

Unfortunately, work is scarce and very few people are adequately prosperous to own land; the Joads face many hardships and difficulties. Steinbeck reveals the family as a flood invades their boxcar home and threatens to destroy the little property they own, “The family huddled on the platforms, silent and fretful. The water was six inches deep in the car before the flood spread evenly over the embankment and moved into the cotton field on the other side” (450). The family’s crushed dreams, for they are far away from a white house with oranges although they struggled to succeed, assert that the American Dream is unfeasible.

Even nowadays, people strive for goals that are ultimately unachievable. Society tells children that they can do anything or be whatever they want to be. Unfortunately, this is unrealistic. Not everyone can be a famous actor, talented singer, or professional athlete because all these careers take luck and skill as well as hard work. Aiming for unattainable goals only leaves the dreamer disappointed and dissatisfied and holds him or her back from obtaining more realistic dreams. In the novels _Of Mice and Men_ and _The Grapes of Wrath_, John Steinbeck realized the harm in constantly aiming for these unhealthy desires and exposed the impossibility of the American Dream.

The Impossibility of the American Dream. (2016, Jul 30). Retrieved from https://studymoose.com/the-impossibility-of-the-american-dream-essay 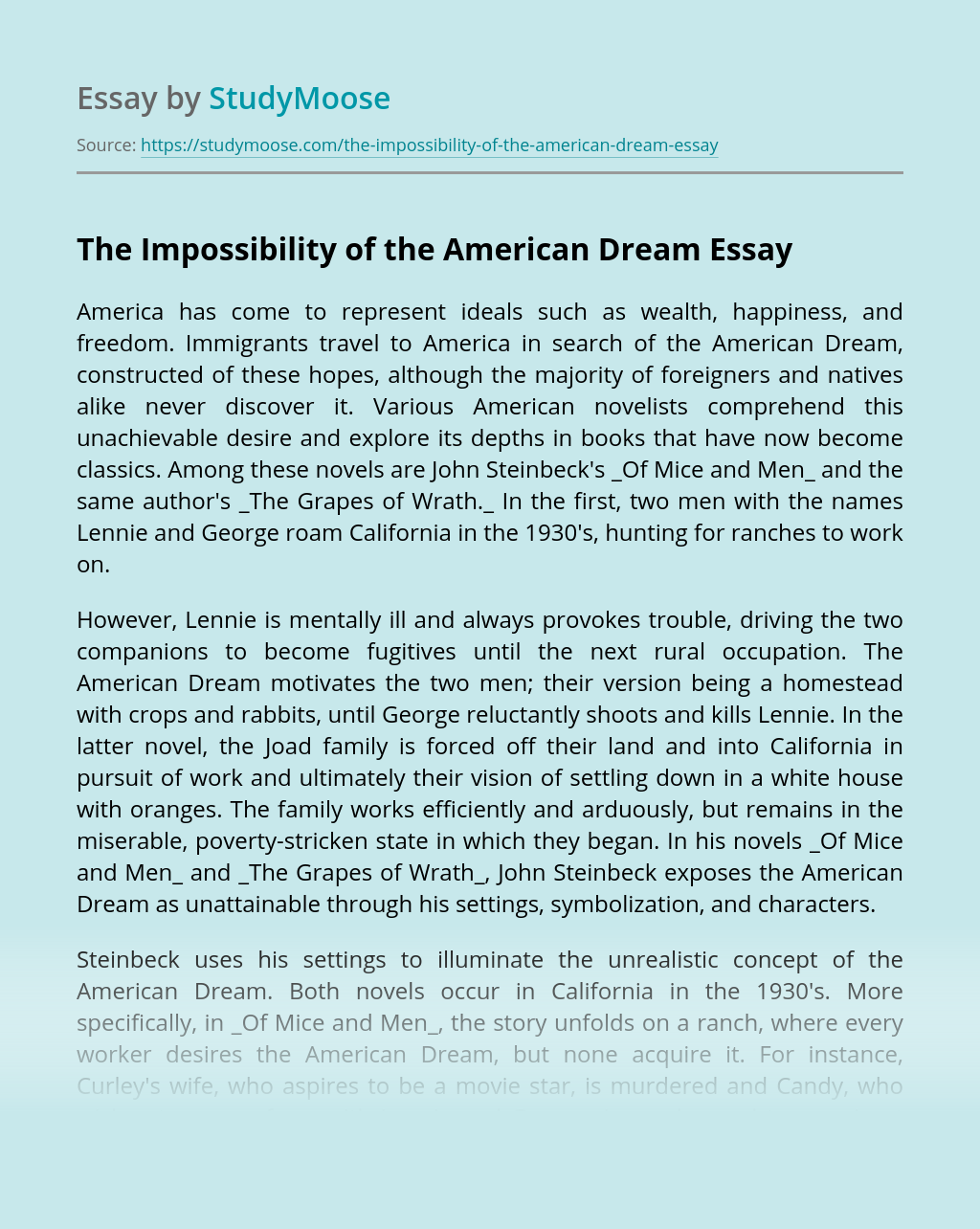 Playing games teaches us about life

People find themselves playing games throughout their entire lives. Games are essential to both children and adults since they teach people about life in a variety of ways. By playing games we can set our future dreams, reflect on our personal traits, and learn life-long morals. First, children can determine their future goals through playing... VIEW ESSAY

A school with creativity at the heart of the learning process will benefit by increasing the motivation of staff and pupils, says former head, Dave Weston. In this article and case study, he shows the way to more imaginative approaches to curriculum planning ‘Creativity is the defeat of habit by originality’ Arthur Koestler Many school... VIEW ESSAY

Classical literature; what is it really? The definition of ‘classic’ is “an author or literary work of the first rank, especially one of demonstrably enduring quality. ” So can this mean that any author who works their way up to the Best Seller’s List or is a Newbury medal winner is a classic? Classical literary... VIEW ESSAY

The memorandum from Salvador Monella to the Board of Directors addresses the rising costs of employee healthcare benefits at Penn-Mart. His communication includes an explanation of his purpose in addressing the healthcare costs, findings regarding Penn-Mart’s benefits costs, a recommended program to implement for cost reduction, and a discussion containing support for their recommendation. While... VIEW ESSAY