The American Dream is the term used for the dream that all American people share particularly during The Grate Depression. It could be argued that all the characters in the novel share this dream.

The American Dream was a dream that nearly everyone had throughout the twentieth century. It was hope for a better life and people believed strongly that it would come true. The main characters in ‘Of Mice & Men’ have a dream which was to get a plot of land and live on it and become self-sufficient.

Don't use plagiarized sources.
Get Your Custom Essay on How does Steinbeck present the American Dream in ‘Of Mice And Men’ Just from $13,9/Page

The American Dream was not an achievable goal for many people. Steinbeck shows this failure through the characters of Lennie & George.

We first heard about The American Dream when Lennie and George were sitting by the river at the beginning of the book. Their dream was one of independence. Workers like Lennie and George had no family, no home, and very little control over their lives. They had to do what the boss tells them and they had little to show for it.

They only own what they can carry. Therefore, this idea of having such power over their lives is a strong motivation.

The dream was a hope that every, rancher had an opportunity for a better life. Lennie and George, the two main characters, had such a dream, “Some day were gonna get a little place and a couple of acres”. The idea was to get a piece of land, grow crops and have an improved life there. They also new exactly what they were aiming for and what they wanted.

Because of the World Depression at the time this dream seemed non-realistic, as no one had any money and people were struggling to get jobs. They all thought the dream would provide them with a better life, more money and a sense as belonging. The dream gave them a feeling of happiness and hope. The dream was also used as a source of comfort, Lennie would craftily use the dream to comfort George when he was angered, and George would bribe Lennie with the dream ‘But you ain’t gonna get in to no trouble, because if you do, I wont let you tend the rabbits.’

Later on in the story Candy joins in with the dream, this makes the dream seem more realistic, instead of just fooling themselves. This gives candy freedom and hope because without a job he would have no future. Apart from that he has all the same reasons as George and Lennie to want a ranch, (hope, success, happiness etc).

Curly’s wife also tells us about her dream in the book. Her dream is different to the ranch workers; he dream is a typical woman’s dream to become famous in the movies. This was really all the women could do at the time, she was hoping for glamour and attention, to improve her status and have some independence. The reason for wanting the dream seems the same for everyone in the book even though they are different ‘types’ of people.

We know that the dream is not realistic because crooks tells us and we believe crooks because he’s intelligent. We know this because in the description of his room it is said that he has books on his shelves. Crooks also tells us about his dream in the story and it practically identical to the others dreams.

When Whit brings in the pulp magazine with the letter written by Bill Tenner, the men are all very impressed. They are not certain that Bill wrote the letter, but Whit is convinced he did, and tries to convince the others. In the transient life of these workers, it is rare to leave any kind of permanent mark on the world. In this letter Bill Tenner has achieved some of the immortality the other men cannot imagine for themselves. I think this upsets the workers a bit and makes them long for their dreams to come true even more

In the conclusion of the story everyone’s dreams have been shattered. The dream is ported as a brutal struggle. And in impossible goal to achieve, this is showed in all characters but most in the two characters Lennie and George.

How does Steinbeck present the American Dream in 'Of Mice And Men'. (2017, Oct 27). Retrieved from https://studymoose.com/how-does-steinbeck-present-the-american-dream-in-of-mice-and-men-essay 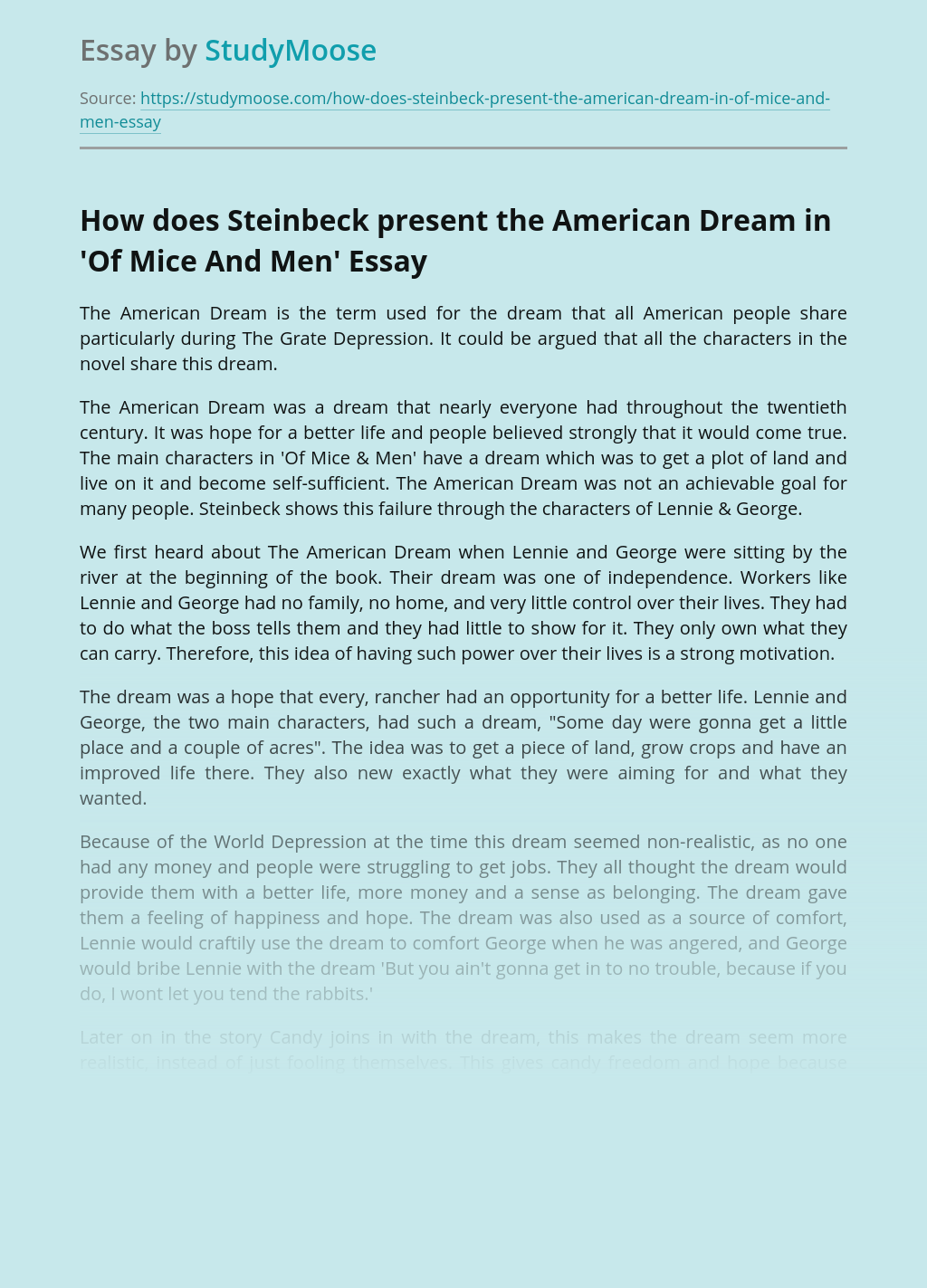 At the start of the 17th century King James 1 became king and he began to look toward the new world as a place were England could make a profitable settlement , as New Spain was for the Spaniards. This was the start of colonization in the new world for England. Following this, many colonies... VIEW ESSAY

Your name: Thineshraj Soosaiselvarajah Student No.: 120086194 UserID: [email protected] 1 The best way to predict the future is to invent it.  Alan Kay, 1971. Xerox PARC researchers maxim. Write your future history and/or make a list. (~250 words in all) Keep a copy for your future self. After graduating from Seneca, I would like... VIEW ESSAY

View sample
Get Essay
Cycling Is an Ideal Mode of Transport

With the improvement of living standard, the ownership of cars is increasing because of their convenience and rapid speed. However, some social experts consider that as a form of transport in urban areas, cycling is better than cars, which could combine the means of transport with public health. This essay will argue that cycling is... VIEW ESSAY

In today’s world, brain and nervous system problems are common. These neurological disorders include Parkinson’s disease, Alzheimer’s disease, multiple sclerosis, epilepsy, and stroke. These types of disorders can affect memory and ability to perform daily activities. In this paper, we will be taking a closer look into Parkinson’s disease (PD), a movement disorder that has... VIEW ESSAY

The house prices were on the rise and many traditional home owners attempted their dreams of becoming a real estate tycoon. Although some buyers might have lived through the recessions in the 70’s, they never experienced it as a consumer and so only seeing housing prices go higher and higher, the idea of owning a... VIEW ESSAY