American Dream In The Great Gatsby

What is the American dream? Is it white picket fences with beautiful green lawns and comfortably large brick houses? According to Dictionary.com the American dream is “the ideal that every US citizen should have an equal opportunity to achieve success and prosperity through hard work, determination, and initiative”. The American dream is a theme that is often used in American literature just like F. Scott Fitzgerald’s The Great Gatsby. This novel presents the American dream as an illusion that can never be achieved.

Don't use plagiarized sources. Get your custom essay on
“ American Dream In The Great Gatsby ”
Get custom paper
NEW! smart matching with writer

Gatsby in love with Daisy five years ago, got the disapproval stamp from Daisy’s parents since he didn’t have “pomp and circumstance”, unlike Tom Buchanan, who did (Fitzgerald 75).

As a result, Gatsby tries to fix himself by becoming a financially successful man in a bootlegging business.. Gatsby states that Daisy’s “voice is full of money”, because it reveals that Gatsby has hope to win back Daisy since her and Tom had married (120). The irony in this attribute of Daisy is that Gatsby can become successful and wealthy for her, but cannot have Daisy, his one love and desire. Daisy represents the American dream because there is an excitement in her voice that makes men come running.

This makes her desirable, much like the American dream. Also, when Jordan elaborates that Daisy never desired to attain love “yet there’s something in that voice of hers”, she shows how deceiving Daisy’s voice is, like when Jordan is suddenly distracted by Daisy’s voice (77).

This excitement and distraction, which is what Daisy provokes on Gatsby, is his clueless nature caused by the illusion of attaining Daisy, and thus fulfilling his American dream. When Daisy chooses Tom over Gatsby the American dream’s unattainability is shown. When Daisy confesses to Gatsby that she can’t say that she “never loved Tom”, it reveals how Gatsby is unable to truly understand how Daisy actually feels at all (133). Daisy is one way with Gatsby and another with Tom. She wants the best of both worlds, but is unable to achieve this due to her desires of prestige social status.

Gatsby plans for such a long period of time by buying a house in West Egg right across the bay from her, arranging their secret meeting at Nick’s house, and reinventing himself from James Gatz into the persona of Jay Gatsby. Gatsby nonetheless must give in to failure in his attempt to claim Daisy once again. Likewise, It is physically impossible for all of us to achieve the American dream. This is what Fitzgerald, is trying to relay when Daisy chooses Tom over Gatsby. Tom and Gatsby can’t both have Daisy.

American Dream In The Great Gatsby. (2016, Aug 19). Retrieved from https://studymoose.com/american-dream-in-the-great-gatsby-essay 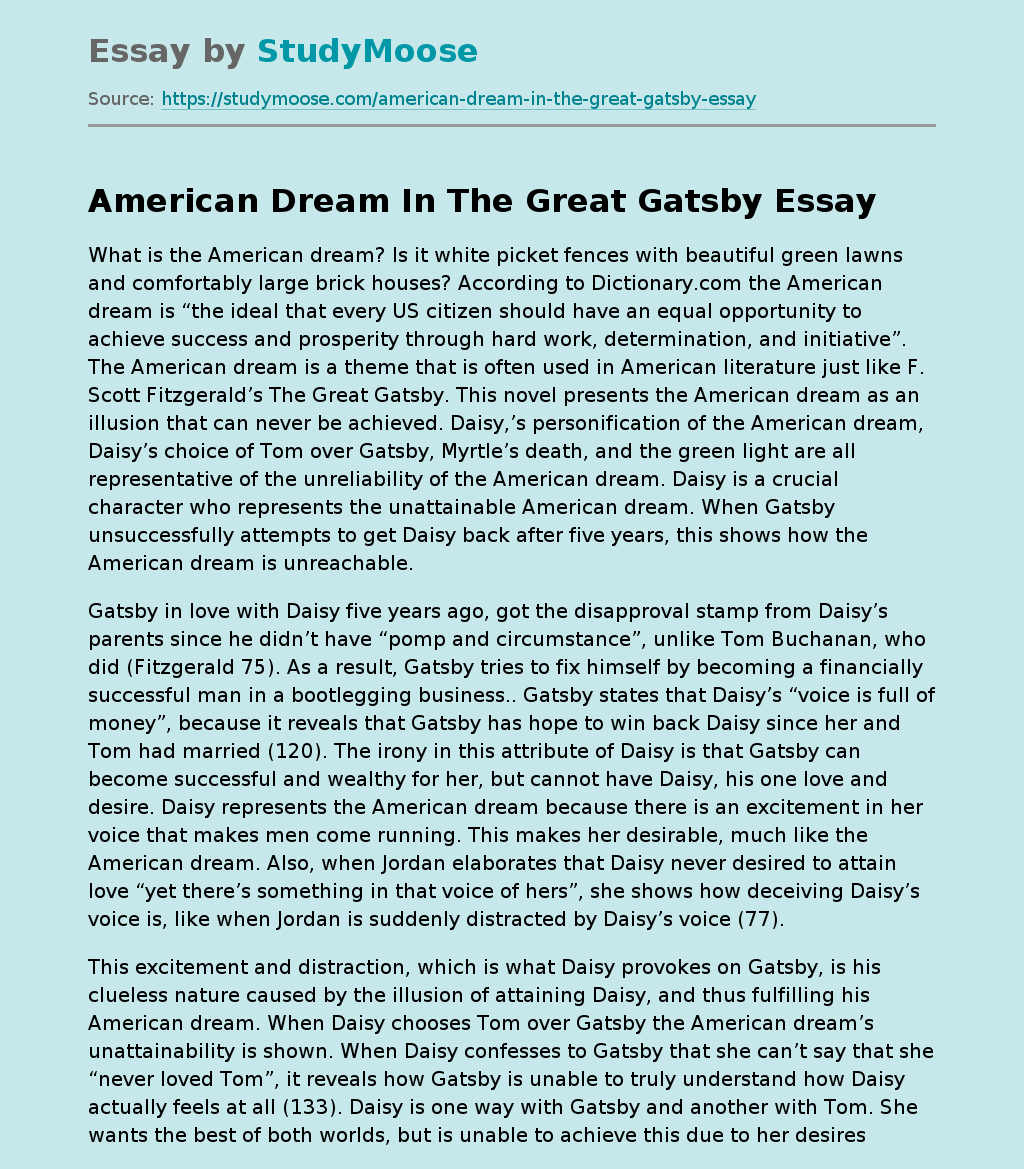