A Critique on Martin Luther King’s “I Have a Dream”

The task of this paper is two-fold; first, this paper will trace and explain the evolution of Martin Luther King, Jr. ’s belief that war, racism and economic injustice are all intertwined and can be dealt with the restructuring of society’s priorities and addressed the necessity of a revolution of values; second, this paper will also explain how he carried out his beliefs in the his speech at the Lincoln Memorial, “I Have a Dream”.

At the onset of this paper, it is important to note that King’s ‘background’ [which includes his race, habituation, education and religion among many others] is crucial in his struggle against racial discrimination, violence and economic injustice as experienced by blacks in the United States of America.

Turn in your highest-quality paper
Get a qualified writer to help you with
“ A Critique on Martin Luther King’s “I Have a Dream” ”
Get high-quality paper
NEW! AI matching with writer

This was clearly stated in the speech wherein hundreds of thousands of people were able to serve as audience.

In this speech, Dr. Martin Luther King, Jr. talks of manufactured and institutionalized oppression, I mean oppression which involves the mechanisms of law and power relations the basis of which is against the ‘natural law’.

The speech purpose is made evident here as its intention was made clear: that racism should be abolished. Furthermore, Luther King’s striking delivery made it more of just an expression of freedom but of a struggle against an intangible foe: his fellow American’s mentality. Natural law theorists, following the thoughts of St.

Augustine that “an unjust law is not a law at all” and Aquinas’ notion of “law as an ordinance of reason”, view morality as essentially tied up with the very essence of law.

How does King figure in all of this? How can we explain the evolution of King’s ideological perspective? The point is clear: Oppression and unfair treatment of individuals is not morally valid nor is it morally permissible most especially if the basis of such is the individual’s ethnicity or race.

As the Kantians believed, each person has a capacity for rational deliberation and choice and as such, an autonomous being with dignity and therefore, ought to be respected by virtue of being human persons. The evolution of King’s ideological perspective may therefore be construed in such way that it is a product, both of his experiences as a black living in a white-dominated society and his philosophical and political development and this may be inferred from Fairclough’s book, “Martin Luther King, Jr. ”, 1995.

King’s speeches very clearly communicate his views: “I believe that unarmed truth and unconditional love will have the final word in reality…. I have the audacity to believe that peoples everywhere can have three meals a day for their bodies, education and culture for their minds, and dignity, equality, and freedom for their spirits[…] (as cited by Carson, 1998). Three important points about King and his political thrusts, philosophical orientation and as to why he may be called a “radical democrat” may be inferred from the aforementioned quotation in his speech.

First, as a leading figure in “civil rights movement” King believed in the tenets of democracy and liberalism in the sense that he believed that both white and black Americans must have fair treatment in the realm of the law, for the purpose of law itself is the administration of social justice. Second, he believed in the “non-necessity of violence”. Influenced by Mahatma Gandhi’s “civil disobedience”, he believed that there are peaceful ways in and through which the problem of political and economic injustice may be resolved.

It may further be inferred that for him, political, economic and social change can best be achieved not through violence [and that the government should not keep itself busy from going to war, as in the case of the Vietnam War] nor by transforming a portion or a sector of society but what is needed is a restructuring of the society as a whole. King believed that a “revolution of values” is a matter of strict necessity. King’s views may be identified as “radical” in this sense.

He emphasized the need to restructure even how we think about black Americans or African Americans. It may be inferred that racism, the feeling of being superior over another race or ethnic group or nationality is grounded on the wrong premises; wrong modes of thinking and reasoning. It is by transforming our psyche and by appealing through reason and conscience that society as a whole may chart its rightful path towards genuine social change.

Third, he believed and fought not only for civil rights but also for economic changes especially labor rights and lobbied for law reforms to be enacted to protect Negroes from exploitation and oppressive schemes adopted by employers. These include fair treatment and equal work opportunity, just compensation, etc. This is how he carried out his beliefs in the Memphis Strike and the Poor People’s Campaign. King served as a voice crying for the emancipation not only of black Americans but also of other human beings from the chains of oppression.

Based on the above discussion, we can see why King believed that the problems and conflicts brought about by war, racism and economic injustice are all intertwined. What we can infer from his views is the interweaving and interconnecting patterns brought about by racism itself. Furthermore, the speech was made memorable as it was delivered at the Lincoln Memorial. Abraham Lincoln was the first to abolish the slave trade in the southern states during his term which was considered as a significant step towards racial equality in the United States.

But racism is not in itself the root of the problem; it is merely an effect of a traceable cause. This cause, this root of racism, is none other than a distorted value system, a wrong frame of mind resulting to feelings of superiority and even contempt and hate which further results to taking an unfair advantage of other human beings, plus a very materialistic market essentially driven by capital.

The fault is, at bottom, deeply embedded with the minds of persons and a wrong value system, a wrong sense of pride and nationality, for it fails, in the Kantian sense, to respect persons for the sake of being human persons, not as mere means and tools that another person or race may use but as ends-in-themselves, possessing the capacity for rational thought, capable of making rational choices and thereby, beings that are autonomous and dignified and for the aforementioned reasons, deserve to be respected.

A Critique on Martin Luther King’s “I Have a Dream”. (2016, Sep 04). Retrieved from https://studymoose.com/a-critique-on-martin-luther-kings-i-have-a-dream-essay 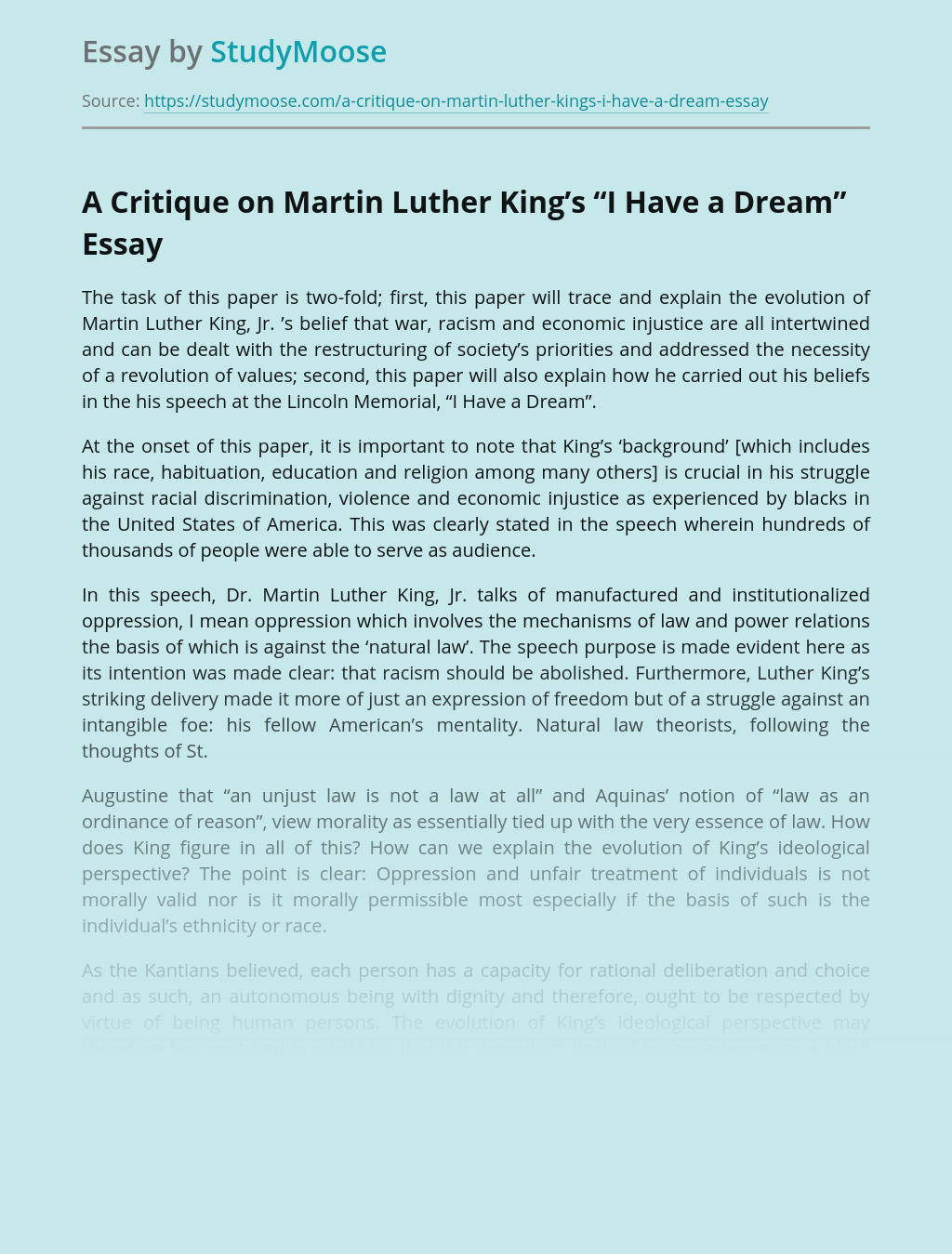 Turn in your highest-quality paper
Get a qualified writer to help you with
“ A Critique on Martin Luther King’s “I Have a Dream” ”
Get high-quality paper
Helping students since 2015
Stay Safe, Stay Original