Be The American Dream is something that can be easily defined for some people, and for others it can be very difficult to put into words. The American Dream is a combination of a few things. I firmly believe that Americans should have equal access to this ideal of an American Dream in order for it not to be considered just mere notion. My idea of the American Dream is also built on freedom. Our fore fathers who built this great nation were on the right track when they wrote our nations Constitution and amendments.

Don't use plagiarized sources. Get your custom essay on
“ American Dream or American Nightmare ”
Get custom paper
NEW! smart matching with writer

To motivate the people the men who fathered these documents wrote grand statements that promised all men life, liberty, and the pursuit of happiness, the right to bear arms, and my favorite statement is that all men are created equal. With these ideal in mind our great nation was forged. Look just a little bit closer at the Constitution and amendments and discover that the Constitution and amendments that this country was built upon was produced and approved by a panel of all White men.

At the time there was not one person of color nor a woman’s signature of approval or voice involved in its creation.

In other words it was not written to protect women or people of color. In those days women had no voice and African American slaves were considered to be property and only partial human. Therefore, was the American Dream ever meant to be used by me? My American Dream can be best summed up by Dr.

Martin Luther King Jr. in his I Have a Dream Speech, King (1963) stated: In a sense we have come to our Nation’s Capital to cash a check. When the architects of our great republic wrote the magnificent words of the Constitution and the Declaration of Independence, they were signing a promissory note to which every American was to fall heir.

This note was a promise that all men, yes, black men as well as white men, would be guaranteed to the inalienable rights of life liberty and the pursuit of happiness. (King, 1963) Racism still exists today in our great nation. The American Dream is centered on the foundation of equality, without equality the American Dream quickly turns to an American Nightmare giving hopelessness to unfortunate people born the wrong color. Imagine going to a good college where you excelled in academics and graduated at the top of your class only to be passed over for a job that you applied for.

To add insult to injury the Caucasian that got the job instead of you had no college education at all nor was he more qualified than you. That is the world that we live in where it is not what you know but what color you are. My experience pursuing the American dream has been quite an amazing journey. As a child my mother promoted how important it is for my siblings and me to become doctors and lawyers. I often wondered why she insisted that her children pursue such demanding and powerful careers. I no longer wonder why she did so my mother simply wanted her kids to be doctors and lawyers because we could be.

In my mother’s time there was this little word called segregation that made equality almost impossible. My mother grew up in Alabama in the 1950s where separate but equal was the norm. Separate but equal was far from equal, my mother had no choice but to attend the poorest schools for the absolute cheapest education that was available. Since my mother was at a great disadvantage during her pursuit of the American dream she figured we had a better chance of being successful in equaling the playing field by becoming doctors or lawyers. Sadie Woodfin’s American dream was for my siblings and me to have an equal chance in America.

She was not insisting that we all become doctors and lawyers or she was not going to be proud of us. She wanted us to realize that we could shoot for the stars, to take full advantage of the freedom that was not allotted to her generation. Since my mother had no formal education or degrees she, was forced to work in industrial steel mills where she developed black lung. Her American dream was believed to be all but lost until it was reborn in us. My vision of the American dream consists of not only equal opportunities in education but also income equality.

Even in 2013 women of all color African Americans and Latin Americans are paid significantly less for the same job as their White male counterparts. According to, the National Partnership for Women and Families full-time working women alone are paid an average of 10,622 less than men. With their income inequality gaps in excess of over 10,000 just for a difference in gender. Kind of makes the American dream seem like an American nightmare. This practice in America of unequally compensating anyone solely based on their age, race, religion or sex is not only wrong it is total unfair practice.

Is the American dream more so suited for a man than a woman? Does the American dream favor a white man over a black man? If income inequality affects one of us it should affect all of us. I am almost certain that no one wants to go to the same schools, go through the same struggles, make the same sacrifices and ultimately have the same qualifications only to be paid far less. This ideal is not even remotely appealing to the lowest of idiots. Statistically speaking being a minority or a woman the odds are already stacked against you in the pursuit of the American dream and income equality.

The American dream is still alive and well in this country today. It just needs to be tweaked a little. For starters women should be equally compensated as men for the same job. Second, Latin Americans and African Americans must have access to the same schools, neighborhoods, and programs that their Caucasian peers have access to. If collectively we as a society want this American dream to be fair and applied to all Americans we have to even the playing field. Our very own government even recognizes that there is a problem so they had to implement strategies and programs geared toward equality, such as affirmative action.

If the American dream was already achievable for all citizens we would have no need for such programs. If we take time to analyze the American dream and ask simple questions such as, when and who set the original guidelines for the American dream it would not surprise you regarding why things are the way they are. The American dream was born from this nation fore fathers who were successful, powerful and influential white men. At the time the Constitution was written there were no women, African Americans, or Latin American signatures nowhere to be found on any documents or amendments pertaining to the direction our great country were headed.

The fact still remains we are not all created equal, some of us are born women, black or brown. Because of our unfortunate birth your color or sex may make achieving the American dream not impossible in 2013 it just makes it a little more difficult. As a child my version of the American dream was not my own it was my mother’s vision to be equal to all my peers. As a father my American dream is just as my mother’s, I want my three daughters to attend the best schools in hopes that they will pursue careers that they will not only enjoy but also be treated, respected and compensated the same as any American citizen should expect.

If we as a country openly advertise that we adopt all religions sexes, and races as equals under the veil of the United States and its Constitution then all of us must have an equal opportunity at the pursuit of the American dream. Until barriers such as color, sex, and religious preference are broken women, Blacks and Browns still have an unfair disadvantage in obtaining the so called American dream. 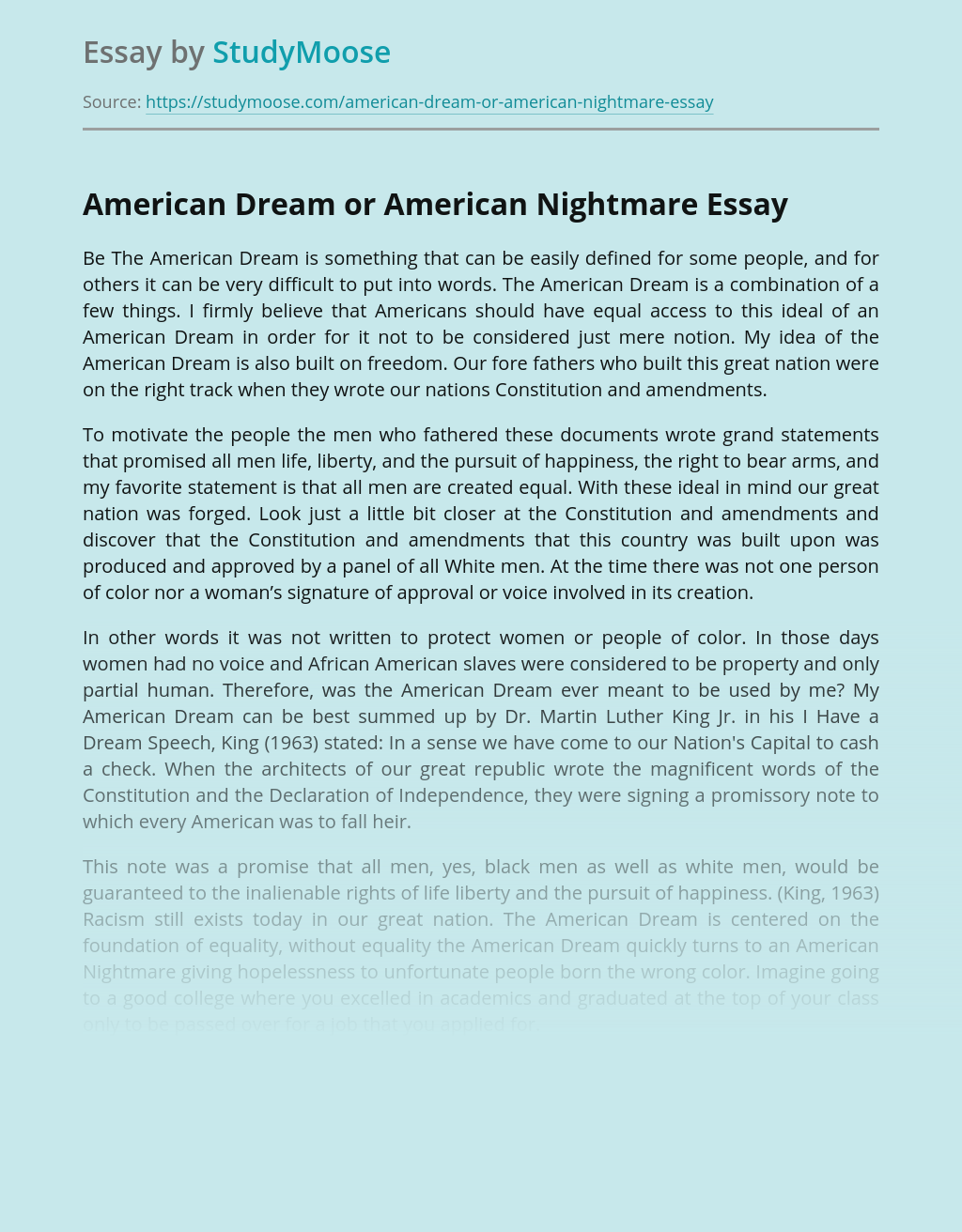