The setting for a horror film is usually shot in isolated, abandoned locations for example at a haunted basement, attic or loft. This is because these settings create a sense of tension and an eerie atmosphere to the audience. The more dramatic and action packed scenes are usually shot in the night because people are more vulnerable at this time and is where more “scary” events are expected to happen, however footage can be taken anytime during the day. Examples of locations are: Graveyard, Churches, Hospitals, Basements, Attics and Lofts.

Don't use plagiarized sources. Get your custom essay on
“ Media – Genre Conventions of a Horror Film ”
Get custom paper
NEW! smart matching with writer

Horror films are used to create a negative emotional reaction from viewers by playing on the audience’s primal fears.

Horror films often feature scenes that startle the viewer. Themes like the supernatural, good vs evil and death are commonly used in this genre. Horror films often deal with the viewer’s nightmares, hidden fears, and terror of the unknown. Plots within the horror genre often involve the intrusion of an evil force, event, or person, commonly of supernatural origin, into the everyday world.

The presence of characters like children are used because they come across as innocent to the viewer, when in the fact they hold a hidden agenda and so surprises the audience when they see the child possessed by an evil spirit. Other characters include ghosts, aliens, vampires, werewolves, curses, satanism, demons, gore, torture, vicious animals, monsters, zombies, cannibals, and serial killers. The hero (protagonist) is usually seen as the victim, the villain (antagonist) is usually of supernatural origin that scares the audience.

The narrative structure of horror films is commonly using Todorovs theory – Equilibrium, Disruption, Resolution and new equilibrium. This is used, so the beginning of the film explains who most of the characters are and gives the audience the chance to guess who the protagonist and antagonist are of the film before the action begins. Although the characters are usually faced with an obstacle that they have to overcome either alone or as a group. As the characters are in the process of resolving their problems it usually ends with a twist, and surprises the audience with the fact that the antagonist wasn’t who they anticipated it to be.

The technical features of horror movies are high/low camera angles for effect and to show power of the characters, jump cuts to show quickening of time, diegetic sounds for realism, non-diegetic sounds for example monster sounds to scare the audience and low-key lighting to emphasize a shadow effect. The technique iconography is used in horror movies for example weapons (guns and knives) , blood to show a death or someone injured, religious symbols to emphasize religious backgrounds for instance satanic beliefs or Christianity, dark coloured clothing and costumes as well as dark and dominant make up for the antagonist character to emphasize a frightening image.

The horror film style has changed over time, but in 1996 Scream set off a “chain of copycats”, leading to a new variety of teenage, horror movies. This new approach to horror films began to gradually earn more and more income as seen in the progress of Scream movies. The importance that horror films have gained in the public and producers’ eyes is one obvious effect on our society. Horror films’ income expansion is only the first sign of the influences of horror flicks. The role of women and how women see themselves in the movie industry has been altered by the horror genre. In early times, horror films such as My Bloody Valentine (1981), Halloween (1978), and Friday the 13th (1980) pertained mostly to a male audience. Their main focus was to express the fear of women and show them as monsters; however, this ideal is no longer prevalent in horror films.

Women have become not only the main audience and fans of horror films but also the main protagonists of contemporary horror films. The horror industry is producing more and more movies with the main protagonist being a female and having to evolve into a stronger person in order to overcome difficult obstacles. This main theme has drawn a larger audience of women movie-goers to the theaters in modern times than ever historically recorded. Movie makers also go as far as to integrate women relatable topics such as pregnancy, motherhood and babysitting jobs into their films in order to gain even more female oriented audiences 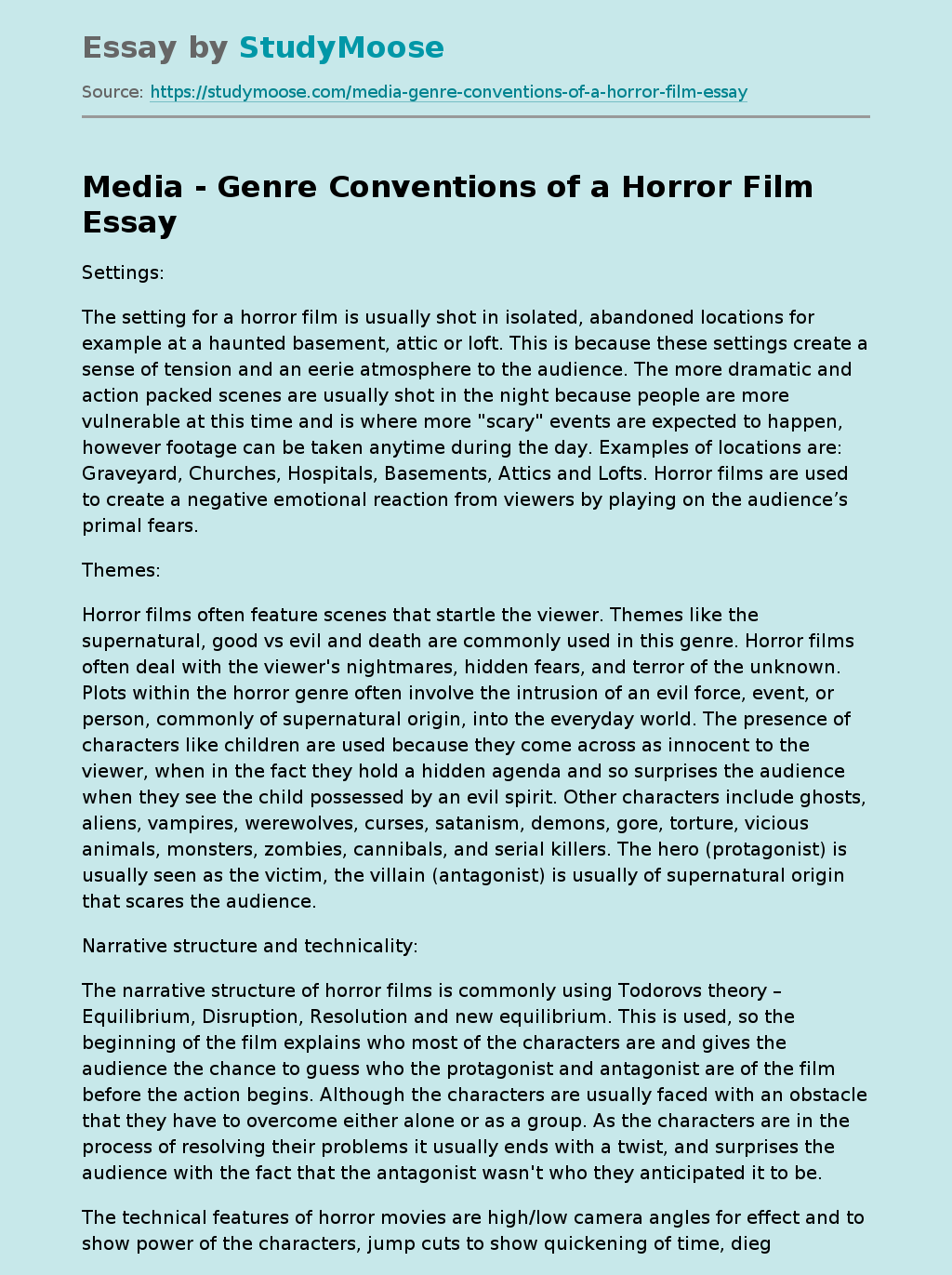