To What Extent is Cat On A Hot Tin Roof a representative of the Shortcomings of the American Dream?

Part of the basis of the American Dream, is set on the idea that it didn’t matter where you came from, a man could make his own money and therefore be only reliant on himself. Big Daddy is a good representation of the man who created his big empire, and for that reason he was very proud of himself, ” I made this place! I was the overseer on it… I quit school at ten years old and went to work like a nigger in the fields!”

The American Dream was mainly focused at the WASP’s, the White, and Anglo-Saxon Protestants.

Don't use plagiarized sources. Get your custom essay on
“ To What Extent is Cat On A Hot Tin Roof a representative of the Shortcomings of the American Dream? ”
Get custom paper
NEW! smart matching with writer

In Cat on A Hot Tin Roof, the family all fit those criteria. The only Black people in the play are the servants, Lacey and Sookey, they do not feature much in the play.

America is known for being the Land of Opportunity, and Big Daddy explains this to us when talking to his son, Brick, in Act two, of Cat on a Hot Tin Roof.

We learn that in the “country of Spain…the children [are] running over those bare hill in their bare skins beggin’ like starvin’ dogs”. Big Daddy says he himself “could feed that country” he has “money enough to feed that goddam country”. He furthermore explains, “in Morocco…prostitution begins at four or five”. Yet, as he explains to Brick, ” I’m a mighty rich man” but ” a man can’t buy his life with [money]”.

He tried to convince himself that money is so important, and to him, it is.

He has achieved the American Dream, and now has enough money to keep his wife and children financially secure after his death. What he realises in Cat on a Hot Tin Roof, is that the American Dream is the ability to make the money for yourself, by yourself, but once he has this great symbol of success, it is worth nothing. This is the shortcoming of the American Dream.

In Arthur Miller’s Death of a Salesman, we see Willy Loman at the end of his working life. He has been working his entire life to achieve the American Dream, yet the first words we hear from him, are not of success and fulfilment, but of fatigue, ” I’m tired to death”. We understand, still, at the age of “sixty”, Willy is still trying to reach the American Dream. Arthur Miller shows a better representation of the shortcomings of the American Dream that Tennessee Williams. Death of a Salesman shows us that what you sell is what you earn, no matter how many hours you do your work for, nor how hard you work.

Tennessee Williams plays, unlike Arthur Miller’s, are set in the Deep Southern States of America, and consequently, the idea of the American Dream is very different. In Cat on a Hot Tin Roof Big Daddy has reached the Southern American Dream, he has built his empire by creating his plantation, and he “did all that [himself]”. However, in the North of America, one couldn’t achieve in the business world without tackling the industrial world. Being successful meant conquering industry; you dealt with machines, whereas in the Southern States, you dealt with people.

By dealing with people, in the South of America you had to be physically beautiful, which then brought about popularity and success. In Cat on a Hot Tin Roof, Brick and his wife, Margaret, are both beautiful people, Margaret says she thinks Big Daddy even ” takes in [her] shape”. Brick is “the only drinkin’ man…that it never seems t’put fat on.” The couple are only unable to lead their perfect lifestyle due to the fact that Margaret is childless. This is a problem for her as it shows her to have failed as a woman. As Brick’s sister-in-law says the reason for this is “that big athletic husband of hers won’t go to bed with her!”

This is an example, shown in Cat on a Hot Tin Roof of how the family, although they seem to be the perfect example of a family that has reached the American Dream, may be perfect on the exterior, but far from it beneath that. This is because, whilst Margaret and Brick are both very good looking and come from a wealthy family, and they therefore appear to have everything they need and want, Brick has taken up “the occupation of drinkin'” and Margaret is “childless”. She has no children as Brick “won’t go to bed with her!” It shows a good representation of the shortcomings of the American Dream, as there is a family, who appear to have everything, yet in essence, have nothing of worth.

We are able to see in Cat on a Hot Tin Roof, a good example of how somewhere, on the path to their personal success, each character has lost something vital to them, in order to reach the American Dream. Big Daddy, although he has “twenty-eight thousand acres of the richest land this side of the valley Nile” is a dying man who admits to Brick, that his wife “makes me sick”. This is the sacrifice he made on the way to success, in order to earn money and build his empire; he gave up on his family life.

Brick, the “beautiful athlete” has a “childless” wife and a drinking problem, he too gave up, yet much earlier than his father. Brick’s brother, Gooper, although he has “five [children] already and were turning out number six” is not loved by his family, nor does he love them. Much like in Death of a Salesman, where Willy wants the wealth of the “jungle”, but the comfort of his family, yet cannot achieve this.

Amidst of the “richest land [that] side of the valley Nile” are Brick and his wife Margaret the “cat”. The latter can be seen as a clear example of what the American Dream needs to succeed. A woman never one to succumb to “the charm of the defeated” she will “never give up” and is “determined to win”.

Margaret is ambitious; has taken “a giant step up on the social ladder” through marrying Brick, as she recalls her own poverty and is determined that she and Brick will not lose out on what should be theirs of Big Daddy’s estate, she says, “you can be young without money, but you can’t be old without it.”

She is a good representation of the willingness to strive for the dream, Margaret knows what is important, and she is worried of her “childless” marriage, aims to become wealthy and always tries to appear respectable. Yet the shortcomings are shown in her husband, who will prevent her form achieving her goal.

Brick rejects the dream; he has a great “estate” within his reach but, as opposed to reaching out for it, he pushes it away. He is an alcoholic, who has retired to a “remote” and “detached” drinking world. Similarly to Biff in Death of A Salesman, Brick wanted the American dream as he remembers it as a young boy, playing football: not the reality he is faced with.

Big Daddy would like, as he says to Brick, to “give you this place”, to turn Brick into who Big Daddy was when he was younger. Likewise, in Death of A Salesman, the central conflict is Willy’s need to make Biff a success in Capitalist terms.

Although in Arthur Miller’s work there is a clear representation of the shortcomings in a man’s quest to achieve the American Dream, Cat on a Hot Tin Roof, shows the shortcomings can affect a man who does in fact achieve his goal, and has created his empire.

To What Extent is Cat On A Hot Tin Roof a representative of the Shortcomings of the American Dream?. (2017, Oct 27). Retrieved from https://studymoose.com/to-what-extent-is-cat-on-a-hot-tin-roof-a-representative-of-the-shortcomings-of-the-american-dream-essay 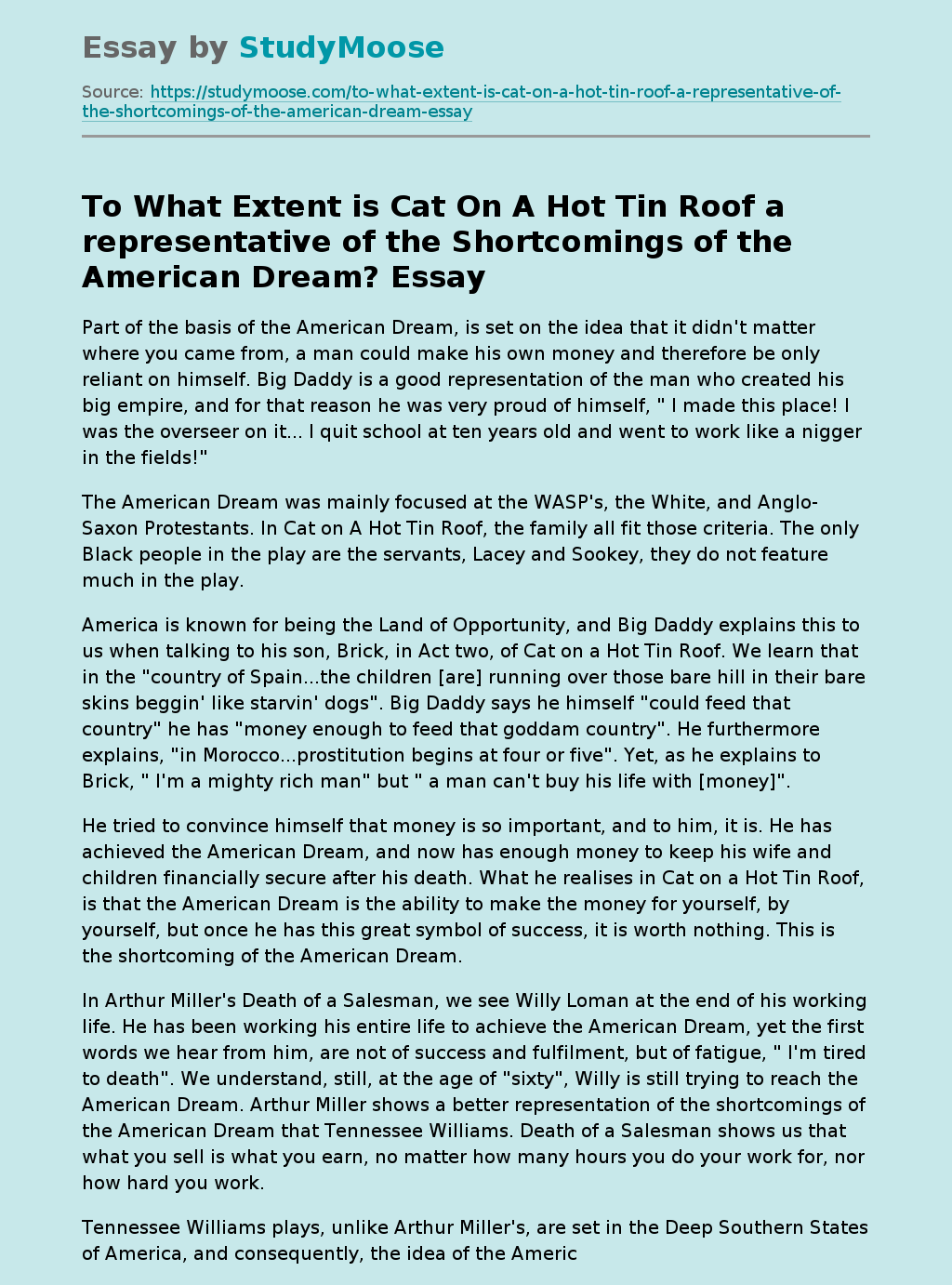