Discuss Williams’ treatment of mendacity in Act I and Act II “Mendacity is the system in which men live” – Brick to Big Daddy Mendacity is a key theme in the play “Cat on a Hot Tin Roof” and the lies that the characters in the play keep from each other is a technique Williams uses to create suspense and scandal. The secrets that eventually surface are what Williams dubs the “inadmissible things” that are repressed at all costs. The two main subjects of repression are Bricks concealed homosexuality and Big Daddy’s imminent death, which the family are all aware of except Big Daddy himself, and Big Mama.

Don't use plagiarized sources. Get your custom essay on
“ Discuss the Use of Mendacity in Cat on a Hot Tin Roof ”
Get custom paper
NEW! smart matching with writer

Big Mama desperately invests all her future hopes in the dream of Brick becoming a family man after the men are forced to confront these secrets. She is under the false belief that the responsibility of fatherhood will put an end to his alcoholism, and that their estate could go to the rightful heir.

Big Mama believes that the preservation of the family line runs through Brick, and he will represent Daddy’s immortality.

The idyllic fantasy of Brick and Maggie’s “family”, however, is yet another of the play’s lies. The relationship between Brick and Maggie in “Cat on a hot tin roof” represents repression of both the truth and sexual desires. Maggie continuously refers to herself as a “cat” which is a method used by Williams to represent how through how her husband’s neglect she has been forced into a constant state of anxiety and bitterness and is frantically desiring Bricks affection.

Brick is cold towards Maggie from the beginning of the play which insinuates that perhaps an incident had happened previously in their marriage that caused Maggie to become frantic and Brick to resort to liquor in an attempt to “put up a screen himself and the real world” namely his relationship with his wife. Maggie possesses a constant burning desire to have a child with Brick, not only because she loves him, but as she believes it will help them gain a larger share of Big Daddy’s fortune when he dies from cancer.

As Maggie is fully aware of the fact that Big Daddy’s death is imminent she resorts to bringing up the subject of Brick’s late friend Skipper in an attempt to relate with the cold, emotionless Brick; something we learn Brick made her promise not to do on the grounds that they’ll stay together. The mendacity in Brick and Maggie’s marriage begins to surface at the end of Act I when Maggie suggest that the feelings that Skipper had for Brick weren’t “pure” and implies that Skipper had homosexual desires for Brick. Brick becomes angered by the fact that Maggie was insinuating that Skipper was gay, he tells her she’s naming their friendship “dirty” to which she exclaims “I’m naming it so damn clean that it killed Skipper!”. Williams uses Skipper’s suicide to create a reason for Brick to turn to alcohol. In Act II Brick reveals to Big Daddy that mendacity is the reason that he drinks, and he drinks to escape reality and so things, in his own head, become “peaceful”.

Williams uses the unrequited love felt for Brick by many of the characters to create a sense of responsibility to which Brick is in no fit state to live up too. This is physically represented by the way Brick repeatedly tries to flee from having an important conversation with Big Daddy in Act II. Both the characters of Big Daddy and Brick display disgust with mendacity. Big Daddy represents this with his outbursts at his own family such as when he confronts Mae for eavesdropping and says “I can’t stand sneakin’ and spyin’ in makes me puke…” Big Daddy also reveals to Brick at how he can’t stand Big Mamma, and continuously refers to her as “fat an’ ugly” and confessing how he “never should have wasted so much time with her”. Big Daddy and Brick are both hypocritical in the sense that they openly share their hatred of the mendacity that surrounds them, when in fact it is the lies and secrets they keep to themselves that they kept from each other that are the true causes for their unhappiness. Big Daddy confronts this issue when he suggests Brick take responsibility for Skippers death , he tells Brick; “You been passing the buck.

This disgust with mendacity is disgust with yourself. You!—you dug the grave of your friend and kicked him in it!—before you’d face the truth with him!” Daddy delivers his ultimate diagnosis of Brick toward the end of Act II. Brick is disgusted with his own mendacity before the homosexual desire in his friendship with Skipper. He metaphorically dug his friend’s grave for him rather than face the truth that they possibly shared more than a close friendship. Thus Daddy calls his son to judgment: “You!” he cries accusingly. While Daddy’s diagnosis rings true, it is suspiciously familiar. Indeed, it repeats Daddy’s own remark to himself in Act II, in which he exclaims in disgust over the mendacity in his staying with Big Mama for forty years. Brick himself has echoed Daddy’s outburst on mendacity as a feint, as another way of “passing the buck”. Daddy has interpreted its hidden truth. It also seems, however, that he has perhaps projected his own disgust with mendacity onto Brick, highlighting the narcissistic nature of the relationship they share. Williams created the relationship between Brick and Big Daddy to represent a degree of honesty in a play that is saturated in lies and secrets.

Although they are not entirely open with each other, they share a mutual respect which means they are truthful and Williams uses them to bring to the surface Big Daddy’s true opinions on his family and their attitudes towards him, and the inheritance they so desperately desire. Another technique Williams uses to highlight mendacity in the family is through the way the characters of Mae and Gooper are portrayed. Supposedly the example of an ideal family with five “no-neck monsters” they call children, Mae, Gooper and their children appear grotesque and irritating to both the audience and Big Daddy. They personify the human nature of greed and are known to be manipulative by constantly “sneakin’ and spyin’” on Brick and Maggie and reporting to Big Mamma the many problems they have within their marriage, including how they don’t sleep together. Williams uses comparison between the ugly yet child-bearing Mae and Gooper and the beautiful childless couple Maggie and Brick to highlight how greed and the desire to inherit Big Daddy’s fortune is the only reason they spawned their “five same little monkeys”.

At the end of Act II when Brick confesses to Big Daddy that he is in fact dying, he loses his temper branding his family bar Brick “LYING SONS OF – LYING BITCHES”. Williams uses Big Daddy’s description to Brick of the relief he felt on hearing he was supposedly all clear of cancer to build up tension in the scene. Brick, although almost completely void of emotion in other scenarios, feels guilt upon hearing Big Daddy’s plans when he though he had his life back. Williams continuously uses the word “rot” in Big Daddy’s dialogue; for example when he says “Why should I do that? – Subsidize worthless behaviour? Rot? Corruption?” By doing this he is subliminally making the character of Big Daddy make unknowing references to his cancer, which symbolises the way that the family knows about his illness, but Big Daddy himself is unaware.

The whole time Williams is building up drama for the climax of the scene when Brick accidentally tells Big Daddy that he is, in fact, dying. In conclusion mendacity is a tool used by Williams to build up tension in the play. Williams uses the character of Big Daddy and his naivety towards his terminal illness to highlight the extent of the lies and secrets his own family were keeping from him.

The way in which the scenes flow is also another method the playwright uses to create suspense and dramatic tension; although the dialogue is fast paced the conversations between characters, particularly Brick and Big Daddy, are gradually built up to a climactic state until an interruption of some sort, which slows the pace of the dialogue back down. The time period in which the book is set, in Mississippi in the mid 1950’s, contributes to the use of mendacity in the play. Williams understood the gossiping nature of the communities on the deep south of America and uses what would have been the pressure to be well presented to your peers to explain why Brick and Maggie had stayed together when Maggie’s love is unrequited.

Discuss the Use of Mendacity in Cat on a Hot Tin Roof. (2016, Oct 16). Retrieved from http://studymoose.com/discuss-the-use-of-mendacity-in-cat-on-a-hot-tin-roof-essay 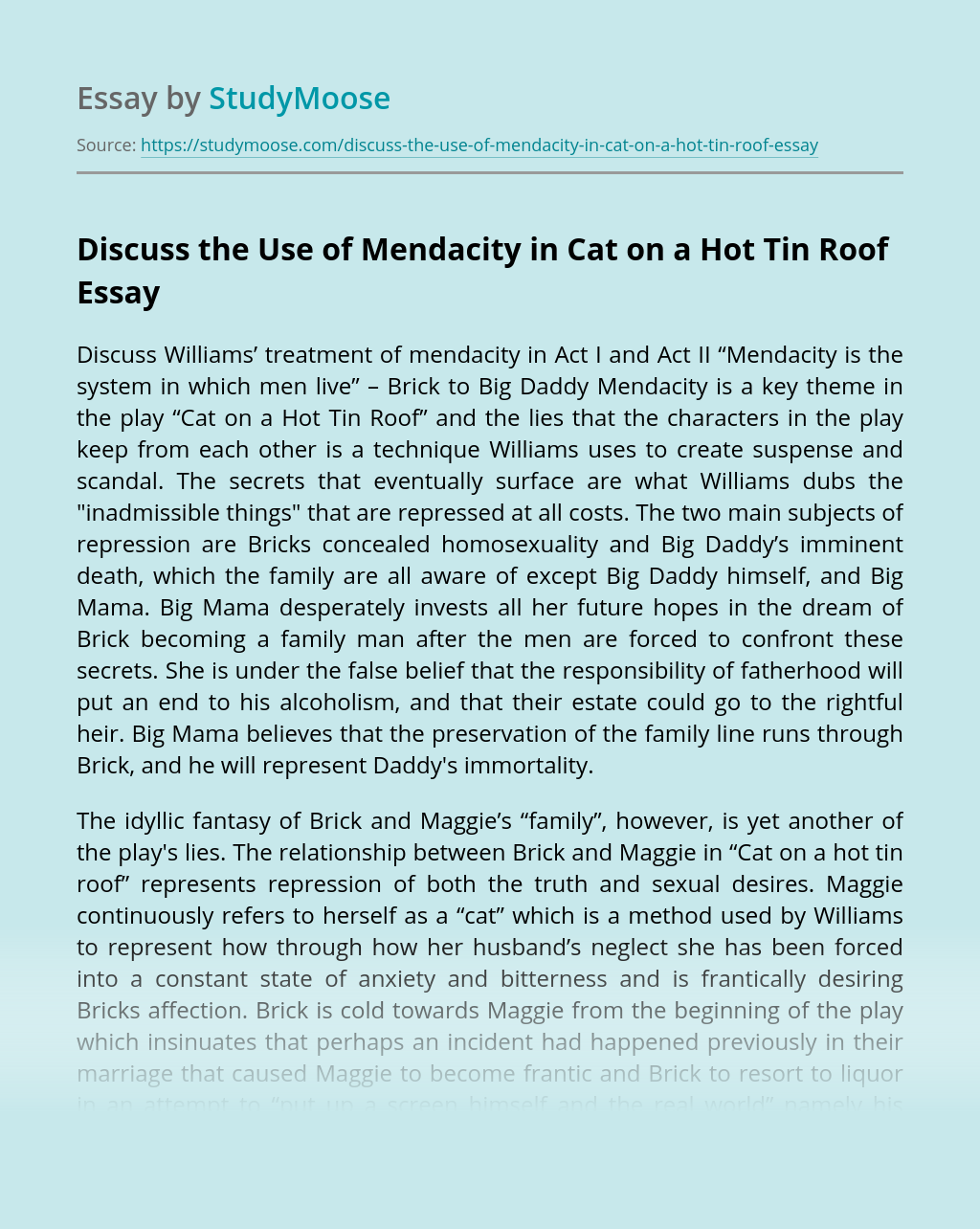