Is the Setting of the Play Important?

A critic has written that a family at the centre of the party “is clothed with the atmosphere of the south as with a garment. ” How important is the setting of “Cat on a Hot Tin Roof” to the play’s dramatic impact? You may consider: – The bed sitting room of the stage set – The wider, geographical setting of the Mississippi Delta – The values of the play of the society revealed in the play In my opinion, the setting of the play is vital to the level of dramatic impact for a number of reasons.

Don't use plagiarized sources. Get your custom essay on
“ Is the Setting of the Play Important? ”
Get custom paper
NEW! smart matching with writer

The main themes behind “Cat on a Hot Tin Roof” are represented and shown through the setting of the play.

For example, the whole play is situated around the bedroom sitting area to put forward a key theme of the play: sexuality. If the setting wasn’t relevant to themes of the play, the audience would find it difficult to fully understand key elements of the play that Tennessee Williams was trying to put across.

The bed sitting room in which the play is based around belongs to Brick and Maggie, two main characters. The irony of this being that bedrooms are assumed to be private and personal, yet it’s the most invaded room in the house.

A prime example being when Big Mama, Brick’s mother enters the bedroom, commenting on how she “hates locked doors in a house… ” Maggie’s responds lightly by stating that “… people have got to have some moments of privacy,” only to receive the invasive and ignorant reply “No, ma’am, not in my house.

” Even as early as Act One, we witness the couple’s privacy being denied. The bed sitting room is also where many secrets of the family are eavesdropped on and later revealed. Again, as early as the start of Act One, Maggie reveals that “The walls in this place have ears,” clearly, it’s not only Big Mama being prying into the couple’s affairs.

It’s also greatly ironic that the scorching heat outside is completely conflicting to the “heat” inside Maggie and Brick’s bedroom. It becomes increasingly apparent as the play develops that there are blatant problems facing the couple’s sexual relationship, again emphasising the recurring themes of sexuality, homosexuality and mendacity. The fact that the play is based around the bedroom of Brick and Maggie also helps the audience gain a better understanding of their characters, especially Brick’s. Not once throughout the entire script does Brick approach another character; it’s always the other characters that approach him.

This shows the audience how reserved Brick is and how he likes to keep himself to himself, despite him being in such high demand with his fellow family members. These qualities of Brick are vital in the understanding of the play’s plot. The geographical setting of the play also greatly affects the dramatic impact. The play is set in the irritatingly hot Mississippi Delta, symbolising both the argumentative tension between characters such as Mae and Maggie and also the sexual tension between characters like Maggie and Brick. The plantation itself is relevant to meanings behind the play and its dramatic impact.

Being built on very fertile land, the plantation shows the irony of Maggie’s great desire to become pregnant, contrasting with Mae who has six, irritating children. It also reinforces that the family are staying on Big Daddy’s property. Big Daddy has the power over both his wife and his sons, for it’s his decision as to who will inherit the land. “I’ll tell you what they’re up to, boy of mine! – They’re up to cutting you out of your father’s estate… ” The question of which son gains Big Daddy’s estate occurs regularly, causing conflict between the two couples.

Whilst enhancing dramatic impact, it also represents the themes of mendacity and money. The history of the plantation itself relates strongly to the theme of homosexuality. Two homosexual men (Peter Ochello and Jack Straw) used to own and live on the plantation whilst Big Daddy worked there. With no family to pass the land onto, they handed it over to their loyal employee, Big Daddy. Knowing the history behind the place, the audience almost expects the theme of homosexuality to occur once again and indeed it does, this time with Brick and his friend Skipper.

The South itself is also relevant to the play’s dramatic impact and putting it into context. With knowledge of the Civil War, slavery and enormous amounts of racism that took place in the South which was to some extent still very much present in the time the play was set, the audience is able to gain a better understanding of smaller characters and their relevance. Language is used for example that today would be considered racist such as when it says “A negro voice answers. ” The black servants are mere voices in the play because of the script’s context.

The South’s battle to cling onto slavery is reflected in the characters when some try desperately to cling onto their past. For example when Brick tells Big Daddy “… Skipper and I went into pro-football after we left ‘Ole Miss’ because we were scared to grow up… ” The family values in which the play is set on is responsible for a lot of dramatic impact. Mae and Gooper’s lack of family values and determination to do whatever it takes to inherit Big Daddy’s plantation contrasts wonderfully with Big Mama’s determination for everybody to get along with one another, “We must all love each other…

” The great contrast allows the audience to delve, even further into the themes of money and family. It’s shown through the play’s entirety that money values only destroy families. The sexual values of the time were to have lots of babies as May and Maggie show us. May is constantly competing with Maggie, using the fact that she’s childless to win arguments, “Maggie , honey, if you had children of you own you’d know how funny that is… ” Maggie also feels the need to lie at the very end of the play by telling her family that she’s pregnant.

The homosexual value of the play is quite relevant as Brick finds refuge in his bedroom and by drinking large amounts of alcohol to escape his homosexual feelings. Both women being expected to have lots of children and Brick having to turn to drink in an attempt to block out unwanted feelings are due to the time that the play was set and what was expected in society. The religious values of the play are to reflect Williams’ own feelings on the matter, creating great dramatic impact at the same time. Reverent Tucher, the family’s local reverent doesn’t even take religion seriously.

He says “Did you all know that Halsey Bank’s widow put air-conditioning in the church… ” The reverend’s main worries are of money and his personal comfort in the church which contradicts everything Christianity stands for. Williams illustrates the characters of Brick and Big Daddy as being intelligent men, with lots of general knowledge and common sense. Therefore when he makes it apparent that neither of them believes in religion, he’s making a very controversial statement, especially among the outwardly religious society of 1950s Southern America.

To conclude, the overall setting of the play has proven to affect the plot of the play, hidden symbolism, qualities of the characters and the key themes behind the play. Without specific references to the setting, the amount of dramatic impact would be absolutely minimal, probably resulting in the audience not fully understanding the points that Williams most wanted to stress and losing interest in the play altogether. So yes, the setting of the play is imperative to the play’s dramatic impact. 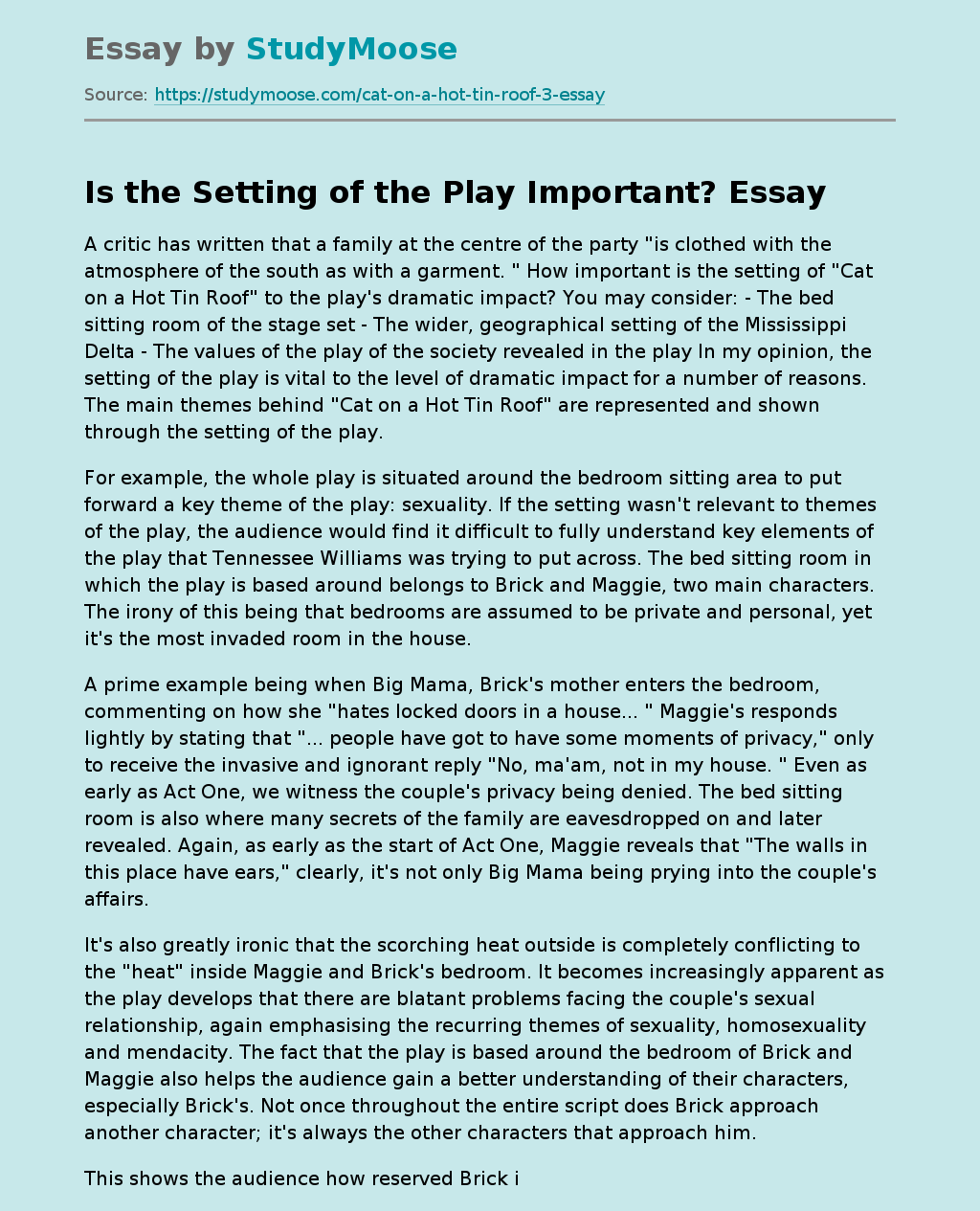