The Great Gatsby (1925) by F. Scott Fitzgerald is not a novel based around gender, but it is an available reading position. By comparing the representations of female characters, we get an insight into the effects of gender stereotypes on individual lives, namely Daisy and Jordan. The role of men in 1920’s America is clear throughout as they all function in a similar, dominant way – earning all of the money causing women to be reliant on them. The way that each character’s gender affects their role in the story unintentionally highlights the inequality of this time.

Don't use plagiarized sources. Get your custom essay on
“ The Great Gatsby Essay ”
Get custom paper
NEW! smart matching with writer

Reading the novel from a contemporary western societal view gives a stark contrast and even though the book wasn’t based on gender, we can clearly see Fitzgerald’s traditional views on gender roles.

The representations of women throughout the novel are varying but each woman is oppressed by the same conservative attitudes. The attitudes of the time were that women were objects; something to show off at a party, but they should always submit to a man.

These were equally as enforced on Daisy and Jordan despite them living in New York away from the traditional Mid-West.

Daisy is the embodiment of a traditional golden girl which means she is compliant in the oppression of women. She marries rich despite loving another man, has a child and seems to do nothing but lounge around in her mansion. She functions as an accessory to Tom, something to use whenever he pleases. To Gatsby, she is an untouchable dream, so far away that she doesn’t seem human anymore.

To both men, she is seen not as a person, but as something that fills any purpose they wish. Gatsby even says, “Her voice is full of money” (chapter 7) which illustrates how Daisy represents everything a man in the 20s desired.

Jordan is the opposite of Daisy, a truly modern woman. She disobeys every gender expectation that Daisy falls into. She earns all her own money (from sport nonetheless), is unmarried, and travels by herself. Even her androgynous name of Jordan disobeys all that’s expected of her. Because of this, she is seen as more equal to men than the other women, but she still doesn’t hold the same level of privilege. Although, at the beginning of her relationship with Nick we see a role reversal with her seemingly dominant, it’s all undone when Nick asserts his dominance by breaking up with her over the phone. Her actions are often disapproved by others and she is portrayed as a lying cheat. This can be seen when Tom says, “They oughtn’t let her run around the country this way.” referring to her family. This shows the beliefs of the time, that women shouldn’t have independence.

Jordan and Daisy both reflect how women were perceived in the 20s. Daisy is seen by others to be happy and perfect, but she is actually trapped by her life. Jordan is the only women with any independence and she is portrayed as a liar and cheat, illustrating Fitzgerald’s views on independent women. Despite the women’s rights movement of the 20s, Fitzgerald’s views are unchanged from traditional views on gender roles and stereotypes, even enforcing them by negatively portraying the only independent woman.

The men in this novel are represented as dominating forces, and how they view the women around them directly reflects Fitzgerald’s attitudes towards gender. Nick and Tom both objectify women without sympathy and use them for their own satisfaction. Nick believes that his is an honest, impartial view, but we can see the irony of this as he often views women all as the same or as objects. We see this at one of Gatsby’s parties, as Benny McClenahan “arrived always with four girls” who are “never quite the same ones in physical person, but they were so identical with one another that it inevitably seemed like they had been there before.” (chapter 4) This observation is an example of Nick being quick to judge all women as the same – unimportant, with not enough personality to bother learning their names. His lack of caring for women’s personalities is also clear when he first meets Myrtle. There is no description of her disposition, only her physical figure; another example of his utter lack of respect towards women. Objectification is common throughout the novel and reflects the attitudes of Fitzgerald, as Nick believes himself to be neutral when instead, he is judging and in turn, oppressing women.

Tom demonstrates an extreme variant of Nick’s views. He objectifies women to such an extent that when Myrtle is doing something he doesn’t like, he sees “Making a short deft movement” (chapter 2) and breaking her nose as inconsequential. He sees Daisy as nothing more than an accessory to show off. He convinced her to marry him by giving her “a string of pearls valued at three hundred and fifty thousand dollars” (chapter 4) displaying how he believes women can be bought, just like any object. While Fitzgerald’s attitudes towards women are conservative, he doesn’t approve of the extremity of Toms actions. The reader is positioned throughout the novel to perceive Tom in a negative light, exposing how Fitzgerald doesn’t agree with the way Tom treats all the women in his life. During the 20s when Fitzgerald wrote The Great Gatsby, his attitudes were not out of the ordinary, although considering the changing role of women, it’s surprising that the character representing an ‘impartial’ view still holds such misogynistic attitudes.

Gender stereotypes and expectations affect each character in the novel, usually in a negative way. Daisy fits into gender stereotypes which creates more expectations and causes her to be an abettor in the oppression of women. As explored earlier, Daisy is the golden girl but because she is seen as perfect, she becomes shallow. One of the ways this is shown to the reader is how she reacts by crying when Gatsby showed her his shirts. When asked why, she responds, “They are such beautiful shirts. It makes me sad because I’ve never seen such-such beautiful shirts before.” (chapter 5) This is not her simply being upset over beauty, this is her realising she made a mistake in marrying Tom as she can’t be with Gatsby and his new money. Gatsby’s wealth is represented by the shirts and the fact that they bring Daisy to tears, illustrates her superficiality and longing for wealth. Although she is an abettor in the oppression, she has moments of understanding of the role she plays. The most memorable moment is when she says, “I hope she’s a fool – that’s the best thing a girl can be in this world, a beautiful little fool” (chapter 1) when talking about her daughter. At this moment it is made clear to the reader that Daisy understands that she’s trapped in this life and that being a fool is the only way to make it tolerable. Fitting into the golden girl stereotype shaped Daisy for the worst, as being expected to be perfect all the time reinforced her shallowness and superficiality, leading her to enforce those same stereotypes and expectations on other women.

Tom fits into an aggressively masculine stereotype which often excuses his unfeeling actions, as that was what was expected of those fitting the label. Tom is consistently shown with a lack of sympathy or affection towards others, especially women who he often doesn’t treat as human. His actions towards Daisy are utterly heartless. Just after their South Seas honeymoon is over, he cheats on her with a maid at the hotel they are staying at, which is just the beginning of his unfaithfulness. While Daisy isn’t happy with his actions, nothing can be done to stop him, as if someone fits into the same masculine stereotype as him, it is often expected that they will be unfaithful at least once. Those that experience this same toxic masculinity are expected to be unfeeling; they don’t have any responsibilities to be a good parent, as that’s what a wife is for. Tom fulfils these expectations. When Daisy wakes up after giving birth Tom is “God knows where” (chapter 1) and in the novel, he is never even seen in the same room as his daughter Pammy. This distance is considered normal and if he cared for his daughter a lot, it may be seen as a weakness as caring for a child has feminine connotations. The expectations that come with the masculine stereotype Tom fits into are damaging as they allow him to get rid of responsibility for his actions. Gender illustrating characters roles in society has had negative results and allowed characters to ignore their duties and, as a result, harm those around them.

By performing a gendered reading on The Great Gatsby, it is elucidated to the reader that gender unintentionally played an immense role in defining the story. As gender isn’t a theme, we can see Fitzgerald’s attitudes on gender as they leak into the way he has portrayed women and the role men play. To a reader in the 20s the function of gender may seem normal, progressive even as Jordan is independent, but in the perspective of a reader in contemporary western society, we can clearly see the backward views Fitzgerald holds and the effects of the gender stereotypes and expectations enforced. 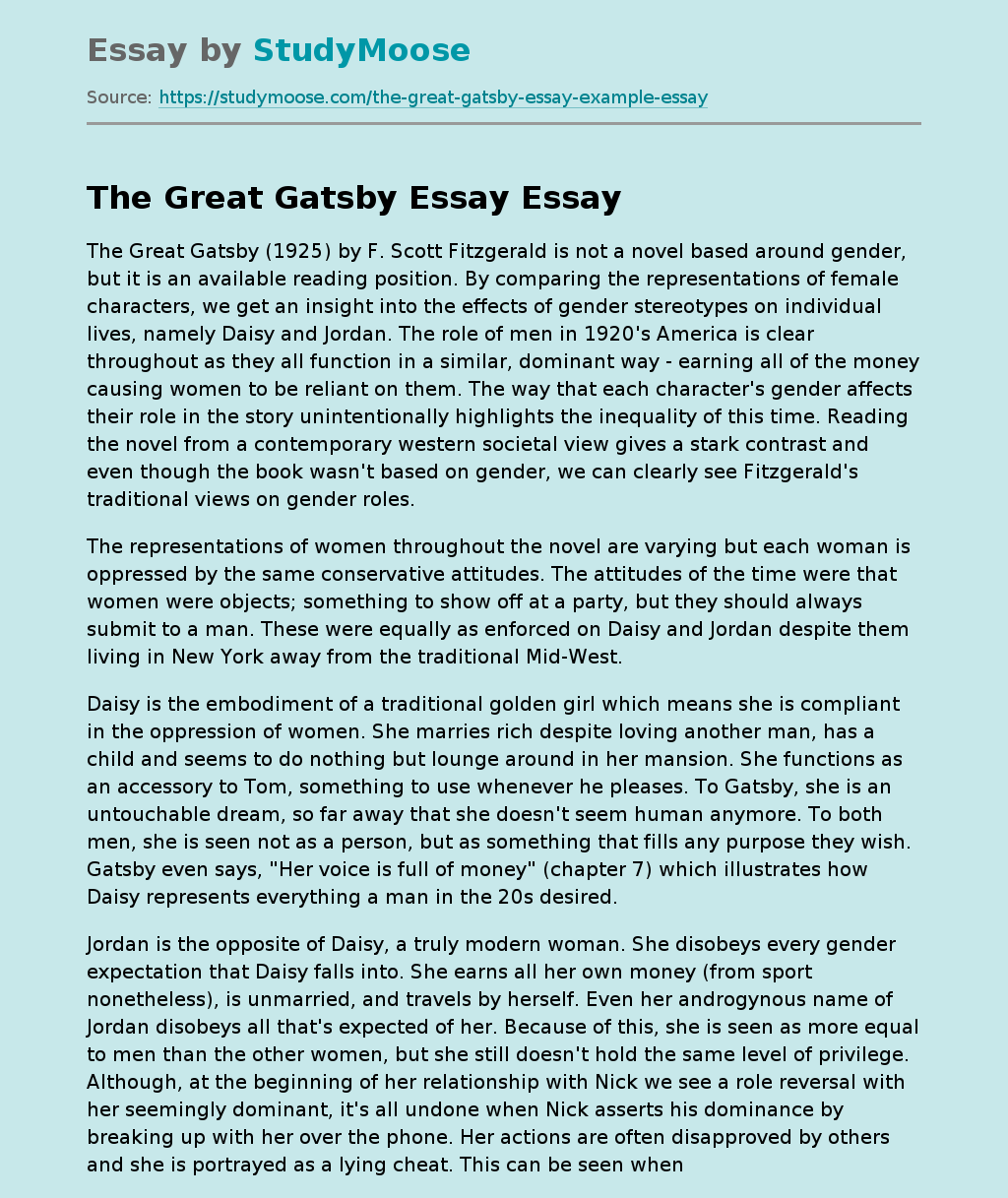