The Great Gatsby is a novel which critically discusses the ideals of the American Dream and recapturing the past. In the film adaptation, producer Jack Clayton stays very closely to the plot and even quotes the novel verbatim but fails to capture the essence of the themes portrayed in the novel. The text did not translate well into film; some facts are distorted, the depiction of the characters are different, the general ambience of certain settings do not match, and the movie is weighted towards the beginning of the book, with half of the movie based closely on the first two chapters of the book.

Don't use plagiarized sources. Get your custom essay on
“ The Great Gatsby: Film and Novel Comparison ”
Get custom paper
NEW! smart matching with writer

Gatsby’s character in the novel is very distinct from his portrayal in the film.

In the novel, Gatsby was seen as one who is withdrawn, quiet and romantic. In the film, however, he is portrayed as one who is loud, obnoxious and openly proclaims his wealth. Also, the movie revolves mainly around Gatsby, which makes him more of a personal character, whereas in the book, Gatsby is a main character but is not as prominent as he was in the film.

Tom’s character in the film also differed greatly from his persona in the novel. As portrayed in the book, he was a “sturdy straw-haired man…, with a rather hard mouth” whose “arrogant eyes had established dominance over his face” and “not even… his clothes could hide the enormous power of (his) body”. (Fitzgerald, 12) Tom was a strong, built man. However, in the film adaptation, he appears no stronger than the average man.

His strength symbolizes his authority over Daisy and his dominance provided contrast against Gatsby, who was more reserved. It also places emphasis on their greed and callousness, which we observed when Tom and Daisy placed the blame of Myrtle’s death on Gatsby and left town. Because this aspect of Tom was left out, the film is less effective in showing this.

Mia Farrow was very convincing in her role as Daisy Buchanan. She appeared to be very sweet and light-hearted upon reuniting with Nick. However, I felt she sounded overly sarcastic in certain scenes, namely, when she said “I’m paralyzed with happiness” to Nick and when she cried when Gatsby threw his shirts at her. Aside from her high voice and sarcastic acting, there is not much difference from the novel.

In the book, Myrtle appeared to be gaudy, impulsive and arrogant. Generally, she was not well liked and was not particularly attractive. The actor responsible for Myrtle’s role seemed too tasteful and classy, not enough for the audience to dislike. Myrtle, in the novel, contrasted Daisy; Daisy was beautiful, elegant and mannerly. Myrtle, in the film, was almost similar to Daisy: beautiful, elegant and mannerly, but to a lesser degree.

Gatsby’s mansion seems more dull in the film than in the novel. In the book, his mansion is described as lavish and tasteful (though Gatsby himself is not tasteful, his mansion and its furnishings are). But in the film, his mansion is but a venue for parties – it is grandiose but lacks taste. This aids in accentuating the fact that Gatsby’s wealth does not satisfy him – his mansion seems grand and elegant from the outside but is tasteless from within; he is rich in material wealth but is empty and dissatisfied inside.

Tom and Daisy’s home was depicted in the novel as an inviting place where “the windows were ajar and gleaming white against the fresh grass outside that seemed to grow a little way into the house.” (Fitzgerald, 13) Tom and Daisy’s house appeared plain and monochromatic with white and yellow furnishings. This does not adequately show the elegance and taste of their home as described in the book.

Aside from the above, the other differences I observed are not very significant as they do not alter Fitzgerald’s meaning for the novel. The addition or omission of various insignificant scenes could effectively direct the audience’s attention to more pivotal scenes. •Neither the man with whom Nick had planned to share his house with nor their maid were ever introduced in the movie. •In the novel, Gatsby and Nick’s first encounter took place at the party. Nick was very relaxed and spoke casually with Gatsby because he was unaware of his identity. In the novel, however, their first acquaintance took place at Gatsby’s office. Nick knew Gatsby wanted to speak to him because his butler had informed Nick of this prior to their conversation, which very formal as a result. •Gatsby is never shown requesting Jordan to ask Nick to arrange a meeting between Daisy and Gatsby. •In the novel, Gatsby grows impatient while waiting for Daisy to arrive for their meeting and takes a walk around the house.

In the film, Gatsby does not talk a walk outside the house. •During Gatsby and Daisy’s reunion, they claim they have met for 8 years. In the novel, they had been acquainted for only 5 years. •After Daisy and Gatsby are reunited, they dance in Gatsby’s mansion. In the film, they dance with only the light from a candle. In the book, they dance with only the light gleaming from the hallway. •At Gatsby’s party, a dog prances on a table and eats some food. This was not mentioned in the novel. •Neither Owl-Eyes nor the library are mentioned in the film. •Nick does not seem skeptical of Gatsby’s wealth or past. •Nick and Daisy are unusually intimate for cousins who have not met for a while. •Daisy is not shown hitting Myrtle while driving in the film. In general, the film rendition of The Great Gatsby follows the book very closely. Even so, the film fell short of my expectations. The acting and the styles of the cast was fair but the appearances of some of the actors were unfitting.

Tom was expected to be a strong, built man and Myrtle was expected to be unattractive, gaudy and clueless – she was supposed to be a pest. The actress who took on Myrtle’s role did not understand her character: she was too sweet; the audience would sympathize for her, rather than dislike her, which was Fitzgerald’s original intent. To portray a more realistic interpretation of The Great Gatsby, those actors should be replaced. Aside from Tom and Myrtle, the rest of the cast was decent. The overall wardrobe was a little disappointing. To my knowledge, the fashion trends of the 1920’s were characterized by and array of eye-catching colours, feathers and tassels, which there was not enough of during the party Gatsby had hosted. I had also expected to see a wider variety of dance moves. While this is not significant, it definitely would improve the overall ambience of the film and would better engage the viewers.

In addition, I would redecorate the interior of Tom and Daisy’s home. In the film, all of their furnishings are white or yellow, very bland. This contrasts the description in the book, their house was inviting and lively. Décor of colour and class would invigorate their living area to more closely match its description in the book. Many scenes of the plot differ as well, between the film and the book. During Nick and Gatsby’s first encounter in the novel, Nick is very relaxed and does not realize who he had been speaking to. In the film, their conversation was very formal and tense. In the novel, Fitzgerald placed Gatsby and Nick’s first encounter in the party to illustrate the fact that Gatsby is unsure of himself.

Placing him in an office setting places him in the position of authority, giving the impression that Gatsby was sure of what he was doing, which he wasn’t (which was why, in the novel, he had approached him at the party instead). The movie should follow the novel’s plot. As well, Myrtle’s death scene was omitted. I feel this was crucial to the story. Also, in the scene where Gatsby reaches for the green light near Daisy’s house, the meaning is lost in the film. In that scene, Gatsby awkwardly reaches out. Instead of reaching out, he should have just stared and appear to be in deep thought.

In all, the Jack Clayton’s rendition of Fitzgerald’s The Great Gatsby was mediocre. Like many films based on books, the themes and much of the meaning are lost in the translation from text to film. Clayton should add new scenes to develop and reinforce the themes and feelings in the film. Even with said improvements, it is difficult to replicate all the meaning in a well written book. Jack Clayton’s version of The Great Gatsby is no exception; it fails to capture the emotions and the spirit of the original. 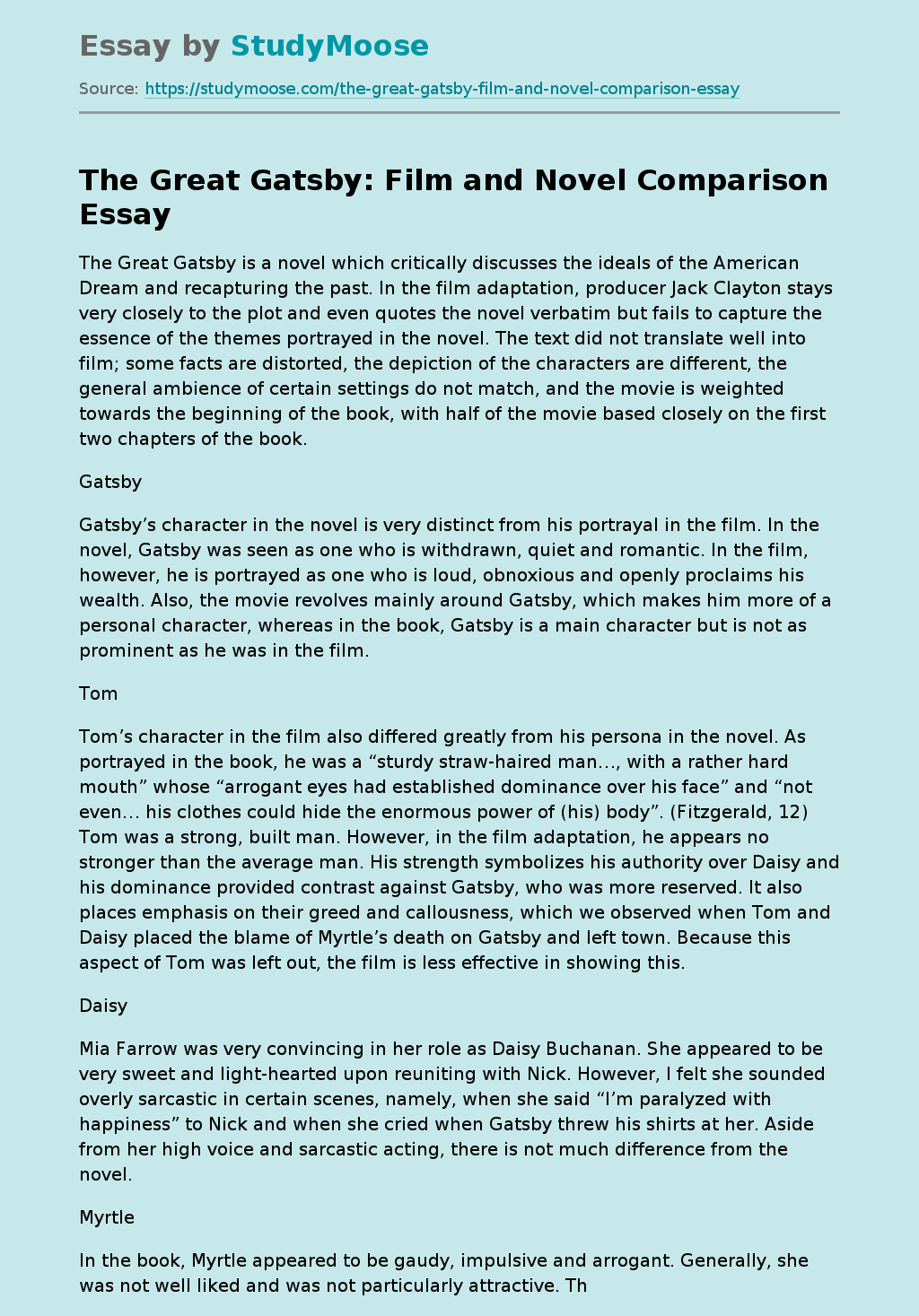