The Great Gatsby movie vs. book In his movie there were many details that remained loyal to the book. There were some others that were changed slightly, either for filming reasons or for careless from the director. Surprisingly, there were some facts that were left out, that in my opinion were critical for the story and the symbolism on it.

Don't use plagiarized sources.
Get Your Custom Essay on The Great Gatsby Book Vs. Movie Just from $13,9/Page

Even though that half-eaten sandwich seemed out of place in his desk, since that gives the impression of a “messy” Gatsby, and which he really wasn’t.

The preparations for Gatsby’s parties were almost as the book described them, with the orchestras preparing for the night, the big tents being placed on the garden, the tons of food being brought for the dinner, the grass getting cut before the event and all those preparations Gatsby had for his parties.

But they skipped a detail that was discussed in class as very peculiar, the hundreds of oranges that would be brought in the morning and the tons of orange skin that were left after the party.

There were also some details that were left the same as in the book, like the sign with the big eyes and the glasses, which is later on seen as a symbolism of God, as discussed in class. The green light across the bay was shown several times to show how Gatsby constantly though of Daisy. Also the childish behavior of Gatsby, while showing his cloths to Daisy was acted very good in the movie. But not everything was perfect in the movie, there were many small details that were changed. They could be omitted either for careless of the producer or just because they were not considered important facts. Some examples are the color of Myrtle’s dog, in the book it was white and brown, while in the movie it was white and black.

This could be done just for practical reasons. The dress Myrtle used during the party at her sister’s house was white in the book, but in the movie its yellow, also the book gives the atmosphere that there are only a few people at her apartment, while in the movie its full of people. Another small detail that was left out was that the man that played the piano for Gatsby and Daisy did it in room for them, while they were seated listening to him, not running around the mansion as it was showed in the movie. And there were also insignificant details that were inaccurate, like when Nick took Tom’s car after the Hotel incident, while in the book he was supposed to take a cab.

Surprisingly, there were many significant details that were left out, which I consider were essential for setting the mood during the Movie. After Tom hits Myrtle, there is a scene in the book where Nick asks Mr. McKee to go out for dinner, this shows the characters lack of importance to the event. In the book this scene is skipped, most likely for budget reasons. Also when Gatsby meets for the first time Nick, he doesn’t ask him if he was in the war, and he doesn’t apologies for being a bad host, since Nick didn’t knew who he was. At the end of the party, Gatsby doesn’t invite Nick for a trip on his plane, and the crash after the party was also skipped. But the most important detail skipped during the movie was “Owl Eyes”. He played a very important role in the story, even though he only appeared twice in the book. He was the only one of the people that used to go to Gatsby’s parties that went to his funeral, in which didn’t rained in the movie, but it did on the book to give the moment a special sad mood.

Some details that were useful to understand the real essence of the movie were just changed to some lame scenes. A very clear example is when Myrtle’s sister tells Nick that Daisy is a Catholic. In the movie the scene just goes on, while in the book, Nick thinks to himself that Daisy is not catholic, which shows that it is a very elaborated lie from Tom. There wasn’t a scene that showed when Gatsby invited the Buchanan to his party, so when they arrived in the movie, it looks like they were like the rest of the crowd that invites themselves. And finally, as scene that most of the people were hoping to see but didn’t appeared, was when Myrtle gets killed, but that is acceptable since it was not shown in the book either.

After analyzing all these details, I came to a conclusion about the movie. Even though there were many scenes that were shown just as they were described in the book, the movie was just a lame “big screen” version of the novel, as it happens lost of the times when passing a book to the “big screen”. Details that were very important like the presence of “Owl Eyes” were skipped for who knows what reason, that just make the story seem less interesting if it was viewed by someone that hasn’t read the book.

The Great Gatsby Book Vs. Movie. (2016, Jul 08). Retrieved from https://studymoose.com/the-great-gatsby-book-vs-movie-essay 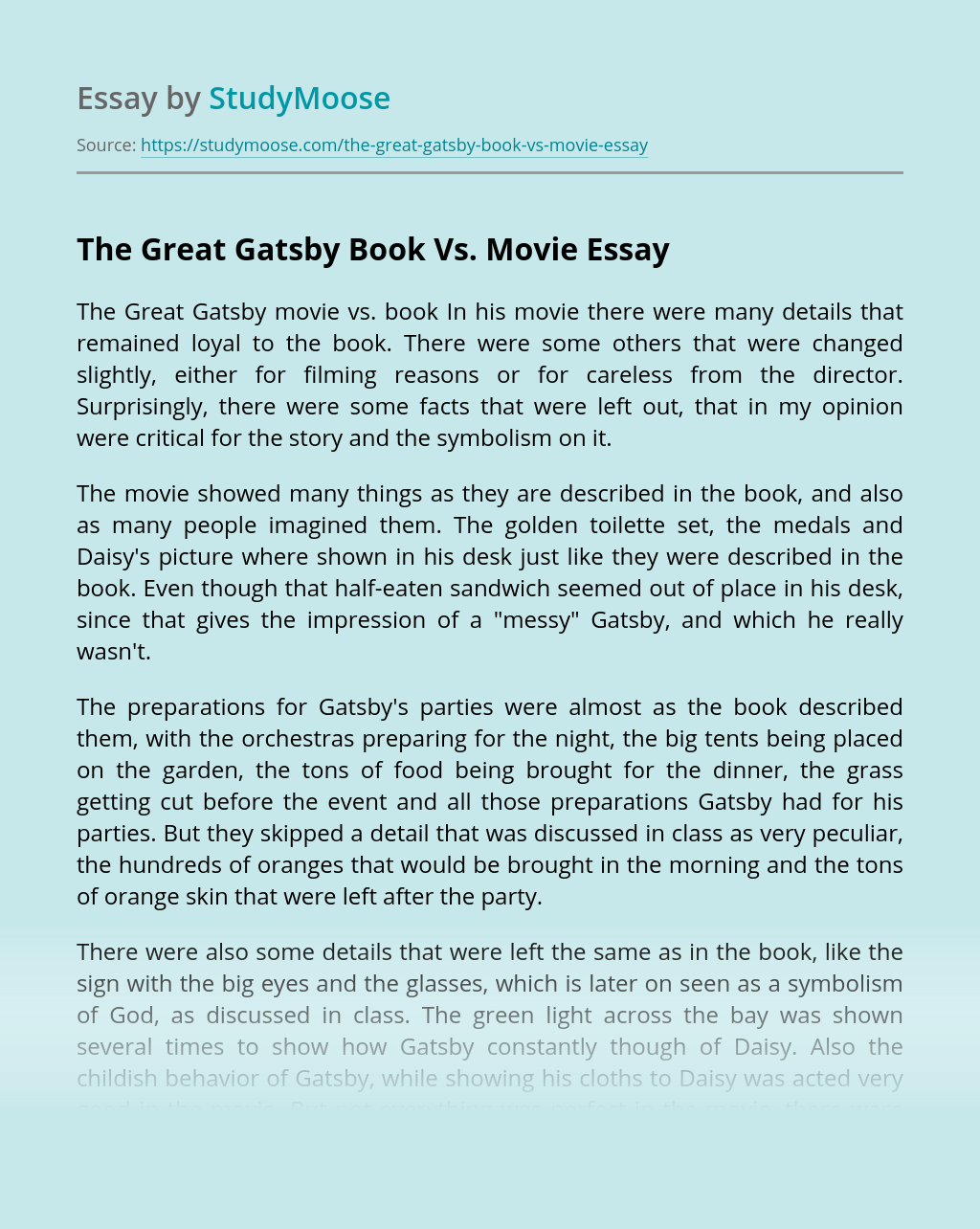