In the early patriarchal era of the Ramayana, men dominated over the Indian societies. All areas of social prominence were entirely run by men in the form of warriors, priests and tribal chiefs. Women had very little or no power at all in the political and public arena. They were raised to look after their families as well as being dutiful wives. Women had the task of being loyal, faithful, loving and compassionate towards their husbands. Individual families were normally set up on a “Male authority” basis, with the husband and father determining fundamental conditions and making the key decisions for their well being.

Don't use plagiarized sources. Get your custom essay on
“ Indian Societies: Gender roles in the Ramayana ”
Get custom paper
NEW! smart matching with writer

Women’s main role in society was that of influencing their family by providing love and affection to their husbands and children while the man was in charge of satisfying his family’s needs.

Male oriented societal values allowed little or no space for women to express their interests and be influential in their everyday lives. Women were traditionally expected to serve their husbands and to have no autonomous interests.

Only men could be rulers and leaders in the patriarchal society where the story of the Ramayana developed. Rama once said on his designation as prince regent: “Mother, my father has appointed me to the task of protecting the people” (Mack 584). This passage clearly illustrates how power was transferred from father to son in order to provide for the people’s needs and for the community as a whole. Rama then as a leader of society must enforce values among others and express his desire to bring remarkable attributes to the people that surround him.

“Sovereignty falls to your share, too, for you are my second self” (585). The need for a sovereign ruler is thus expressed among the community and desired for all individuals in the society.

Women were projected as passive victims of the male-ruled system in which they were trapped. Females were responsible for the well being of the family as a whole. Women were raised with a limited perception of their role and placement in the community. To be a respectful and a good house wife meant for these women to shed themselves of any ambitions and desires they might dream of. They had to conform to what was expected from them, which was to “have no identity besides being a wife or a mother” (Qazi). If they did not conform that way, they were subject to indignity while treated as mere objects whose main role was to tempt men into sin. History has proven that women were alienated if they did not conform according to what was expected of them. These kinds of women were stereotyped as villains or perceived as being tainted.

Men were perceived as being in a role of power, no matter how large their families were. They were brought up with the belief that they were the sole providers for the family. Their failure to perform as it was expected from them led the family into constant perish. Males were in charge of many aspects of society including: making decisions for the community, serving as spiritual guiders, choosing leaders and maintaining an equitable place to live in. Men often made decisions and enforced those decisions upon the family. As Raghunathan noted in his work, “Men lead and women follow”. Women had no chance but to agree to the male’s decisions they imposed to women. The fact that they were born males gave them an advantage over women in the way that they could achieve anything they wanted and become anything they desired.

Men were highly valued and respected if they possessed certain values and ideals within the society. They were educated and trained to be ambitious and to have idealistic values, which were admirable in this specific society. On the other hand, women were taught to shed any ambitions and ideas they may have for themselves. The characteristics valued in men were not valued in women; on the contrary, these characteristics in women were disapproved because of the male-ruled system of the time. “Patriarchy leads to gender inequality in society” (Seeger). Eventually this could lead these women to become isolated from society since they were not allowed to perform the same tasks and duties as men. Women then, had to rely on the love and devotion they would bring to the family while having other interests and aspirations.

In conclusion, the male and female roles in the Ramayana were pre-established by the rigorous society in which the story developed. Males had certain expectations they had to fulfill such as being rulers and leaders in order to be good men. Females, on the other hand, were limited to being faithful to their husbands while expressing their love for the family. Each had a role in society that they could not differ from due to extreme moral valuation. Men were to become the best warriors and to desire power through leadership; women were to become good mothers and proper wives with no intent or desire to achieve higher goals or expectations.

Patriarchy led men into high power positions in the community leaving women with no chance of participation in this field. This type of society facilitated men into possessing key roles in the religious and political arena which served them as a platform to pursue and achieve higher goals. In the story of the Ramayana, men were empowered and women were often subdued due to the patriarchal era that they were living in at the time of the story, which facilitated these typical gender roles. 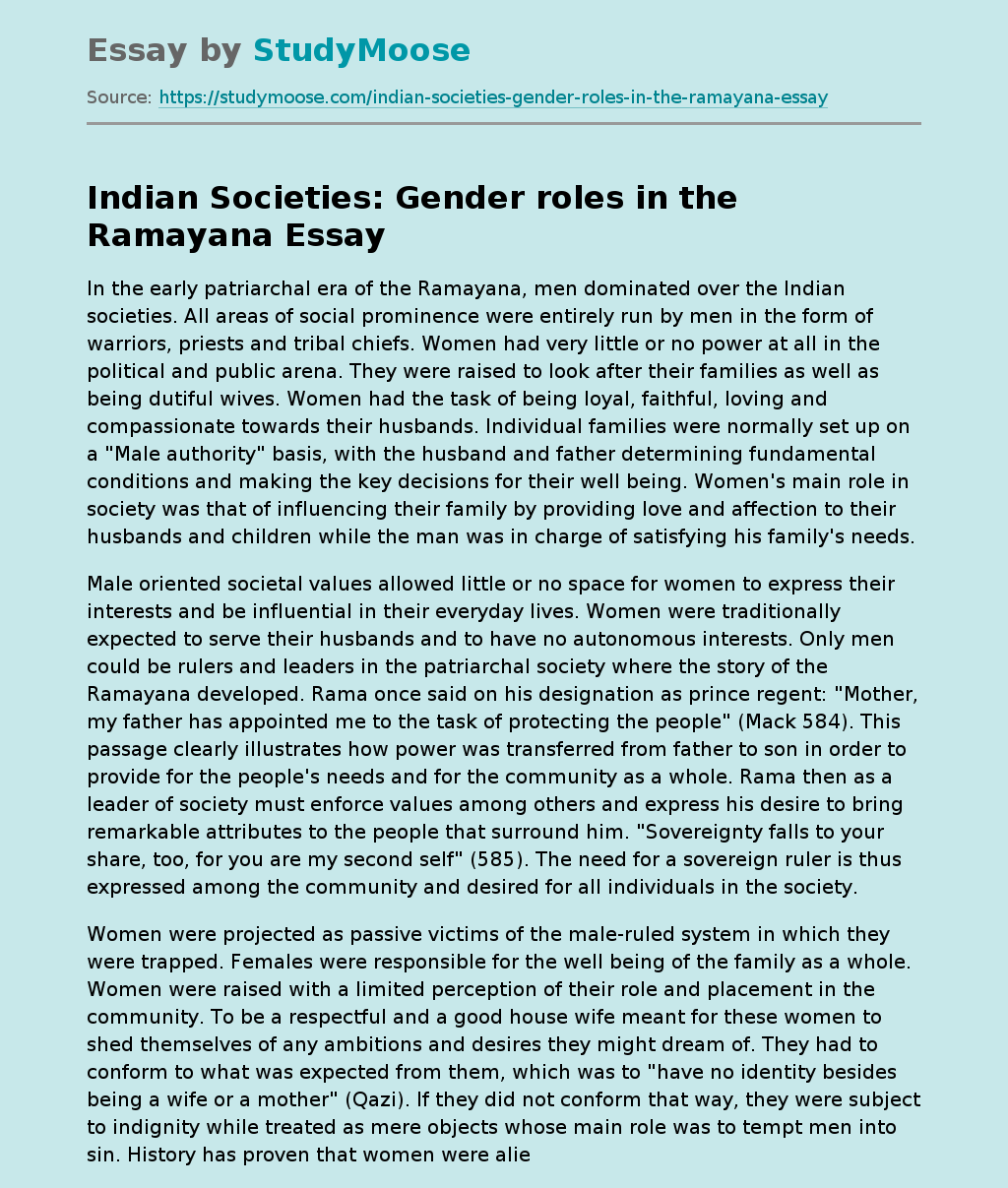