Using Alcohol or Drugs as a Rite Of Passage into Adulthood

Most Americans perceive alcohol consumption and the use of other substances as a rite of passage. This misconception is perpetuated through cultural norms where people believe that drinking is a social facilitator where friends can meet and enjoy alcohol (Piehler & Dishion, 2014).

Don't use plagiarized sources. Get your custom essay on
“ Using Alcohol or Drugs as a Rite Of Passage into Adulthood ”
Get custom paper
NEW! smart matching with writer

However, this misconception can lead to unhealthy behaviors where adolescents engage in these risky behaviors for approval. The use of alcohol or drugs as a rite of passage into adulthood differs from the use of conscious altering drugs during rites of passage in traditional societies in that conscious altering drugs have a low to moderate psychological dependence compared to the use of drinks and drugs (Piehler & Dishion, 2014).

Conscious altering drugs have a limited effect in their initial use and problems come due to continued use as this may lead to drug abuse. This is because most of these drugs create tolerance where the user has to increase the dosage to achieve the same effects of using the drugs.

Users may experience withdrawal effects in the event that they stop taking the drugs (Pritzker & Minter, 2014).

The use drink or drug as a rite of passage into adulthood is believed to facilitate socialization, enjoyment, and relaxation that may lead to dependence. Conscious altering drugs in the traditional society are meant to minimize pain during the rituals carried out in the rites of passage (Pritzker & Minter, 2014).

Most families using conscious altering drugs have implemented steps to ensure safe contexts for individuals undergoing a psychedelic experience. This may be different for individuals using alcohol and other drugs where some of these drugs are unregulated (Pritzker & Minter, 2014). One way of reconciling a drug-free perspective for American youth with acceptance of rites of passage in tribal and traditional society involves educating individuals on the effects of using drugs during this process (Stanis & Andersen, 2014). This will help in changing the beliefs associated with the use of drugs during rites of passage.

These programs can also introduce safer approaches as a rite of passage into adulthood that prevents an early inset of substance use among the adolescents (Stanis & Andersen, 2014). This is because the use of alcohol, conscious altering drugs, and other substances during this process increases the probability of later use of illegal drugs that may have a negative effect on the health of adolescents. These can be achieved through mass media campaigns and community training that can be tailored to change some of the negative social norms in society and increase skills for resisting drugs (Stanis & Andersen, 2014).

Using Alcohol or Drugs as a Rite Of Passage into Adulthood. (2016, Jul 19). Retrieved from http://studymoose.com/using-alcohol-or-drugs-as-a-rite-of-passage-into-adulthood-essay 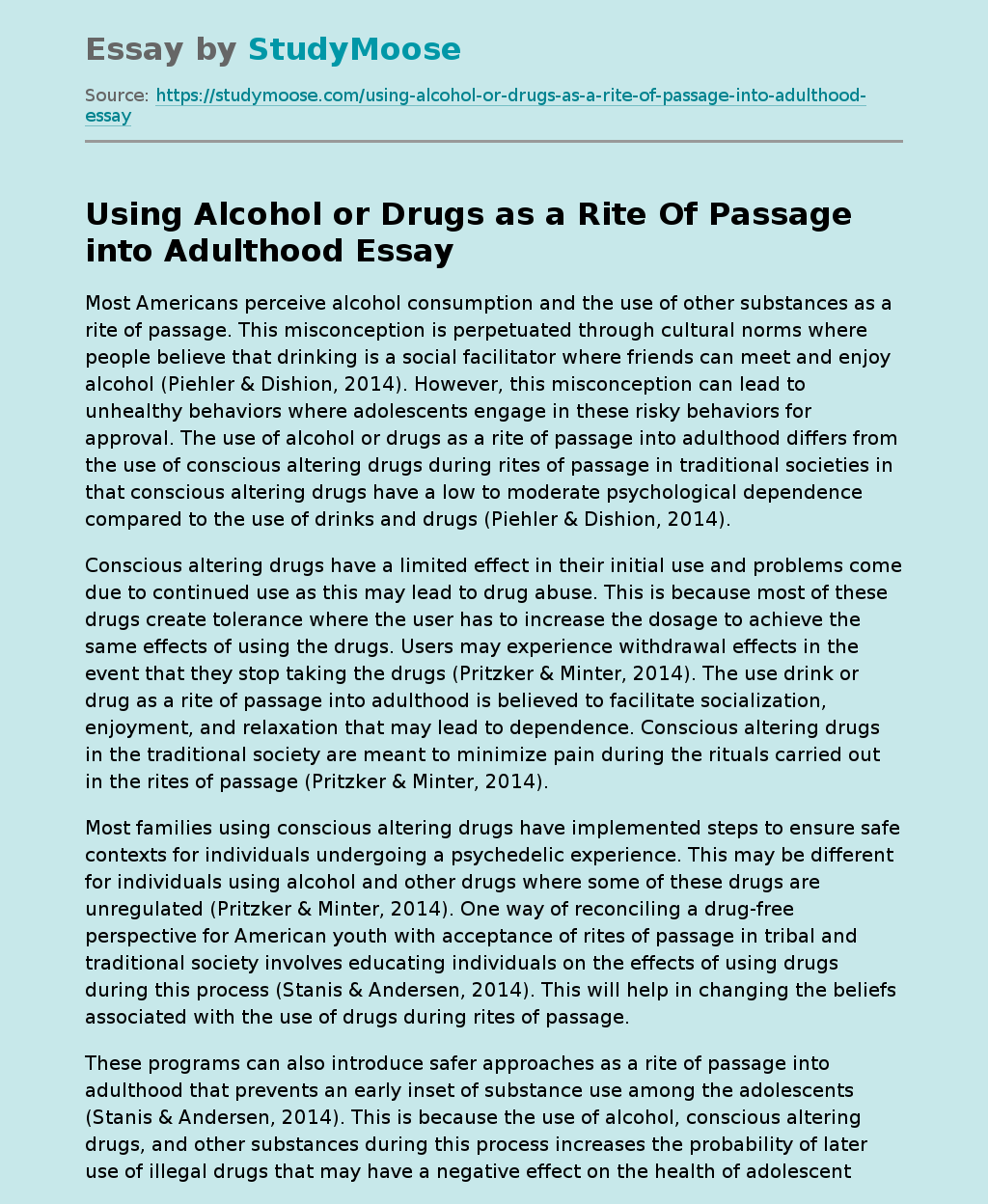