Horses are well known for their strength and Boxer is no different and he lives up to the expectation of being a strong male horse. Boxer is an almost blind follower to the farm and whoever is in charge of it. His almost unreal strength is a great asset to the rebellion and to the farm as he is capable of working harder than any animal. As soon as he learns about Animalism, Boxer makes himself available to do anything for the rebellion.

After the rebellion at the Battle of the Cowshed he proves once again how irreplaceable he is to the farm, as he proves he is a valuable soldier but he shows us that he is a kind and gentle soul as he feels pain when he thinks he has killed the young farm boy. He wakes up early everyday so that he can get more work done around the farm as he gives himself the job of making the farm a better place for his fellow animals.

He adopts the maxim “I will work harder”. This leads him to do great things such as building the windmill twice almost on his own.

Unfortunately, Boxer does have the intelligence that we so wish would match his strength (this is clear when he is unable to learn the alphabet past the letter “D”). He is actually very naïve and innocent and this leads him to be easily confused and taken advantage of by the pigs and Napoleon. After being taken advantage of many a time, Boxer eventually adopts a second maxim, except this maxim eventually leads to his downfall: “Napoleon is always right”.

Boxer shows devotion like no other to the progression of the farm and this is evident when he collapses as he states “It is my lung …. It does not matter. I think you will be able to finish the windmill without me.”

Even when boxer collapses and is close to death, he is still thinking of his work, his fellow comrades and how he can help make the farm better for when he is no longer capable to do more. Sadly for us, Boxer does not seem to grow wiser with age, and even when he is being taken away by the knacker, he needs to be told what is happening before he tries to do something about it. When he realises what’s happening he gets to his feet and tries to kick down the door of the cart but is unable. This is a sad image and a sad end to Boxer as “there used to be a time when one swift kick of Boxer’s hooves would have kicked down the cart wall with ease”. How fitting is it that such a great animal like Boxer, would be put to death in such a cowardly way and by the animal that he trusted and listened to the most, Napoleon.

Boxer represents the working class, a person of no great intelligence but very capable and reliable abilities in work that required labouring. He spends his time in the novel helping with the revolution, and then the pigs. Everything he does, he does to the best of his ability, he does this because he knows that his own hard work will result in a better farm for all animals. However, because Napoleon and the pigs view the other animals as workers for their benefit instead of equals, Boxer’s work is never rewarded; when he becomes injured and unable to work, Napoleon sells him to the knackers instead of letting him retire as promised. 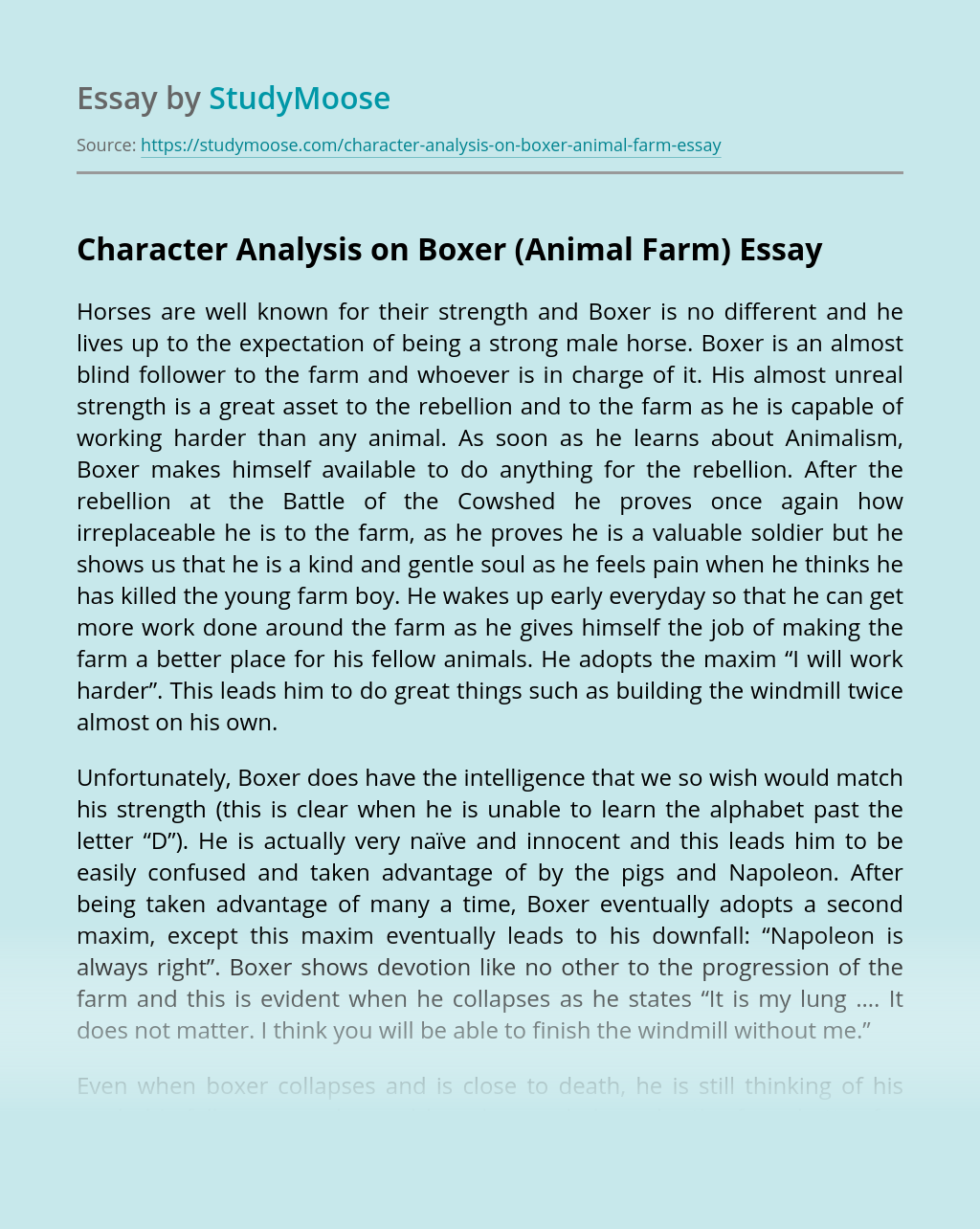