In this controlled assessment I am going to explain in my own words and by using quotes from the book how George Orwell refers to at least three conflicts in the fable Animal Farm. George Orwell wrote the controversial book Animal Farm, and very nearly didn’t get it published. But in 1945 Secker and Warburg published the book and has since become one of the most read and talked about books of our time. Orwell tells his story which refers to the Russian revolution by using an allegory form of text.

Orwell’s book can be read and interpreted on at least two different levels of understanding. 1) Being a fable, which children would hear how animals have taken over the farm and are all living, working and singing together ect. Or the 2nd) in which adults would read it and in most cases, working class family’s would be able to relate to the theme of the book. In the book George Orwell explains to the reader how one of the main characters Old Major (who represents in real life Vladimir lenin and karl marx.

) who is “the prize middle white boar” and the most respected and knowledgeable animal on the farm has had a dream.

Old Major organises a meeting with all the other farm animals in the barn that night. He explains to all the animals the dream he has had and how they would all be better off without the humans (Mr Jones) Old Major goes on to say “man is the only real enemy we have.

Remove man from the scene, and the root cause of hunger and overwork is abolished forever” Three nights later Old Major dies and we are introduced to the pigs! “who were generally recognised as being the cleverest of the animals” the pigs took over the running of the farm animals which soon started to show signs of tension between the two main characters Napoleon and Snowball who are portraying Stalin and Trotsky. Orwell shows us several different conflicts between the two pigs, regardless of the fact that they are both working on getting a better kind of life for themselves and the other animals. Or so they make out to be.

However soon after the rebellion had formed and “jones was expelled” the relationship between Napoleon and Snowball begins to worsen. Consequently the two farm dogs had just had a litter of pups which Napoleon had taken away soon after they had been born, to secretly train them to become his own private guard dogs. After constantly feeling like he is losing his role as leader, Napoleon sets the “fierce dogs” on Snowball who chase him of the farm and is never to be seen again. Orwell uses the adjective word “fierce” in this part of the story to emphasize to the reader just how much tension there has been between the two pigs, He uses connotations and adjectives such as “enormous dogs wearing brass studded collars” to describe the size and look of the dogs chasing Snowball, Therefor leaving Napoleon solely in charge. Soon after this the animals begin to build a windmill which Snowball had originally planned, but with Snowball being gone Napoleon took it upon himself to portray it as his own.

Here Orwell tells us of another form of conflict beginning by using connotations such as “slaves” to describe how hard the Animals have been working instead of using words like hard or more than usual! The animals work hard all year and often go with not nearly enough food but yet still do not complain. The winter that year is hard and Orwell uses short and simple sentences such as “November came with raging south west winds” to build an atmosphere before using verbs such as “violent” to describe the winds before the reader goes on to read that there was a terrible storm and the windmill is blown down while only half way built. Napoleon automatically blames this on Snowball and additionally everything else that goes wrong too. Napoleon constantly goes on about things that are going wrong so that the other animals also start to believe that Snowball is the one doing it.

Further to this, another less tangible conflict is that between appearances and the reality all throughout the book the pigs manipulate the commandments to justify Napoleon’s behaviour. For example, Squealer (who represents propaganda) persuades the other animals that Snowball actually lead the humans to the farm to have what is now named the “battle of the cowshed”. The “battle of the cowshed” was fought and won by the animals at the side of the barn where the commandments are written on, and have over time gradually been winded down to one “all animals are equal, but some are more equal than others” The animals can never quiet remember if or when they have been changed so just assume that they have not and they have always been this was from the beginning. 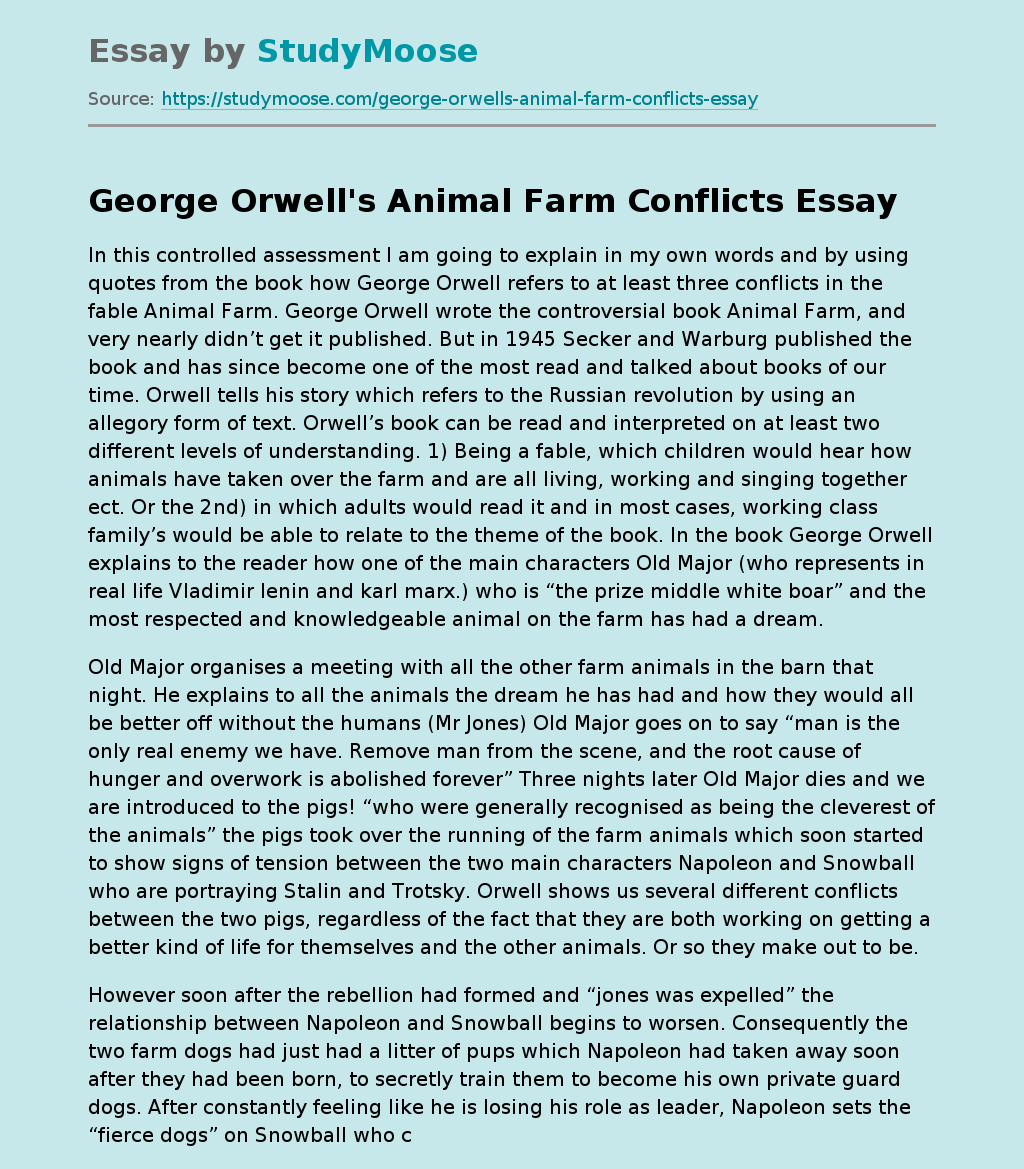