He was a great leader, a devious leader, but caring at the same time. You may have thought I was talking about a man, but I was talking about a very powerful pig on a farm. I read a book called Animal Farm by George Orwell. The animals in this story represented humans in the Russian revolution. It was a very interesting book and I related most to a character named Snowball. The character that I feel represented me the most is an eloquent, passionate, and intelligent pig named Snowball.

Don't use plagiarized sources. Get your custom essay on
“ Animal Farm: Snowball ”
Get custom paper
NEW! smart matching with writer

In the beginning of the novel, Snowball was the leader of Animal Farm. He and Napoleon often competed against each other. Even though Snowball believed in Animalism and felt that pigs were more superior to the other animals on the farm everyone still agreed with everything that he said. He created the slogan “Four legs good, two legs bad.” Snowball had always won the animal’s side against Napoleon. Later on, Snowball led a battle against Mr.

Jones and the other farmers.

The crusade was called the Battle of the Cowshed. After the animals won, Snowball had even more power than he had ever had before. He had an idea that they should build a windmill to power the farm and provide better service for the animals. Napoleon realized that Snowball had to leave the farm. He got Snowball to leave the farm by having dogs chase him away and he never came back after that. The author of Animal Farm named George Orwell, represented Snowball as Leon Trotsky.

I think that Orwell did a very good job comparing a pig to a tremendous war leader from the Russian revolution. Snowball and Trotsky shared many characteristics.

Some of them are that they were both clever leaders, they both wanted to make life better for their comrades and that they were both admirable, good speakers. In my opinion, it seems like it would be very difficult to represent important, influential people from the Russian revolution to animals. Orwell did a very nice job of comparing the two. Not only does Snowball compare to Trotsky, he also can represent me too. The competent pig, Snowball can represent me in some ways too. We are both smart, nice, caring, and responsible. Another way that we are alike is that we both compete against people. Snowball competes against Napoleon, and I compete against other girls at dance competitions.

As you know, Snowball was a devious but caring leader. He led the Battle of the Cowshed, had conflicts with Napoleon, and got chased out of the farm by vicious dogs that Napoleon sent to attack him. I believe that Snowball was a better leader than Napoleon because he cared more about the animals, but at the same time Snowball treated the pigs better than the rest of the animals on the farm. Snowball may have gotten chased out of the manor farm, but he will always be my favorite and most representable leader from the book. 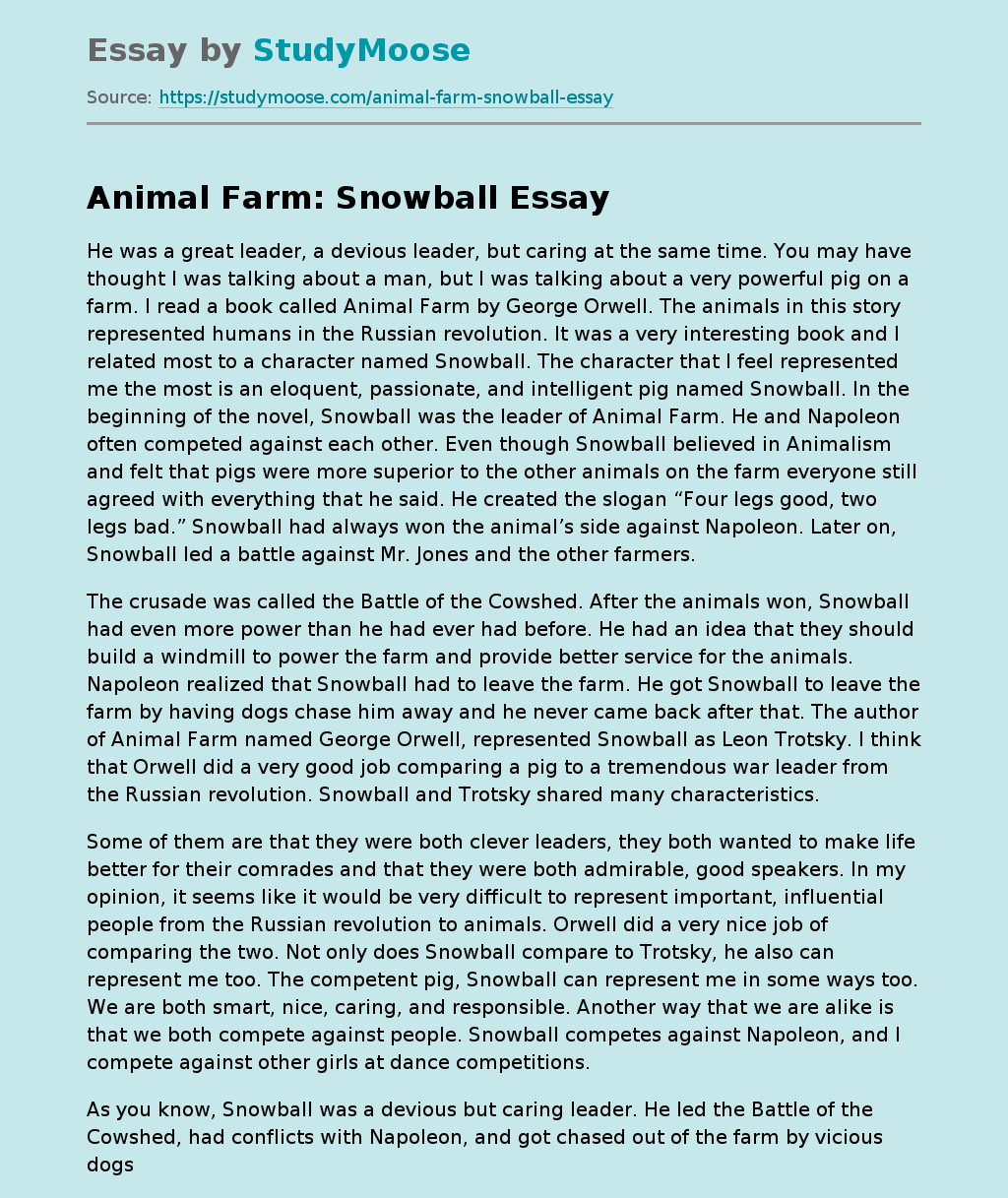