To a large extent, ideology is like a religion: it symbolizes and intensifies conflicts between groups and states more than it causes them. Ideologies have a somewhat weaker hold on core values and absolute truth than religions do, so they pose a somewhat fewer problems for the international system. For realist, ideological differences among states do not matter much, because all members of the international system pursue their national interests in the context of relatively fluid alliances. For example, the Cold War was a global ideological struggle between capitalist democracy and communism.

Turn in your highest-quality paper
Get a qualified writer to help you with
“ Ideological Conflict ”
Get high-quality paper
NEW! AI matching with writer

But the alliances and military competitions in that struggle were fairly detached from ideological factors. Over the long run, countries that experience revolutions based on strong ideologies tend to lose their ideological fevor: •Iran’s Islamic fundamentalism in 1979 ?China’s Maoist communism in 1949,etc In each case their ideology had profound international implications. Some causes of ideological conflict are: ? The perception that one core value is being challenged or called into question.

The belief that someone else’s attempt to adapt an ideology to changing circumstances is a threat to the ideology itself Lately revolutionary governments turned to the pursuit of national interest that as we know are goals and ambitions whether economic, military or cultural above the ideological ones; nowadays we can refer to some ideological clashes that still occur, for example the one between the United States and Venezuela that for a long time had suffer from political antagonism. Sometimes even self-proclaimed ideological struggles are not really ideological.

For example in Angola in the 1980s, the United States backed a rebel army called UNITA against a Soviet – aligned government, supposedly a struggle of democracy against Marxism. In the truth, the ideological differences were quiet arbitrary. This conflict, finally ended in 2002, really had nothing to do whit ideology; it was a power struggle between two armed, ethnically based factions fighting to control Angola? s oil, diamonds, and other wealth. In the short term, revolutions do change international relations – they make wars more likely – but not because ideology. 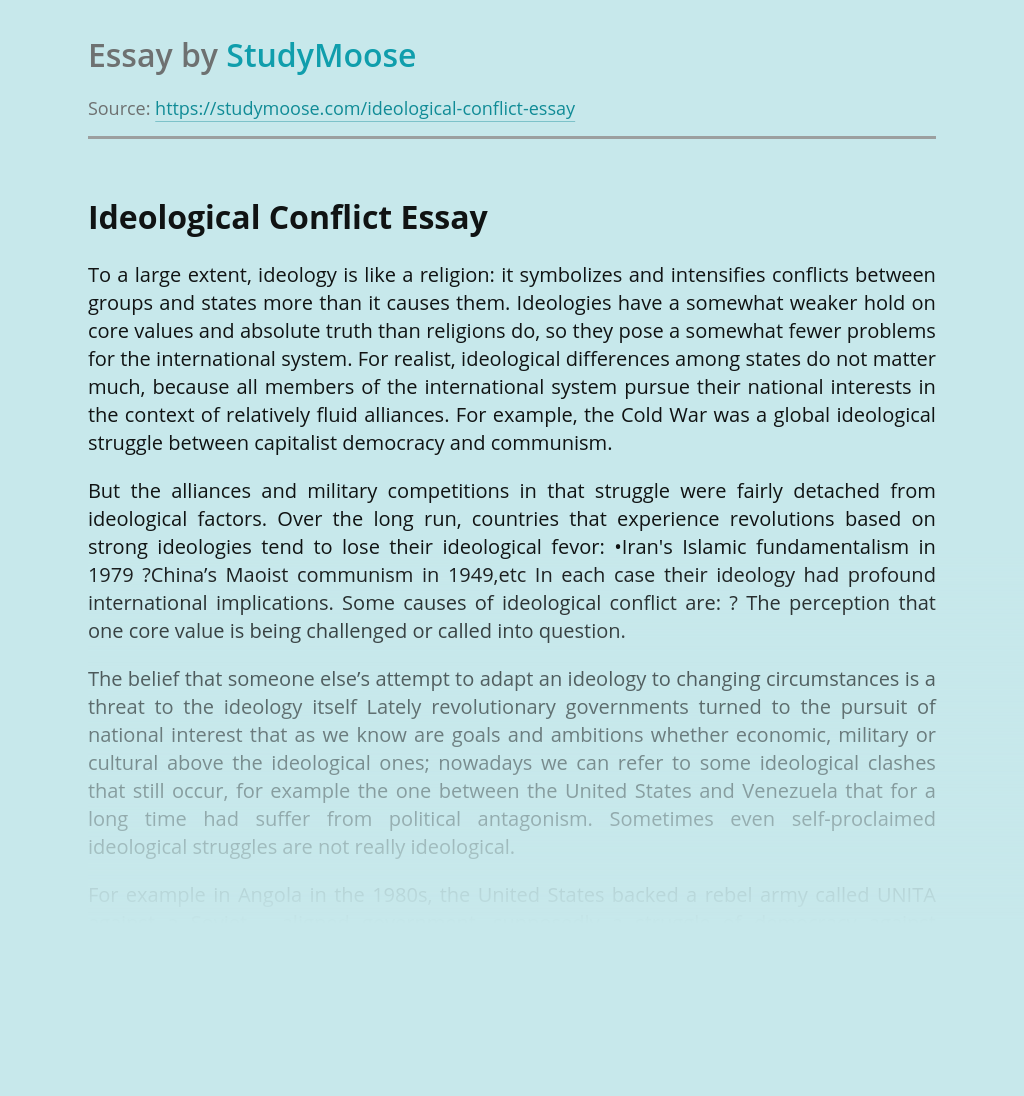 Turn in your highest-quality paper
Get a qualified writer to help you with
“ Ideological Conflict ”
Get high-quality paper
Helping students since 2015
Stay Safe, Stay Original