Impact of Technology on Mankind and the Natural World

Humans have impacted this world greatly with the increase of technological advances. For the most part, though these things have been helpful in creating a Global Community, the impact of this rush of technology has been negative. The fast-paced industry of technology is of the mindset of “faster, better, more efficient.” This betterment of the current technology has left a lot of waste in its path. Old computers and cell phones have little use anymore and are hard to recycle. Although there has been a huge negative impact there also have been some great positives that have helped in bring the world closer together.

Don't use plagiarized sources. Get your custom essay on
“ Impact of Technology on Mankind and the Natural World ”
Get custom paper
NEW! smart matching with writer

In respect to Transportation, we have made more progress in the last ten years than we have in the last century. We have quickly set up huge diversity in the market of transportation; now it is possible to travel father than ever before. With this ease of travel, trade and tourism booms and has to created links around the world leading to co-operative programs like the United Nations, the Red Cross and co-operative space programs.

These kinds of connections would not be possible without the growing communications trade that has risen up in the last thirty years. With television many are able to access news broadcasts from around the world, getting exposure to the variety of cultures around the world. Unfortunately less than 30% of the world’s population has this advantage. Although, it can also be argued that it’s not much of an advantage the way the Western World uses it, most teens by the time they graduate will have watched over 15,000 hours of television; a waste of valuable time most would say.

However, with the array of communications technology we have, knowledge is becoming more accessible. Information is available at the click of a button; facts on a new topic take only a search on Google. With the invention of internet, a new variety of voices are being heard. Sharing opinions and ideas with someone on the other side of the world costs little to nothing and has served to spread different cultures. On the other hand, because of this western has begun to dominate the world. Through movies and Hollywood, the population is mimicking the North American way of life.

Even with all these advantages, the gap between the rich and the poor countries is increasing due to their lack of access to these advances in technology. North American consumerism is responsible for keeping them that way. Our desire for cheaper clothing of good quality has caused the best land of Indonesia and China to be planted with the crops needed to make these products; instead of planting food to feed their starving population. With scientific advances we are able to prevent their crops from insects, disease and drought. We can now create genetically modified corn that will provide the necessary nutrients that will allow children to fight off disease that normally would kill them because they just don’t have the immune system to fight it. But instead we sell it to the highest bidder, make a profit and never think twice about how much our new Nike shirt really cost.

Overall, man’s technological inventiveness has brought about half the world closer together. Physically, the distances are no longer unimaginable and communication is easier and cheaper but this technology has not been used to bring all the countries equality, or at least helped the poorest countries to have reasonable living conditions. Instead our small percentage of the world’s populations consumes the majority of the world’s resources. If this is advancement, then my definition must be horribly wrong. Somewhere along the line we lost all idea of equality within countries. If we’re not inventing new ways to make the world better, aren’t we just making it worse? We are destroying our ozone with pollution, leaving marks on the moon, causing cancer and turning our planet into one big oven. It doesn’t sound much like improvement; these inventions can be used to better the world, but collectively we [being the next generation] have got to take the first step.

Impact of Technology on Mankind and the Natural World. (2016, Jun 27). Retrieved from https://studymoose.com/impact-of-technology-on-mankind-and-the-natural-world-essay 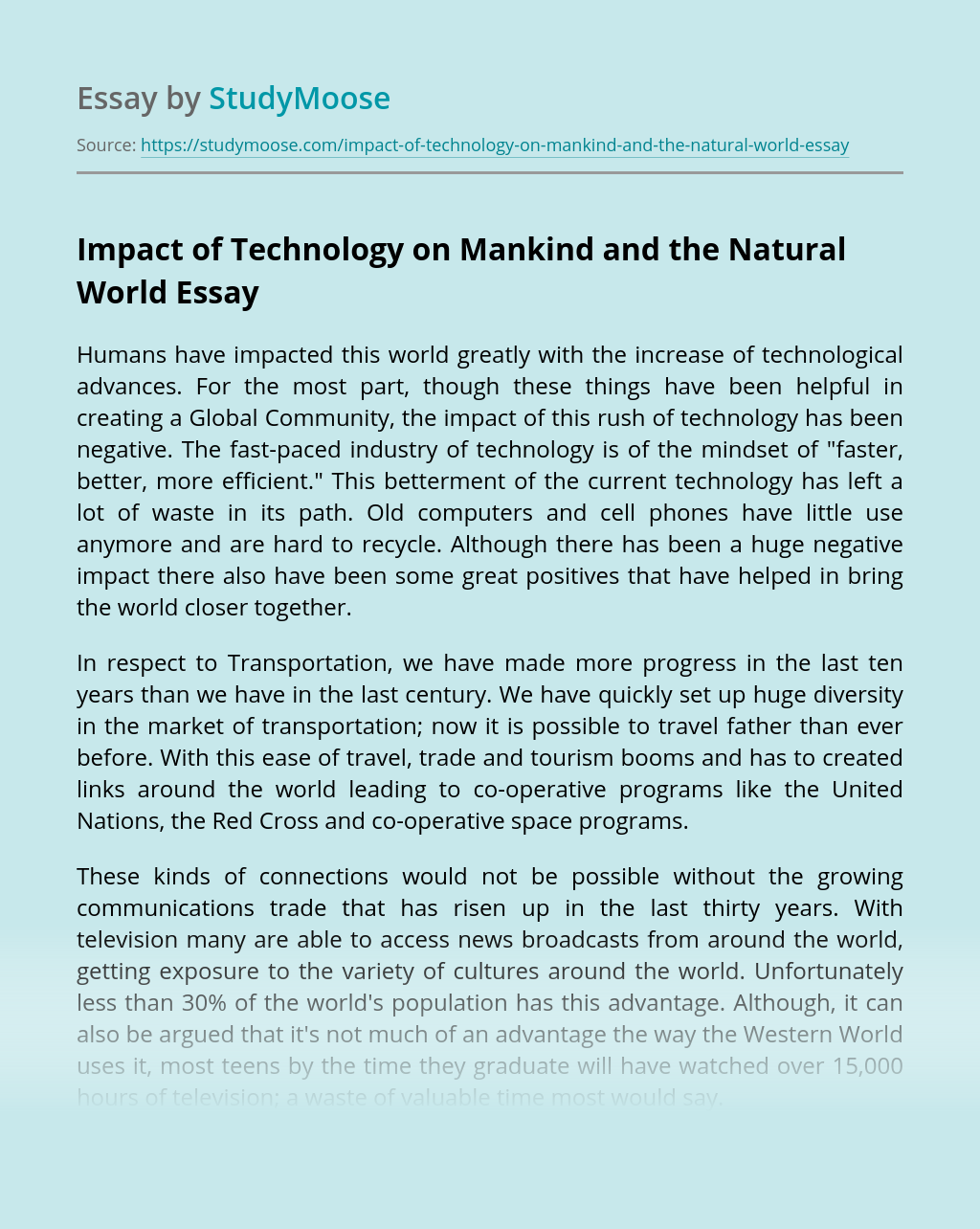