Technology Has Made The World A Smaller Place

There is many ways that technology has made the world a smaller place and I plan on explaining a few of the ways that it has but there is just entirely way to many way that it has changed to talk about in just one essay. A few examples is the internet, social media, and the way we travel around the world.

The first thing I am going to talking about is how the Internet has made the world smaller. The Internet has allowed pretty much allowed us to do anything.

Don't use plagiarized sources. Get your custom essay on
“ Technology Has Made The World A Smaller Place ”
Get custom paper
NEW! smart matching with writer

For example you can go onto Google and looks any place in the world with just a view clicks by using satellites. It has also allowed us to learn new things about the world, such as you can learn a new language on the internet and when you learn a new language you can communicate with people from that area and relate to them and continue to learn about there culture or simply get directions if you are there.

The next thing I want to talk about is the way we travel and how that has changed. No more than one hundred years if you wanted to get across the ocean or just travel across the country you would either get on a boat or on a train and it would take a really long time just to travel, but now you can simply get on a plane and before you know it you can be across the country. But planes have not always been as advanced as they are today.

Before they didn’t have passenger planes it was just a single person thing and they weren’t as fast, but since then they have developed a way to carry hundreds of people in just one planes along with their luggage. Also before the pilot would have to be on the controls at all times but now the pilot doesn’t have to be on the controls the entire time they can use auto-pilot allowing the plane to fly itself.

Read more: The World is a Smaller Place these Days

Another way that the way we travel has changed is trains. Before trains were used to travel people and goods across the country which is still what they are used for, but now trains can travel at faster speeds and pretty much are controlled by the people back at the train stations which is amazing. The last way that we travel that has changed that I am going to talk about is our cars. Cars have gone all the way from having to crank it to start it all the way to being able to start the vehicle when you aren’t even in it.

They also used to only be able to go around 40 MPH but now they have cars that are able go well over 250 MPH which is insane and unneeded but we have the capability which is incredible they also have a lot of new safety features that were not available it the old vehicles such as seat belts, air bags, reinforced frames, and mirrors that tell you if someone is in your blind spot or not. The new vehicles also have back up cameras, auto assist parking to help you parallel park without bumping into other vehicles.

The next thing that I want to talk about is social media and how it has brought everyone together. Some social media sites such as Facebook, twitter, and instagram have allowed us to connect to everyone around the world and be able to chat and talk to these people or just simply share some things that you think are cool. You can also use social media to learn stuff about other people around the world what they do on a daily basis. It also can teach you simply how they communicate with other people from that place. Social media also gives you a way to talk to people that you cant normally talk to like family that lives far away making it seem like they aren’t that far away bringing people together and making the world seem smaller.

Technology Has Made The World A Smaller Place. (2016, Sep 22). Retrieved from https://studymoose.com/technology-has-made-the-world-a-smaller-place-essay 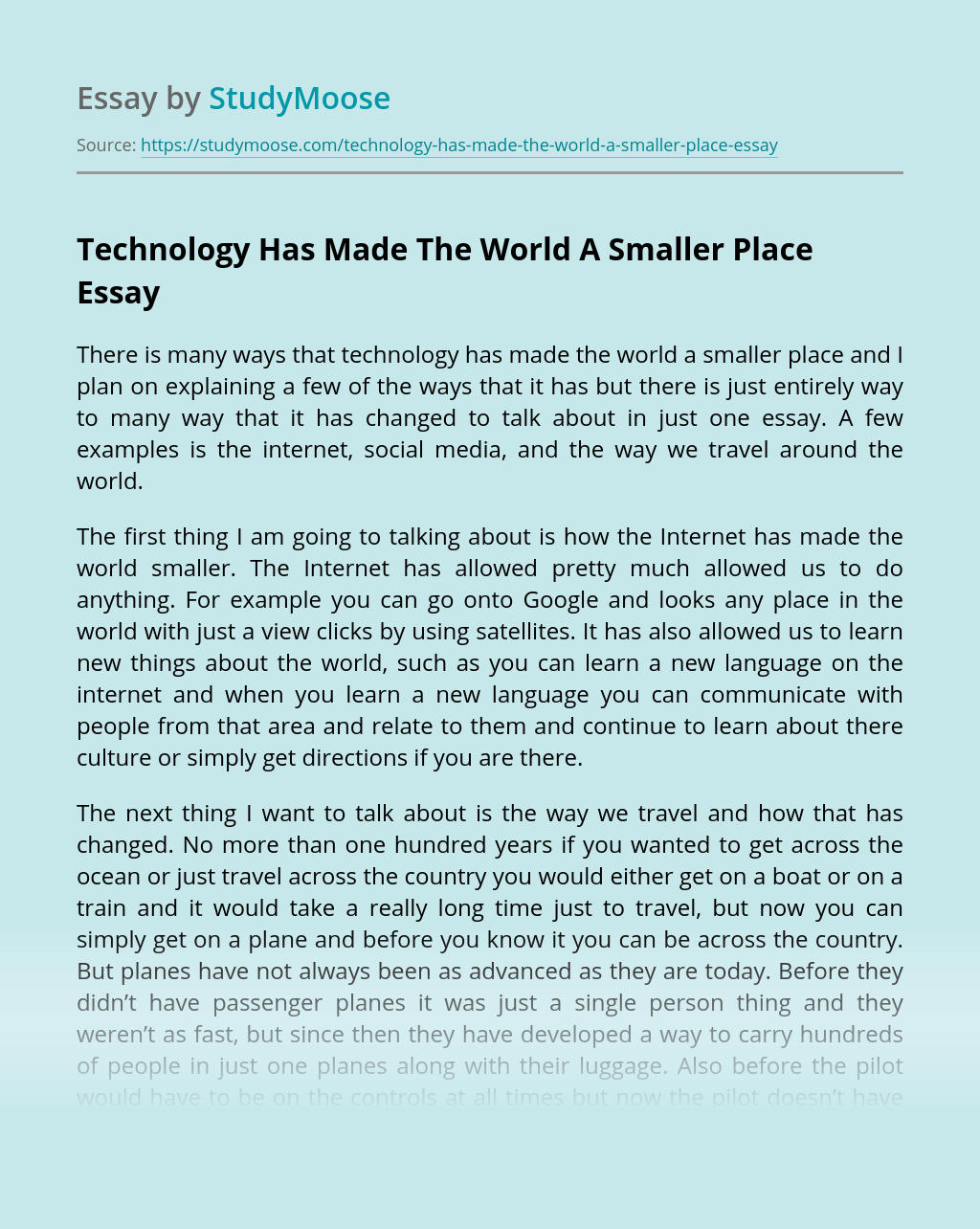