Although defining culture into a universal definition that fits every social or academic mold can be a daunting task (Fischer, 2007), it is safe to say that every person in this world belongs to a certain culture. Recent trends in the demographics of America show exactly the possibility of separate cultures interacting, thereby indicating that multiple cultures flourish on that part of the world (Kim, 2001). In a larger sense, each country across the globe is home to a wide variety of cultures.

Don't use plagiarized sources. Get your custom essay on
“ Private and Public Culture: Redefining the Borders ”
Get custom paper
NEW! smart matching with writer

The people who belong to each of these cultures certainly have their own cultural affiliations and the groups of people in each society also have their own as a collective body. As a result, a person, according to Richard Rodriguez, can become someone who is a part of a crowd and someone who is distinct from it. But is there really a distinction between public culture and private culture to begin with? To say the least, the notion of a private culture presumes the existence of a culture that is isolated in nature and is different from other cultures.

A private culture, therefore, is one that is exclusive and cannot be easily absorbed by a foreign entity. If there are private cultures—indeed, if there are isolated and exclusive cultures—it is difficult to understand why cultures sometimes overlap with one another, why one culture shares several basic yet significant characteristics with other cultures, or why people have the tendency to absorb other cultures when the necessity and the situation call for it?

I think there are no innate differences between public and private cultures simply because the notion of culture, in my opinion, is a state of the mind.

Culture is something that is conditioned during the extent of a person’s life. It is something that is taught and passed-on from one generation to the next as a mental idea that seeks to differentiate the self within the group from other groups. In reality, that state of mind is only an excuse for intolerance when there should be no reason to sow hatred or indifference on the basis of cultural distinctions.

Such distinctions do not carry actual value that is worth propagating for we live in a world where the only culture that exists is the culture of humanity. That being said, there is a need for college students to search for more than what we have at home simply because the home is not a bottomless source of information. To know the world around and appreciate it in its whole us is to go beyond the limitations imposed by the social institution of family.

The task of understanding the rest of humanity requires us to step out of the comfort zones provided by homes and to come face-to-face with people around us. There is the culture called humanity waiting to be explored outside the home. The foundation that our families provide is incomplete in much the same way as that which society and our peers expect of us is similarly partial. There is need to explore both areas because they are two sides of the same coin in a manner of speaking. Initially, we are armed with information provided to us by our families.

To develop into more complete human beings, we need to gather more comprehensive information from other sources such as formal learning institutions and social groups. However, breaking away from our families does not mean abandoning them altogether for the sake of living a more rounded life. While it is true that we need to severe ourselves from the clutches of our families at some point in time, it does not necessarily mean that we also have to totally forget them or leave them behind never to return again.

What is needed is to learn to remove the limits imposed to us by our families in our attempt to understand the society and the rest of humanity while not failing to remember our so-called “roots” and tap them whenever the need arises. References Fischer, M. M. J. (2007). Culture and Cultural Analysis as Experimental Systems. Cultural Anthropology, 22(1), 1-65. Kim, E. Y. (2001). The Yin and Yang of American Culture: A Paradox. London: Intercultural Press. 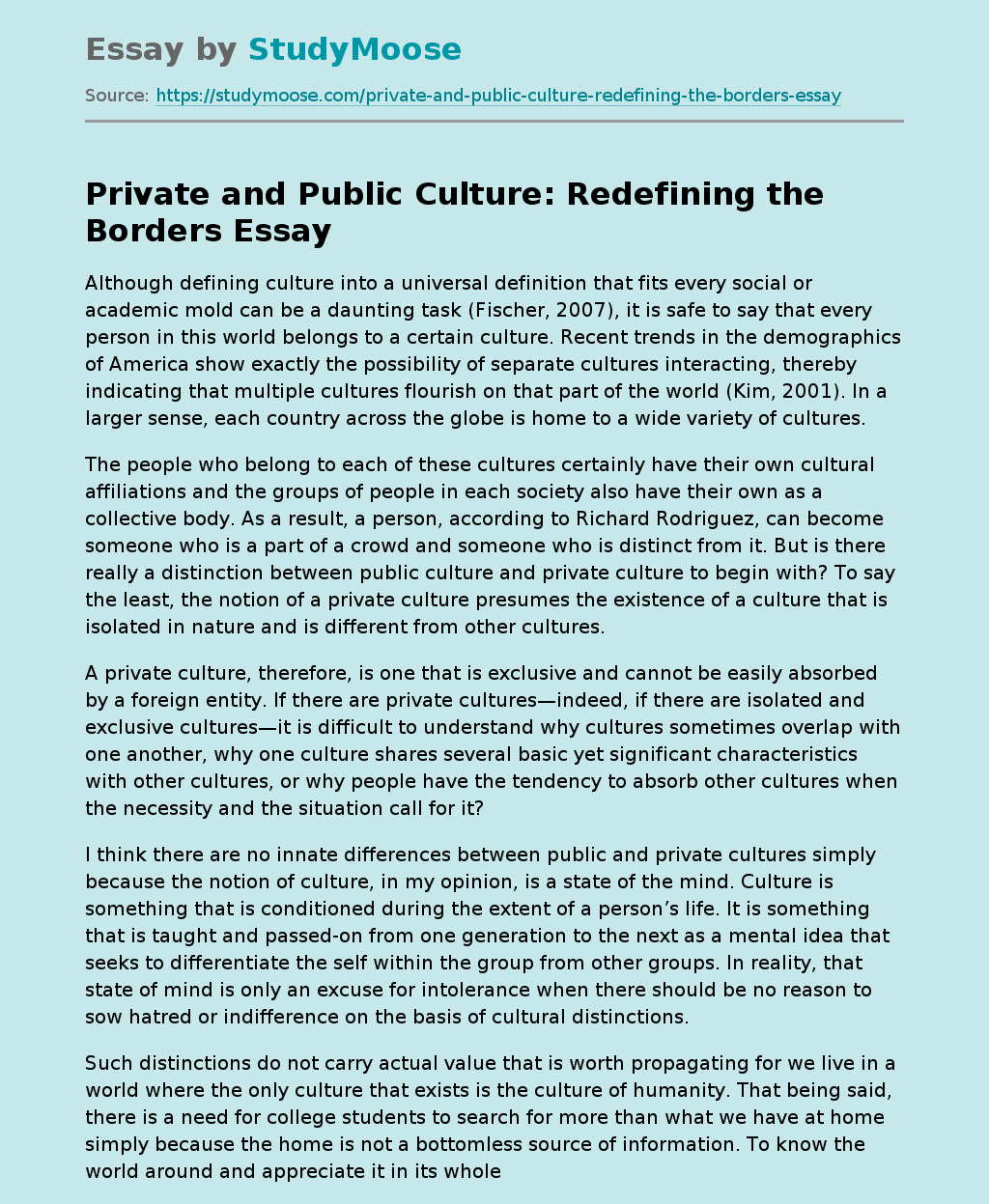