In Thomas King’s story, “Borders” the matter of identity is taken to a different level as the protagonist, Laetitia’s mother, remains adamant in the matter of her cultural heritage even when confronted with the possibility of not seeing her daughter. In a strange incident at the American-Canadian border, Laetitia’s mother is confronted by a border guard regarding her identity while she and her son were on their way to see her daughter in Salt Lake City.

It is important to note that Laetitia had moved to Salt Lake City because of shallow or superficial personal reasons, so the lines, “”Laetitia turned off the set and said she was going to Salt Lake City, that life around here was too boring”.

(King) One easily notices that the purpose of Laetitia’s moving out of the Blackfoot reserve was to explore greener pastures in terms of job opportunities and a more exciting environment in the City.

Other than this, it is also important to note that her mother wanted to see the world, despite her Blackfoot heritage.

This is clear in the Laetitia’s lines “[Mother] is just angry because [she] wants to see the world. ” (King) So, with this knowledge in mind, Laetitia decides to offer her mother the opportunity to do so, as she states, ““[She] can go and come as [she] pleases. ” (King) ; but to add to this, she also initially foreshadows the upcoming conflict by stating that her father is American, in the lines, “Dad’s American.

” (King) In effect, there are two forces at work here that are considered the underlying forces for the trip across the border; these are the desire of the mother to visit her daughter and the submission of the daughter to this desire. Other than this, one finds the implication towards citizenship and not towards identity as Laetitia specifically states the citizenship of her father which will, in truth and in fact, enable her mother to cross the border as she pleases. So, while this is the context in which the travel occurs, such simply serves as the backdrop for the conflict.

Now, despite, feeling giddy about visiting her daughter, the mother goes on a journey that later reveals the difference between identity and citizenship. Upon reaching the border, Laetitia’s mother is confronted by the guard who asks for her origin and destination, to this she replies, “Standoff” (King) and to which the guard respectfully responds, ““I know and I’d be proud of being Blackfoot if I were Blackfoot. But you have to be American or Canadian. ” (King) “Blackfeet Indians are original residents of the northern Plains, particularly Montana, Idaho, and Alberta, Canada.

” (Reddish and Lewis) Of course, the guard turns them away and refuses to let them through. The following day the mother and son tandem return to the border and go through the same motions, this time they are let through. Nevertheless, beyond the superficial gesture of ‘letting them through’ the actions of the guard are done in submission to the reality asserted by the protagonist; that while being American and Canadian will determine citizenship, it will not determine identity.

The mother asserted her culture as a manifestation of her affiliation to identity and refused to identify herself as either American or Canadian. Therefore, she draws on her heritage instead of her political affiliations which she believes is a concept that falls short in creating or ascribing identity. Of course, the initial consequence is that they are not allowed to go through the first time, but other than this, there are deeper consequences as to the refusal of the mother to identify herself as either American or Canadian.

On the outset, the refusal implies the mother’s traditional values in that she subscribes to the principle of heritage instead of politics – remember that the border is a political concept and was created to control cultural and traditional assertions. Another significance of this refusal is her recognition of the persona that her heritage has created; that she does not ascribe her identity to political boundaries but to the deeper concept of ancestry. So, consequently, the mother realizes that she does not belong in the big city and should be better off back home.

King, Thomas. “Borders. ” (the title of your book). (city of publication): (the name of the publisher), (the year your book was published). (page numbers). 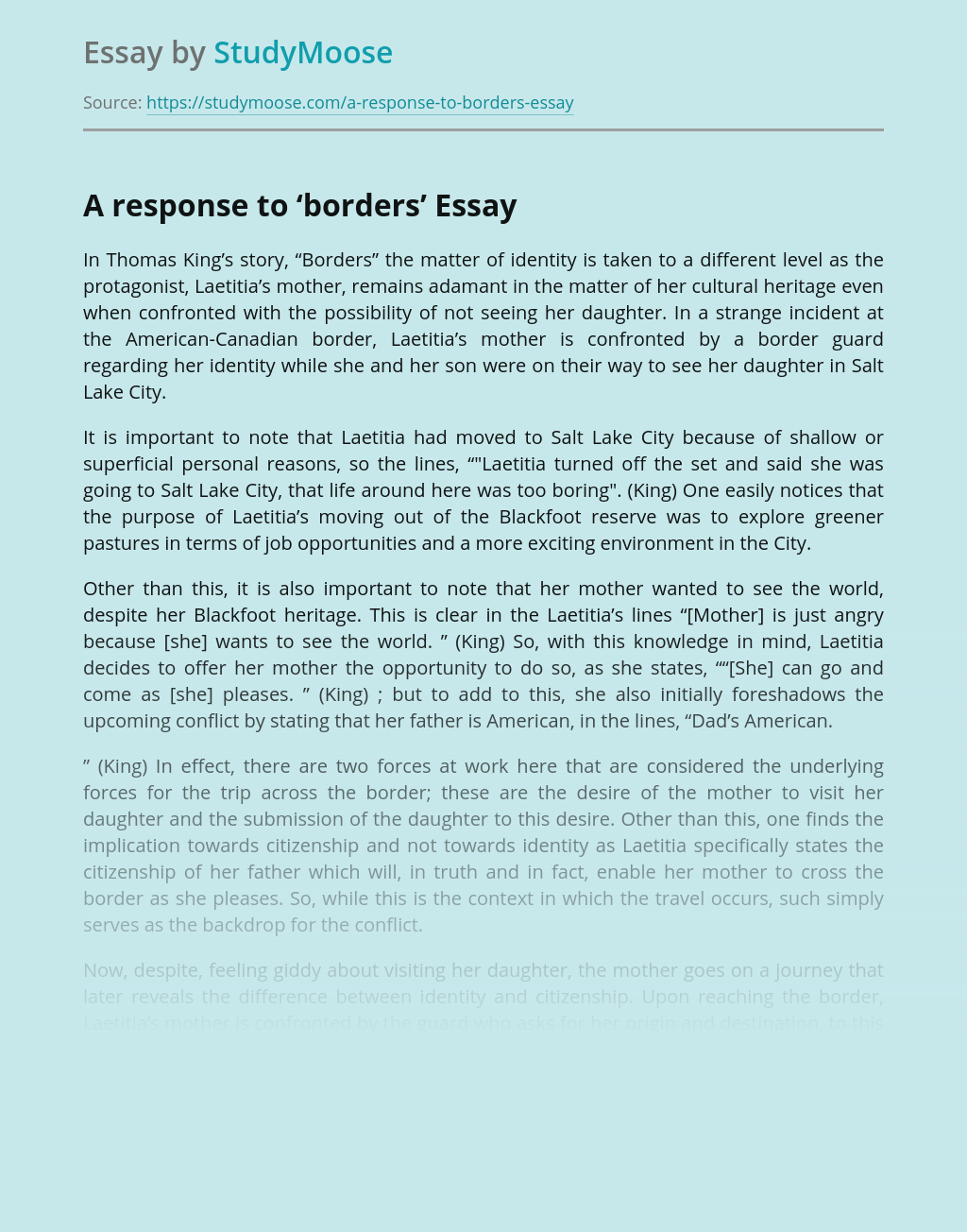 Don’t waste time
Get a verified writer to help you with “Borders” by Thomas King
Hire verified writer
$35.80 for a 2-page paper
Stay Safe, Stay Original