Based on the “Billy Beane: Changing the Game” case, explain how and why the Oakland A’s economic situation after 1995 shaped its:

In the world of major league baseball, Oaklands A’s defied the laws of baseball economics. The team spent only $34 million (the 2nd lowest payroll) had won 102 games and lost only 60 in 2001. On top of this, they finished first in their division and made the playoffs. Major baseball teams would hire high school players than college players.

Turn in your highest-quality paper
Get a qualified writer to help you with
“ Baseball Training Strategies ”
Get high-quality paper
NEW! AI matching with writer

This made high school players costly. Oaklands A’s strategy is to hire College players to save on resources. They argued that college players have already gained substantial exposure and competition. Beane would recruit new drafts and sign them for less than the going rate. Because of budget constraints, Oaklands A’s had to trade its top pitchers in exchange with the younger, much less expensive pitchers to try to remain within budget. Another interesting case for Oaklands A’s is the recruitment of Scott Hatteberg.

Hatteberg played six years with the Boston Red Sox. He got injured and lacked the prowess in throwing the ball effectively. He was, according to Boston Red Sox, a lame player and did not sign him up again.

With this, Hattenberg’s monetary value diminished and that is why Oaklands A’s recruited him at a much lower salary (because there are no other takers). Unknown to the other baseball teams, Hattenberg is the missing puzzle in A’s team. Oaklands A’s noted that Hattenberg has an uncanny knack for getting on-base.

Sabermetrics is a systematic, statistical approach in evaluating teams and players. Based on this science it was found out that the basis for judging the performance of the player should on-base percentage. A’s recruitment would prioritize college players than high school players. This is due to the fact that college players have already played more games against better competition. Bean is convince with the fact that “a young player is not what he looks like, or what he might become, but what he has done. The bottomline is what the player has produced in college. Bean and DePodesta believed that they could forecast future performance of college players more effectively than high school ones. Another staffing strategy is the case of Scott Hatteberg. Hatteberg plays with the Boston Rex Sox. He was injured and was never signed up by Sox. Oaklands A’s did not waste time and hired Hatteberged. A’s has done this because Hatterberg’s has an on-base scoring record. According to A’s, Hatteberg filled up what is missing in the team.

Batting average was the norm adopted by other baseball teams. But training for Oakland was focused on the player’s ability to obtain on-base scoring. The team relied more on selecting players by their on-base percentages. According to Sabermetrics model, teams always win with players having attained high on-base percentages. Oakland’s Training and development strategies embraced on-base percentage as a philosophy for the entire Oakland organization. This system was the star. Each minor league team in the Oakland system began to lead it league in walks, and resulted to higher on-base percentage.

Explain how the compensation, staffing, and training strategies were aligned or integrated with each other to create an overall HR strategy for the Oakland A’s organization

One potential problem is that team players get older as baseball seasons come and go. This is due to the fact that Oakland A’s strategy is to hire college player. They are much older than the high school players hire by other baseball teams. This will affect their performance in future baseball games. On-base sabermetrics technology was developed by Oakland A’s to counter the cost of hiring players and to correct the market value of players. Replicating this strategy by other teams would create another imbalance in the demand for players. Everybody would be replicating what A’s had done and the repercussion is that college players would be costly to hire. Players with low batting average but possess substantial on-base average would be in demand and therefore hike their hiring costs. Oakland A’s could have prevented this had the idea been patented for their exclusive use. 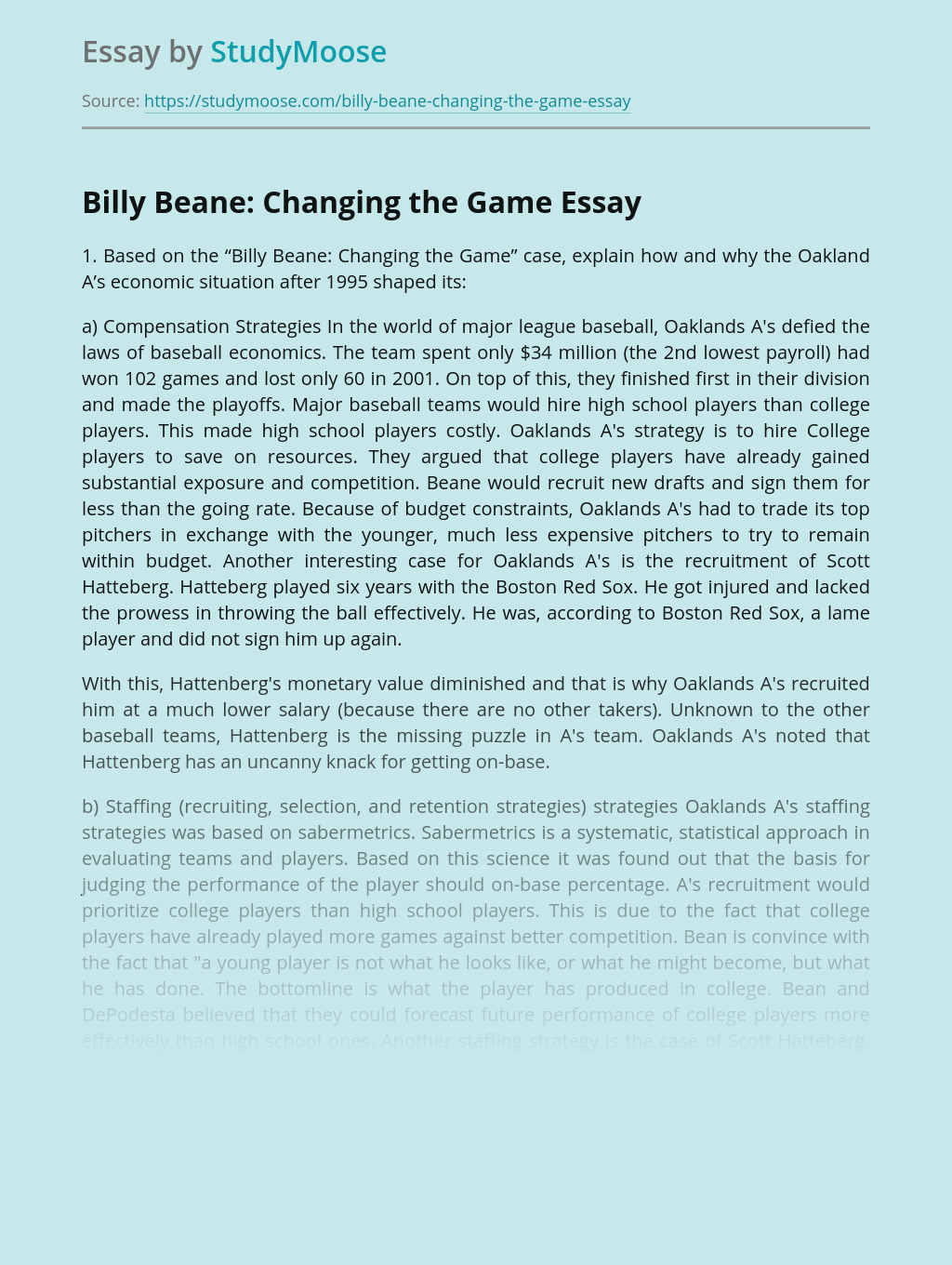 Turn in your highest-quality paper
Get a qualified writer to help you with
“ Baseball Training Strategies ”
Get high-quality paper
Helping students since 2015
Stay Safe, Stay Original