Interpersonal Conflict in the Film Spanglish

The film Spanglish portrays many examples of interpersonal conflict between characters. An interpersonal conflict is two or more persons having different views on a specific thought or idea. In the film one of the most noticeable conflicts occurs between Flor, the house keeper, and Deborah, the mother. The movie is based on the struggles of relationships, with others and with the characters within themselves. Flor’s personality and parenting beliefs conflict with Deborah’s, resulting in a personal and cultural minimal battle.

Don't use plagiarized sources. Get your custom essay on
“ Interpersonal Conflict in the Film Spanglish ”
Get custom paper
NEW! smart matching with writer

The conflict between Deborah and Flor progress over time because Deborah is uptight and her irrational behavior is often upsetting both households. Flor speaks very little English when she starts to work for the Clasky family as their housekeeper on a daily basis. She does not mention that she has a daughter, named Cristina. The family has two children, George and Bernice, the famous chef father John, the alcoholic grandmother Evelyn, and the neurotic mother Deborah. Summer comes and Flor is needed at the Claskys’ summer home around the clock so Deborah asks her to live there with them.

Unable to communicate well in English, Deborah finds a neighbor to interpret, Flor reveals that she is unable to maintain these hours because she has a daughter, so Cristina is invited to come stay with them. While living in their new home for the summer with the Clasky’s, Cristina interprets for her mother to communicate. She impresses Deborah, who begins to treat her like a daughter, taking Cristina shopping, getting her hair done, enrolling her in a private school, and showing her more love than she shows for her own daughter Bernice.

Flor becomes unhappy when it appears that Cristina is influenced by Deborah, in part because she wants Cristina to keep in touch with her Mexican roots and working-class values, and partly because Deborah is overstepping her bounds. Flor objects to Deborah’s actions to John, who apologizes and explains to his wife that she cannot do these things for some one else’s child without permission. Flor begins to learn English so she can communicate better. She becomes closer to John, who is having difficulty with Deborah’s self-centered behavior.

Flor quits and takes her daughter home, upsetting Cristina, who got along well with the Claskys. On their way home, she tells Cristina that she can’t go to the private school anymore either, upsetting Cristina even more; she screams in the middle of the street that Flor can’t do this to her and that her life is ruined. Flor loses patience with Cristina after she asks her mother for space.

Flor explains to her daughter that she must answer the most important question of her life, at a very young age: “Is what you want for yourself to become someone very different than me? Cristina considers this on their bus ride home, and they make up and embrace. The film ends with Cristina as an adult, years later, acknowledging that her life rests firmly and happily on the simple fact that she is her mother’s daughter. Throughout the movie there are many examples of how different cultures have different values, and different people have different morals and ethics, and how two people can clash and have extreme conflict between them, to the point where it can affect others around them.

The movie Spanglish is based on the struggles of relationships, with others and the characters within themselves. Flor’s personality and parenting beliefs conflict with Deborah’s, resulting in a personal and cultural minimal battle. One of the most important reasons for engaging in interpersonal communication is to form and maintain relationships, connections, or associations with other people in your life (Sole, 2011).

Interpersonal Conflict in the Film Spanglish. (2016, Sep 21). Retrieved from https://studymoose.com/interpersonal-conflict-in-the-film-spanglish-essay 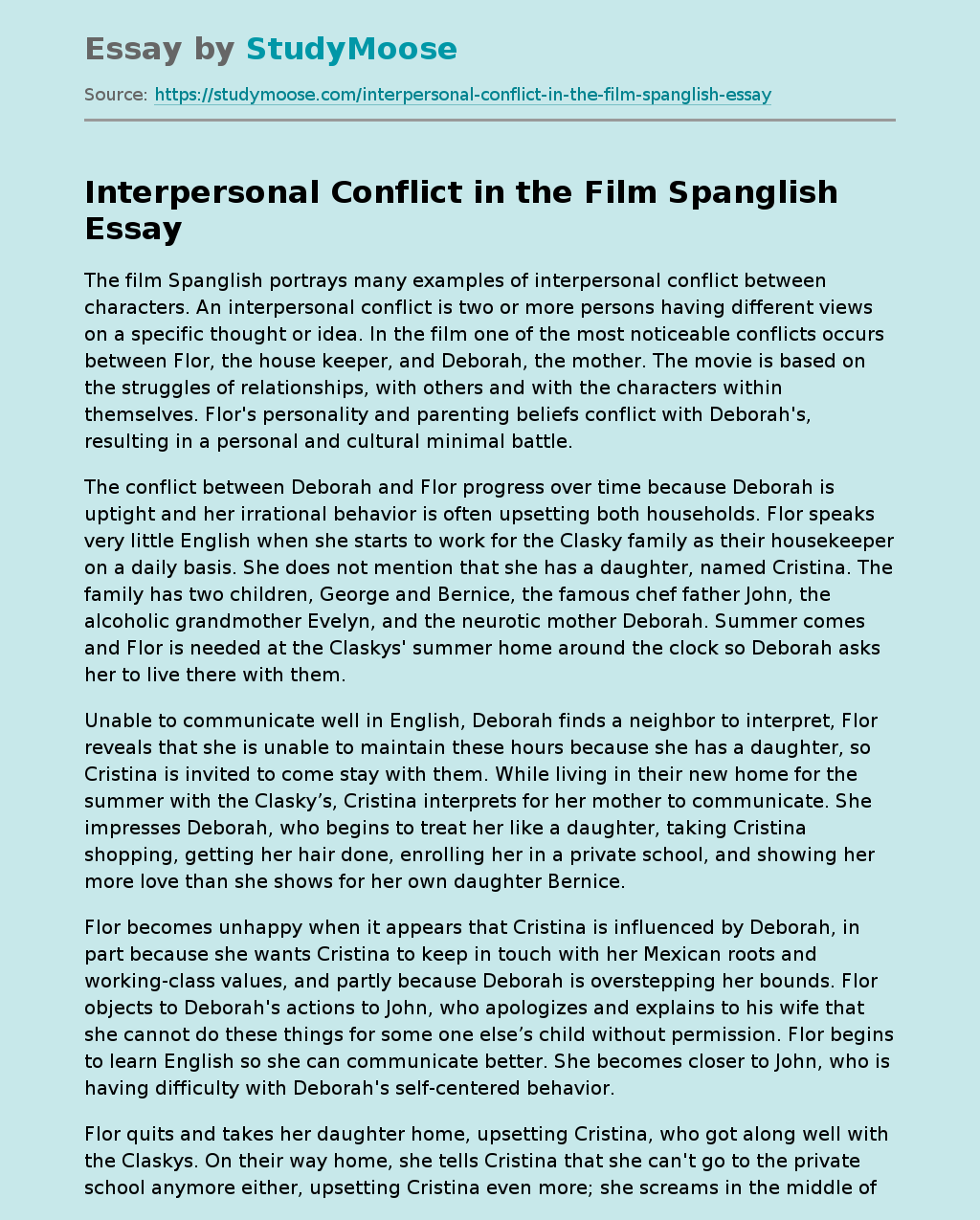