Charlotte’s Web by E.B. White is a children’s novel that tries to instill the values of friendship, loyalty and basic characteristics of humans through an adventure of farm animals. This novel was written in the early 1950’s at the time when the world was split by a curtain in two. It is open and direct in topics dealing with traits of certain animals and their role in the society of the “barn”, but one cannot disconcert the subtle praise this novel gives to the society that this novel is encompassed by.

Don't use plagiarized sources. Get your custom essay on
“ Charlotte’s Web: Allegory of the Barn ”
Get custom paper
NEW! smart matching with writer

Charlotte’s Web contains re-occurring imagery, which implies that the society in which the characters live in is bountiful and that farm life is relatively easy, and brings the promise of simple but fruitful life. This novel, although intended for children, carries with it a strong ideological undertone that glorifies capitalism. This is not meant to be subversive in any way but rather it is a sign of the times that the author lived in and the strong forces that drove the American society when this novel was written.

The author indulges the reader with abundance of images that present the reader with the notion that the life in the country is effortless and that everyone is relatively well to do. The most prominent method used is the rather descriptive manner in which Mr. White describes the vehicles that are parked in front of Mr.Zuckermans barn. The author does not describe the vehicles merely as numerous but he goes on to name nine specific makes present ” Fords and Chevvies and Buick roadmasters and GMC pickups and Plymoths and Studebakers and packards and De Sotos with gyromatic transmissions and Oldsmobiles with rocket engines and Jeep station wagons and Pontiacs”(83/84).

He also goes on to describe some of the most prominent features of these vehicles almost to the point where a reader is compelled to feel pride in the fact that one can choose between so many vehicles if one chooses. It may be argued that these descriptions are made so specific in order to indulge the imagination of a child reading this novel. A valid argument can be made that Mr. White consciously or subconsciously introduced this descriptive element to praise and embellish the success of the life that he considers to be rural. One has to stress that any notions of this imagery being used consciously is very unlikely simply because public and open displays in literature were not uncommon at this time and there would be no reason for the author to be this subtle consciously.

Another re-occurring image that is the most prominent symbol of Capitalism is not referred to often in this novel but is referred to nevertheless. Money is not something that the author uses here as a force that in some subtle way drives the story of the novel. That is to say, greed is not the force behind the story and monetary references are minor but important when analyzed from a semiotic perspective. Although in Ch II Wilbur is sold it is not specific for how much, but latter on in the story the author describes the abundance of goods at the fair and the freedom the kids enjoy when they get there. Most receive money from their parents and are free to do whatever they wish with the allowance they have received.

The significance of this is that, beside of this being a step in maturity of the characters involved, the amount that is dispensed by the adults to Fern and Avery is fairly descriptive again. “Mr. Arable gave Fern two quarters and two dimes. He gave Avery five dimes and four nickels”(131). This type of descriptive imagery is repeated once more when Mr. Zuckerman receives the prize for Wilbur and the author once more tells us “He [the judge] handed Mr. Zuckerman two ten dollar bills and a five dollar bill”(160). It’s fairly uncommon to be descriptive about money in this manner in children’s novels and one can only assume the meaning and the context in which this was written in.

The Fair is another vehicle that is used to emphasize the excess that children indulge themselves to once a year. The author is fairly descriptive as to what one can find at the fair. This is surely done to justify the excitement that Avery and Fern display when they are finally “released” upon the fair. E.B. White is also descriptive as to what Tempelton can find at the fair. The wasted food is plentiful and at one point Tempelton himself said how he “[I] must have eaten the remains of thirty lunches” (148). This laid-back mention of the food that is wasted again brings about the notion of excess, which is the heart of the argument against Capitalism. Food is a re-occurring image that is used to display the excess the people live in E.B.Whites novel. Wilbur being dirty, because he is a pig, is washed by Mr. Zuckerman’s farm hand Lurvy with buttermilk. This is not the only instance where food is the symbol of excess. Wilbur’s diet is also detailed in Charlotte’s Web.

The author goes on to say that Wilbur is fed with “skim milk, wheat middlings, leftover pancakes, half a doughnut, the rind of a summer squash, two pieces of stale toast, a third of a gingersnap, a fish tail, one orange peel, several noodles form a noodle soup, scum off a cup of coca, an ancient jelly roll, a strip of paper from the lining of the garbage pail, and a spoonful of raspberry jelly”(75). Admittedly paper from a garbage pail, stale toast and a orange peel is not something one can envy Wilbur on but jelly and pancakes and skim milk is definitely something one can look forward to. This food that is being described to the reader is meant to show the reader that Wilbur is being treated and fed good even though he is a pig. But one cannot help but wonder, while reading this passage, why this food is wasted and is life on a farm that good and that rewarding that one can afford to feed farm animals with leftover desserts and lunches and dinners.

The fair brings about a plethora of images that one can associate with the theme of this paper. Even though the fair is associated mostly with the younger generations we also see that both Mr. and Mrs. Zuckerman also have things that interest them. Mr. Zuckerman wishes to see the tractors on display and Mrs. Zuckerman expresses the wish to see the “deep freeze”(133). These symbols are typical examples of a consumer driven society.

Although the argument of W.E Whites subtle praises of the American way of life has been made. The author of this paper did not contrast the world of Mr. White to that of Communism but rather to a normal farm in rural America in 1950’s. It is important to understand that novels carrying any message of the society is written in is a very powerful tool. Plato’s allegory of the cave would successfully back the argument that this novel is but a puppet projecting its image on a wall and that the reader is a chained subject viewing the images. Certainly it must be made clear that the author most likely did not project these images with any other intent other than making the story more enjoyable.

All of the arguments presented above can be dismissed rather easily if one does not open themselves to the idea that even children’s novels may be tools by which we educate our young ones to more than values and morals. Are we showing our children from a young age that excess and wastefulness of our resources, whether it is food or natural resources, is ok? Or are we simply praising what we have and showing our pride with the fact that we are capable of buying dozens of different brands of vehicles when realistically we only need one. Children need to be taught the value of a hard earned dollar and that food and other resources are not to be wasted so lightly. This novel although innocent does play a small part in subtle miseducation of children about what constitutes real farm life.

Charlotte's Web: Allegory of the Barn. (2016, Jul 01). Retrieved from https://studymoose.com/re-charlottes-web-allegory-of-the-barn-essay 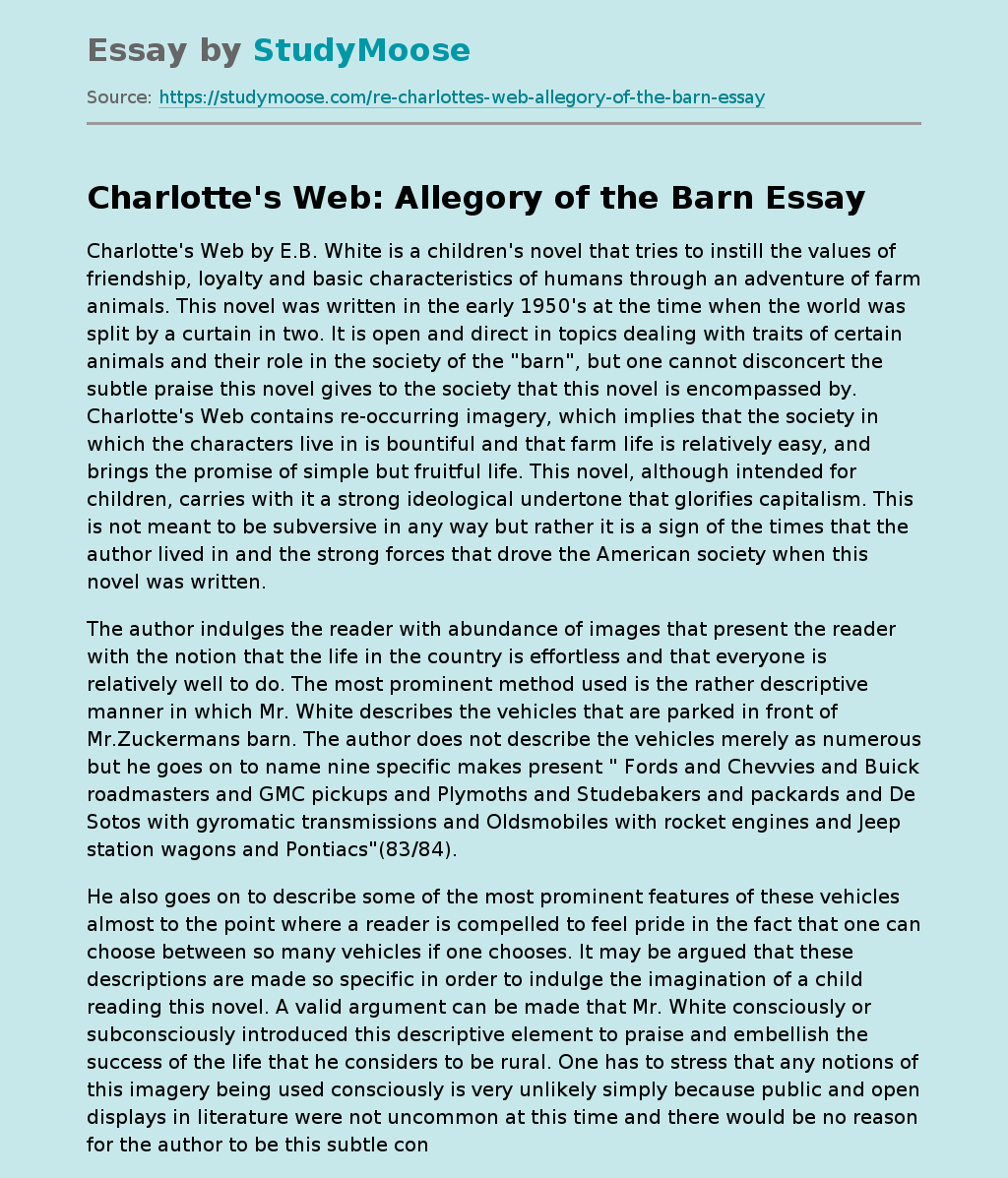