More than sixty years ago, in the summer of 1948, the Indian nation, then newly-born, was struggling for its very survival. India is a unique and unlikely democratic state because it is not constructed according to the classical European principles of “ one language, one religion one common economy” .India contains an enormous diversity in language, religion and culture; and the state is not built on uniform nationalism, but embraces pluralism.

Few Indians now alive know how uncertain our future looked in the summer of 1948.

The question then being asked everywhere was ‘Will India Survive? . Now, sixty-four years down the road, that fearful query has been replaced by a far more hopeful one, namely, ‘Will India Become a Superpower?’.

My vision as a citizen of India would be to make India a superpower, both in economic and military terms. The endeavour to be taken to herald this result would be tremendous and not without pain. One may wonder why India has not achieved this goal yet and what has prevented India from achieving this goal.

Many reasons point back at us the root cause is paved by the citizens themselves. Too much focus is given on social and religious outputs which eventually lead to the election of leaders that are more focused on these aspects rather than on the economy and well-being of the country. On the other side of the coin, India faces more problems like proper infrastructure facilities, low agricultural output, high illiteracy rate and poverty.

Major factors which act as a barrier for India to become super power are.

1. Population: India’s increasing population is a big hindrance in India’s becoming a Super power. Rising population has affected the quality of life of the people for sure as imparting access of basic amenities and education to bigger population becomes more difficult. In the last several decades, fertility control policies in India have failed to promote a sustainable solution to the problem of overpopulation. India needs to take strict measures to counter the prevailing birth rate in the country.

2. Corruption: India is one of the most corrupt countries on the world map. Corruption in India has assumed such large proportions that public have come to believe that it is impossible to get rid of this malaise. We need variety of strategies to fight corruption, ranging from the simplification of rules and procedures and the application of information technology to specific steps such as trapping corrupt public servants. Open and transparent political systems are must at all levels.

4. Naxal and Maoist menace : Extremism in the form of the Naxalite movement has to be checked. Stern and sincere steps should be taken to rein in the menace. Rehabilitation programme has to be launched to bring the Naxalites into the mainstream and at the same time police force should be given modern training and equipments to counter ultras.

5. Social inequality and Unequal distribution of income across society: India needs to address growing unequal income distribution and need to narrow the gap between the poor and rich .The impressive growth rates of the Indian economy reflect the growing industry and commerce. This produces a group of extremely rich people like Mukesh Ambani who recently commissioned a 2 billion 27 story house for his family of five. The rich do not seem to care about the dark side of their wealth. This disparity has only increased over the years. Economic policy makers need to work on this. The present global financial crisis is bound to make matters worse unless long-term structural reforms are adopted.

6. Environmental degradation: The social inequality is destructive nature; rural communities profit little from the economic growth and farmers in the country side are being forced from their land to make way for multinational corporations who exploit the soil and the forests. Economic development without environmental considerations can cause serious environmental damage in turn impairing the quality of life of present and future generations. The degradation is impacting people’s lives in very real ways, whether in the form of massive depletion of underground aquifers, chemical contamination of soil, death of rivers, loss of species etc.

7. Religious extremism : Current trends shows Religious extremism has risen sharply in Indian society and if not taken care of, they have potential to completely destroy the secular and democratic fabric of the nation. Religious riots, communal clashes and bombings in every nook and corner of the country are hindrance in the set up of secular fabric, scientific advancements, technological breakthroughs in the country. Matured democracy and vibrant, fast-growing economy like India have to deal with this issue ASAP.

8. Media Apathy : In India most of the media belongs to the political parties, so they failed to cover all relevant and real issues revolving around our society.The media seem to have given in completely to the wealth and entertainment industry of the higher class. The media are financially dependent on the rich because of advertising and are therefore not critical of the corruption in the public domain and government. Since the 90’s journalists barely have any attention for issues like environment; most of them were retrained to be financial analysts. Media needs to come up with the coverage of real and main issues like social inequality and environment degradations. Media has to play an active role in spreading awareness among masses towards major issues of the society. 9. Political chaos :

In the last two decades no single party has obtained an absolute majority.The political fragmentation across central and regional levels makes it very difficult to forge sustainable long term policies in the realm of health, education, infrastructure etc.Moreover, small parties choose the most profitable ministries for ‘short-term corruption’ .

10. Border conflicts: India’s unresolved border disputes, especially in Kashmir and the North East (Nagaland and Manipur) which indicates that there are parts of India that are not comfortable with being part of India. India needs to take proactive steps to resolve the conflict and fasten the development in these disturbed territories.

I believe that India would make it to the top of the world as Indians are among the most intelligent people of the world. India has all the human and material resources that are prerequisite to become a superpower. It is only question of administration and supervision. The country proudly holds immense resource of experienced, high caliber professionals in all spheres of knowledge and technology. India is deemed as a “sleeping tiger” due to its capabilities in different fields like nuclear technology, space technology, agricultural research and software development. If provided with proper support, they would be able to implement any task that a developed nation may or may not be able to do. 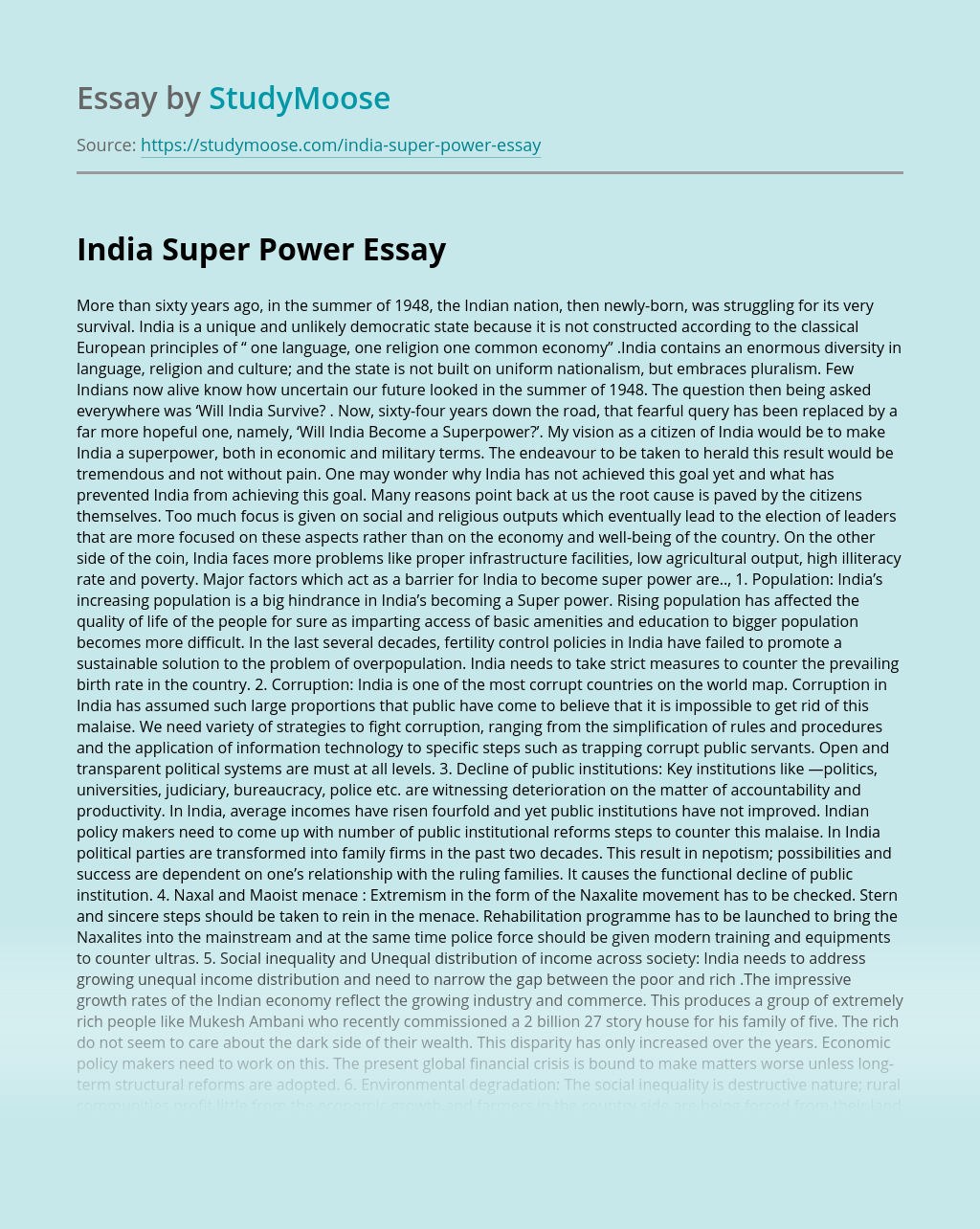