Odysseus: The Qualities of a Hero

“The Odyssey” by Homer is one of the most recognized epics in world literature. It traces the decade-long journey of Odysseus back to Ithaca after he fought in the Trojan War. He was able to survive the dangerous ten-year voyage which he experienced and safely arrive home. Indeed, Odysseus is a truly admirable character, but what what makes him especially laudable is his physical strength, courage, and cunning. One admirable quality which Odysseus possesses is his physical strength. Like all Homeric heroes, Odysseus has remarkable physical strength.

Turn in your highest-quality paper
Get a qualified writer to help you with
“ Odysseus: The Qualities of a Hero ”
Get high-quality paper
NEW! AI matching with writer

In Book 18, he displays such strength even under the disguise of a poor man. Another beggar named Arnaeus, also called Irus, insults Odysseus. Arnaeus challenges Odysseus to a fight and mocks him that he would be easily defeated because he is much older than his opponent. Odysseus truly proves him wrong. Homer writes, “Odysseus smote him on the neck beneath the ear and crushed in the bones, and straightway the red blood ran forth from his mouth” (18.

95). This is proof of Odysseus’ strength; he was able to defeat a man who was younger than him.

While it is true that the goddess Athena did strengthen Odysseus for the fight, he was already physically strong to begin with. Another example of Odysseus’ physical strength can be found in Book 21. In this book, Penelope tells her suitors that she would finally choose the man who could string Odysseus’ bow and shoot an arrow with it as her husband; this arrow should pass through each of 12 axes (21.

74-80). None of the suitors succeed in Penelope’s given task. Odysseus then offers to string the bow which enrages the suitors because they are terrified he might succeed.

Later on, he does justify the fears of his foes. According to Homer, “even as when a man well-skilled in the lyre and in song easily stretches the string about a new peg, making fast at either end the twisted sheep-gut–so without effort did Odysseus string the great bow” (21. 405-410). Thus, once again, Odysseus proves his physical strength. Another distinguishing quality which makes Odysseus admirable is his courage. In Book 10, a goddess places Odysseus’ men in a humiliating situation.

Circe drugs Odysseus’ men and with her wand, she transforms them into pigs and places them in pigsties (10. 235-240). Eurylochus, who was spared from Circe’s magic because he did not enter her home, immediately goes to Odysseus to tell him what happened to his men. Without hesitation, Odysseus takes his sword and bow to confront the goddess. Eurylochus has become terrified by Circe’s power that he refuses to come with Odysseus (10. 265-270). This circumstance is a testament to how courageous Odysseus is.

While he was aware of the danger which he was about to confront, he proceeded to face the challenge without fear. Unlike Eurylochus, Odysseus dared to challenge Circe to save his men. In Book 12, Odysseus also reveals his courage. Circe warns him about two dangers he would encounter in his trip: Scylla and Charybdis. Odysseus asks the goddess, “tell me this thing truly, if in any wise I might escape from fell Charybids, and ward off that other, when she works harm to my comrades? ” (12. 111). Circe answers him, “Rash man, lo, now again thy heart is set on the deeds of war and on toil” (12.

116). The inquiry of Odysseus exposes his courage, for he welcomes a fight between him and two enemies at one time. In addition, he disobeyed Circe’s orders when he wore his armor as his ship approached Scylla. This shows that he was courageous enough to have the intention of fighting the monster. The most admirable quality of Odysseus is his cunning. He proves to be an individual who skillfully uses trickery and deception to further his own ends. Throughout the epic, Odysseus demonstrates his cunning in multiple occasions.

In Book 4, both Menelaus and Helen narrate to Telemachus how cunning his father is. According to Helen, Odysseus is sly enough to consider dressing up as a beggar to enter enemy territory. In an effort to enter Troy without being noticed, he clothes himself in rags and appears to have cuts and bruises. In such disguise, Odysseus deceives the Trojans and successfully enters the city unnoticed (4. 244-245). Menelaus adds that it was also Odysseus who prevented them from leaving the wooden horse when they were obviously being tricked to reveal themselves (4. 284).

In these scenarios, Odysseus was able to contribute to the war effort of the Achaeans through his cunning. However, the most notable example of Odysseus’ cunning is found in Book 9. Odysseus and his men arrive in the land of Cyclops where the son of Poseidon named Polyphemus resides. They slaughter the goats in his land and consume the cheese from his cave. This angers Polyphemus, and he takes them as prisoners inside his cave. Odysseus then devises a clever plan to defeat the creature. First, he makes the monster drunk from the wine he brought from his ships.

As Odysseus pours the wine, Polyphemus asks his name. When Odysseus was sure that Polyphemus was drunk, he responds: “Noman is my name” (9. 366). Polyphemus falls as a result of inebriation; Odysseus and his men immediately take a hot wooden staff in the eye of the monster. Polyphemus screams in pain, getting the attention of the other Cyclops. When they asked Polyphemus what was happening, he replies: “It is Noman is slaying me” (9. 407). The false name Odysseus gave Polyphemus allows him and his men to escape the monster’s lair without being properly identified as the attacker.

This incident is the best proof of how cunning Odysseus is. The protagonist of Homer’s “The Odyssey” is indeed an admirable character. With his physical strength, courage, and cunning, Odysseus has proven himself a true hero after he overcame all the obstacles in his journey. These three qualities make Odysseus a character which readers can look up to. Work Cited Homer. “The Odyssey. ” Perseus Digital Library. Trans. Samuel Butler. 16 June 2009 <http://www. perseus. tufts. edu/cgi-bin/ptext? doc=Perseus%3Atext%3A1999. 01. 0136;query=toc;layout=;loc=9. 360>.

Odysseus: The Qualities of a Hero. (2016, Oct 14). Retrieved from https://studymoose.com/odysseus-the-qualities-of-a-hero-essay 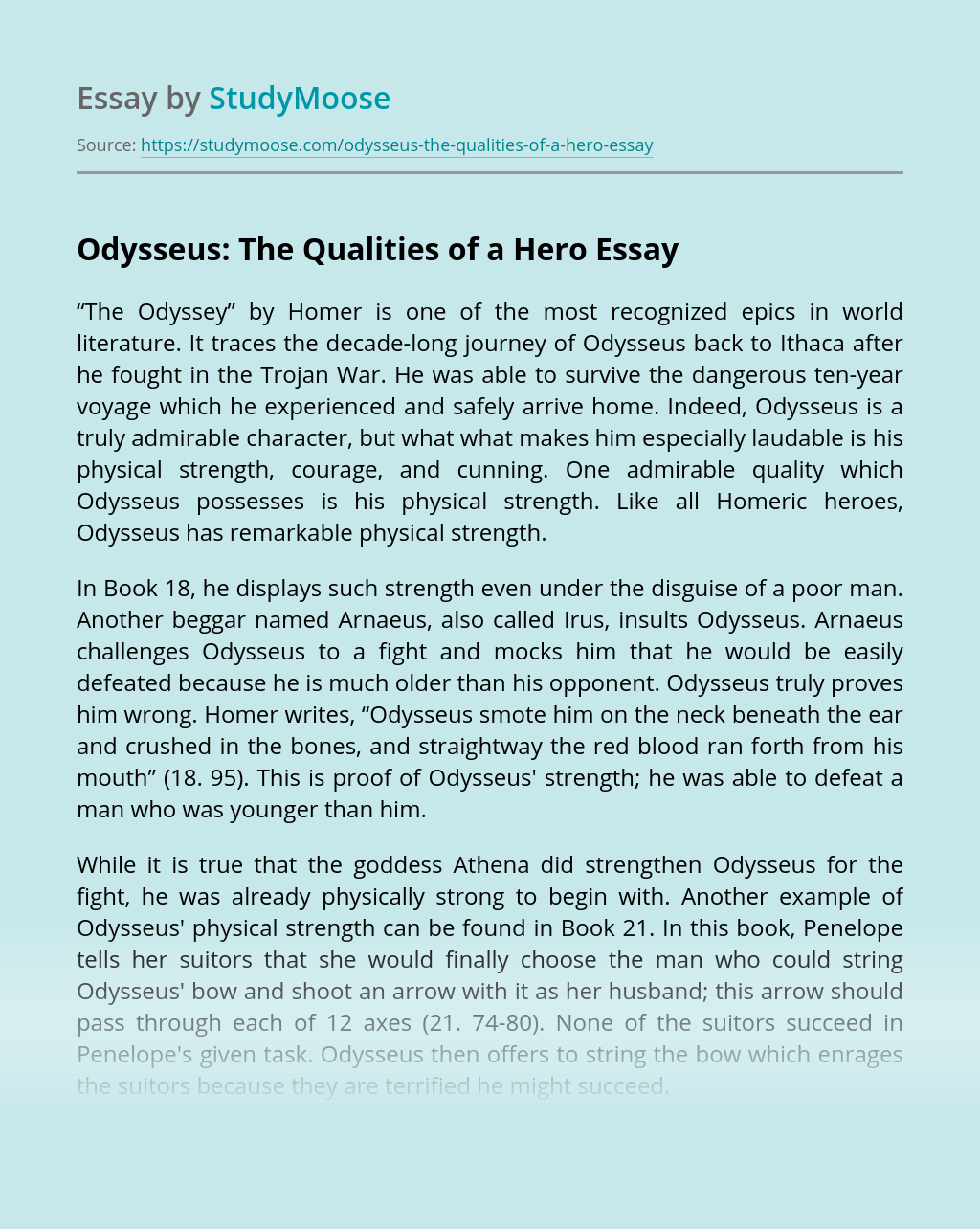 Turn in your highest-quality paper
Get a qualified writer to help you with
“ Odysseus: The Qualities of a Hero ”
Get high-quality paper
Helping students since 2015
Stay Safe, Stay Original