Odysseus is a Hero to Nobody

The Odyssey is an epic poem that was originally a verbally told story from the 8th century. It was later written into 24 books. It is a story about Odysseus and his journey home from the Trojan War. A hero is someone who is loyal, focused on goals, honest, and selfless. Odysseus doesn’t fit into any of those categories. Even though Odysseus is courageous, he is not a hero. He is unloyal, not honest, only has his best interests in mind.

Don't use plagiarized sources. Get your custom essay on
“ Odysseus is a Hero to Nobody ”
Get custom paper
NEW! smart matching with writer

Overall he is just selfish. Odysseus is unloyal to his wife, Penelope, and son, Telemachus. Odysseus was extremely unloyal to his crewmates, Telemachus, and Penelope during his journey back from the Trojan war. In this quote from book 10 pages 922, it explains how Odysseus was unfaithful to his wife and son by sleeping with another woman, “She swore at once, outright, as I demanded, and after she had sworn, and bounded herself, I entered Circe’s flawless bed of love.”

A hero should be focused on his goal, and should be honest; Odysseus was not at all.

In book 12, lines 143-150 Odysseus was talking to his crewmates, he said, “Saying gently, have we never been in danger before this? More fearsome, is now, than when the Cyclops penned us in his cave? What power he had! Did I not keep my nerve, and use my wits to find a way out for us? Now I say by hook or crook this peril too shall be/ something that we remember. Heads up, lads! We must obey the orders as I give them.

” Odysseus told his crewmates that they needed to have the strength to keep going, and if they didn’t keep going it would eventually result in not making it back home to Ithaca or death which everyone died except Odysseus in the end. He was telling them that they need to do as he says or they would face consequences. He is also saying he is the greatest leader because he led them through everything and they had already made it this far. Circe told Odysseus not to go against the gods because they were extremely powerful and she knew if Odysseus disobeyed the gods he wouldn’t survive or make it back home to Ithaca. Odysseus let his pride and bad habits get in the way of listening to the gods, and got his men killed because they followed his orders.

Odysseus is not honest, he lied to his men, Telemachus, and Penelope to cover up his own mistakes. “Do not rage at me, Odysseus! No one ever matched your caution! Think what difficulty the god gave: they denied our lives together in our prime and flowering years, kept us from crossing into age together. Forgive me, don’t be angry. I could not welcome you with a lobe on sight! I armed myself long ago against the frauds of men, imposters who might come-”. ( That quote was from Book 23 lines 417-427. When Odysseus got home, and Penelope heard about his return she didn’t know if it was really him. He had finally proved to her that it was him, and she was so happy because her husband Odysseus was finally home. He was upset with her that she didn’t recognize him and Penelope apologized a lot repeatedly. He let her apologize more than once, and never even mentioned his unloyal acts while he was returning on his way home to Ithaca, for instance with Circe. He never told Penelope about sleeping with her Circe in her “Bed of love” and stayed how he on her island for a year and didn’t tell Penelope, which makes him dishonest.

Other people may believe that Odysseus is a hero. They might see his adventurous acts as courageous, they might find good reason ing s for his bad actions. “I drove them, all three wailings, to the ships, tied them down under their rowing benches” (Book 9 lines 48-49). Odysseus is keeping pt all of the men on task, lead ing them, and taking ook charge, he is explaining that he kept them wailing, to the ships and tied them under their rowing benches. . This could have been en viewed as him being good, as he had is keeping pt his men to the task, for the outcome of getting back to Ithaca. He is being a good leader, but he is leading them into danger and is thinking ought about a better outcome for himself rather than him and his men while leading.

Odysseus does not fit into the category of being a hero , . He doesn’t have the traits of a hero. He is unloyal to so many people, he’s selfish, and he is extremely dishonest to people throughout all the books, and he just isn’t a good person throughout the series. Heroes are important in today’s society, f because they are great role models. Younger audiences need someone to look up to and, admire and to aspire to do good things and to try to be a good person like them. We learned that prideful acts could be taken as selfish acts or as good leadership acts.

Odysseus is a Hero to Nobody. (2020, Oct 01). Retrieved from http://studymoose.com/odysseus-is-a-hero-to-nobody-essay 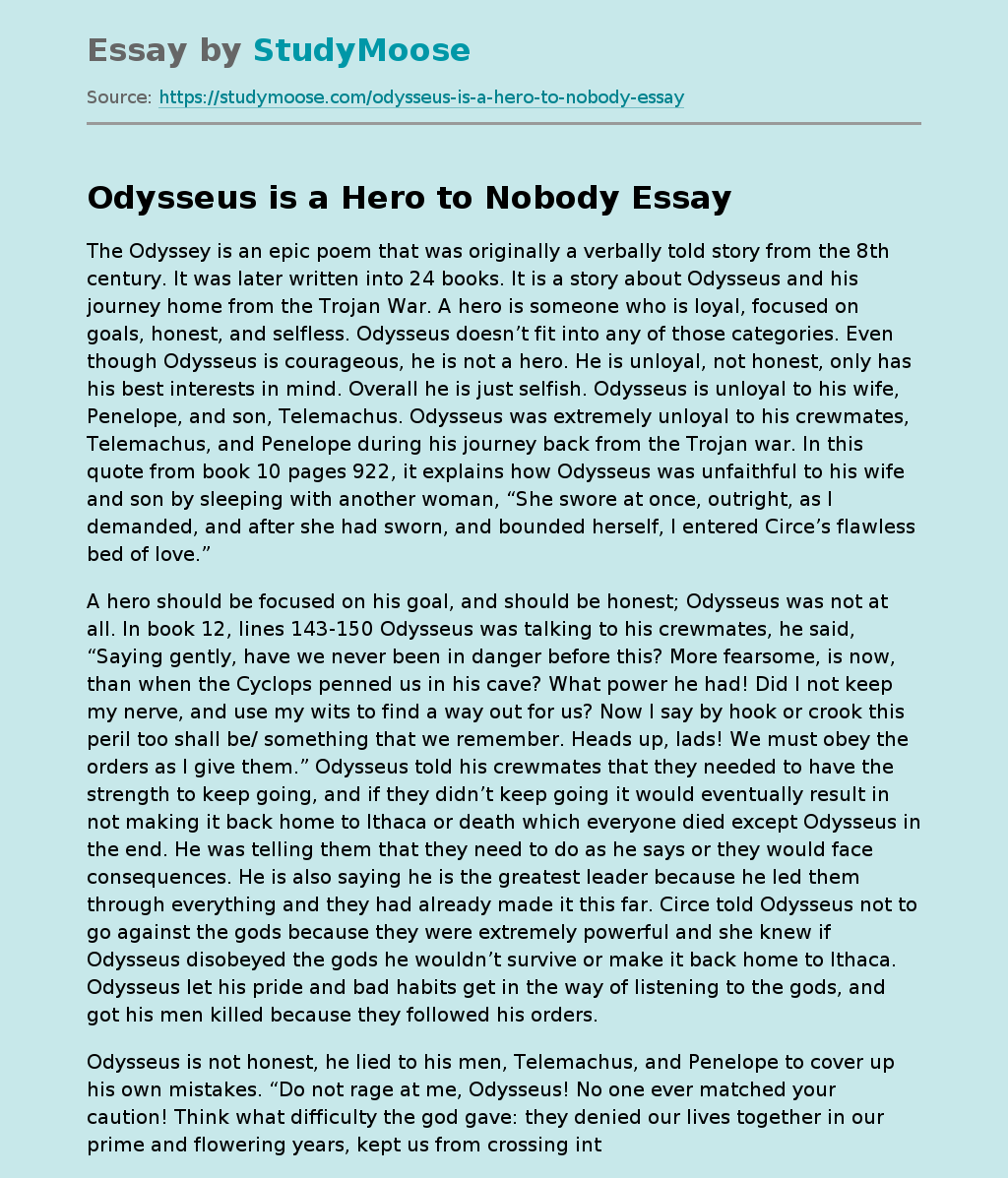