What Are Some Qualities of a Romantic Hero?

Don't use plagiarized sources. Get your custom essay on
“ What Are Some Qualities of a Romantic Hero? ”
Get custom paper
NEW! smart matching with writer

You must not want to conform with society at all, you would want to break off and make your own rules. You isolate yourself and do not want to be around people, romantic heroes love nature which is a prime example of isolating themselves so that they can be alone with it and admire it.

Lastly, you are haunted by something of your past that you are either shamed of or are scared of.

Walt Whitman is known for being one of the most well-known romantic hero with his writings. His most famous writings are in a book called Leaves of Gras. He wrote different versions of that book. His book has many different poems in it Walt wrote his books during the romantic period.

In his book he is mostly addressing the people of the U.S., he told them to try and be more generous in spirit. Many famous protagonists ideas came out of the romantic period. For example one of the most well-known superheroes Batman otherwise known as “The Dark Knight.” Batman is a perfect example of a romantic hero because growing up as a young millionaire with his parents young Bruce Wayne’s parents were shot and murdered outside of a theater. Bruce since after that fateful event isolated himself and did not conform with society at all.

Bruce shut himself away until his mid-twenties. Bruce also was sacred of bats growing up because he fell in a well at one time and bats circled around him and attacked him. Bruce took both of those moments when growing up and embraced himself making him into the superhero we call batman today. He took the haunted by the past because of his parents’ death by murder and it made him want to fight crime. Then he took the scared of bats and embraced his fear and became batman Another famous example is the main charter in the “Star Wars” movies. Luke Skywalker hidden in isolation for protection from his father Darth Vader who is trying to get rid of him. Luke lives on a planet full of thief’s and crime lords, but Luke does not fall into that lifestyle. Instead, he wants to go fight for the republic. Later in the movie, Luke’s aunt and uncle are killed by the empire while in the hunt for him. Luke then goes and finds this old man who is protecting him named Obi-wan Kenobi who helps Luke take his anger of his aunt and uncle’s death and Luks passion for getting rid of crime and turns him into one of the most powerful Jedi’s ever.

Indiana Jones is an archeologist who loves to go explore the world and its ancient ruins, with Jones picking this profession it shows to him that he is one with nature and that he loves to admire it because he is always traveling or exploring. He is in his mid-thirties. Which might seem very old to be considered to be a romantic hero but when he is with all of his other friends and people that are helping him he acts like he is in his early twenty’s, he is always trying to find new ways to do things or opening the audiences eyes to new things. Also anything Jones finds something new or something of value he wants to put it in a museum and not keep it from himself he wants the world to see, and it not in it for just personal gain.

What Are Some Qualities of a Romantic Hero?. (2020, Sep 06). Retrieved from https://studymoose.com/what-are-some-qualities-of-a-romantic-hero-essay 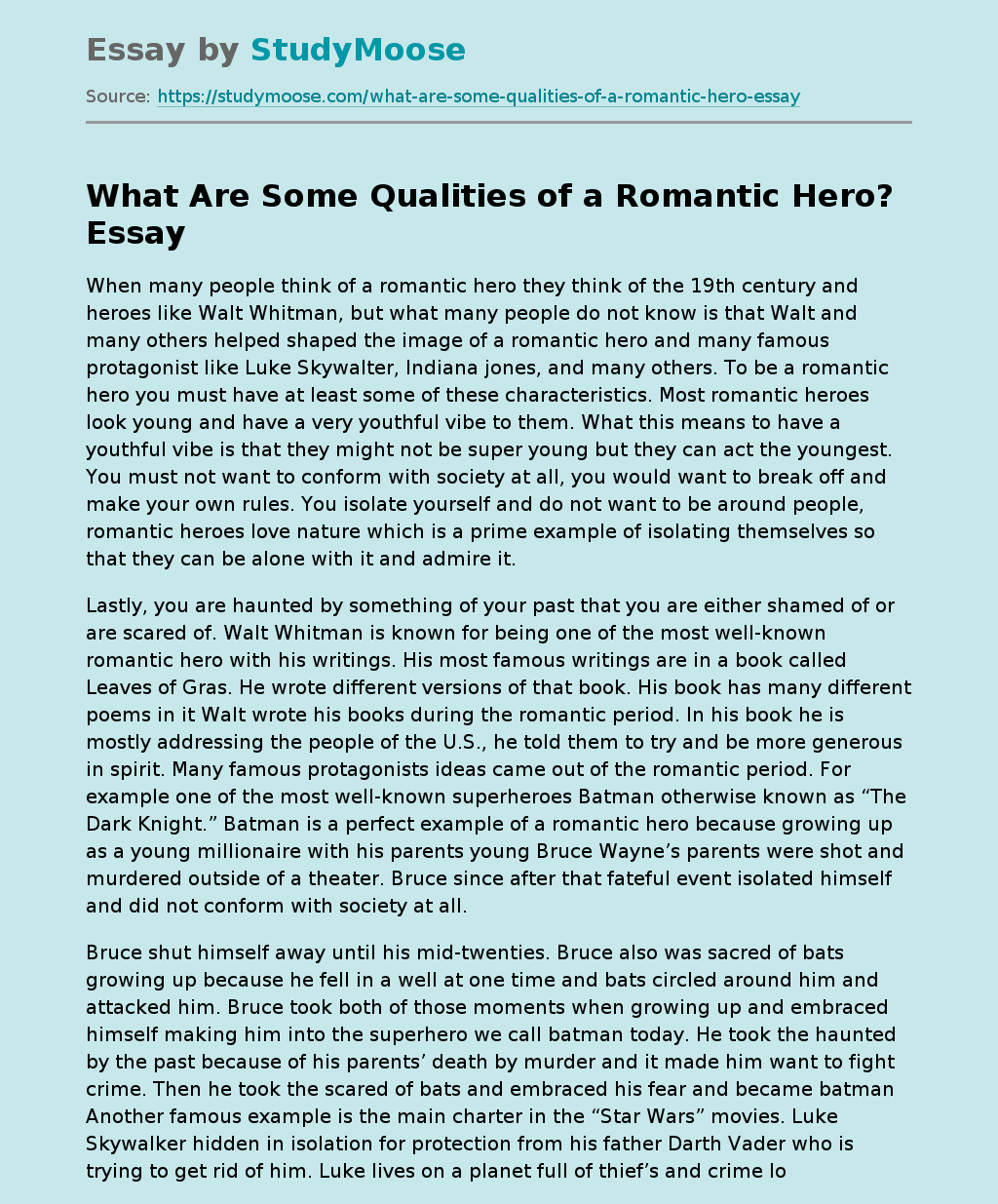