It is the intent of this paper to introduce the relatively recent theories of dark matter and dark energy and their relation to each other. These theories explain the observed increase in expansion rate of the Universe as well as explain why galaxies remain intact despite the apparent lack of sufficient mass to affect the gravitational forces needed for cohesion, especially when considering that galaxies rotate at speeds that should disperse their stellar composition away from its core.

Dark Matter Dark Introduction Our understanding of the Universe is ever evolving as new discoveries are made, challenging what we have always believed.

Don't use plagiarized sources. Get your custom essay on
“ Dark Matter and Dark Energy ”
Get custom paper
NEW! smart matching with writer

Some struggle to grasp an explanation of those new discoveries and the phenomena presented. These new discoveries are made possible with the advancement of new technologies and capabilities. The advent of powerful radio telescopes and imaging telescopes like the Hubble Space Telescope that allows one to observe the cosmos with much more fidelity. Two recent theories to explain what comprises our universe that have taken shape are the presence of dark matter and dark energy.

In 1933 Fritz Zwicky, an astrophysicist, was studying the Coma Cluster of Galaxies in which he determined that even though the galaxies were bound by gravity, those galaxies were moving too fast to keep the cluster from breaking up, but in contrast, they were not (Hooper, 2013). The determination was further strengthened by the observations of Vera Ruben and Kent Ford on galaxy rotations (Hooper, 2013). The only explanation Zwicky could come up with is that the galaxies contained more mass in the form of invisible matter, which scientists now refer to as dark matter.

It was not until the 1970’s when scientists, with the aid of computer simulations, conceptualized that our galaxy did not contain enough mass to keep everything in place (Hooper, 2013). Rotation should generate disintegration, shedding stars and gas in every direction (Panek, 2010). Dark matter is not directly detectable since it seemingly does not interact with normal matter except through gravity (Panek, 2010). Though dark matter is not detectable, we can observe its influences to realize it exists.

It is through gravitational lensing that scientists have an idea of the quantity and distribution of dark matter within the Universe. To answer the question of what is dark matter scientists have considered the idea of: (a) black holes; (b) Massive Compact Halo Objects (MACHOs) composed of baryonic matter which emit little to no radiation; (c) brown stars which are bodies of mass too low to sustain hydrogen fusion but massive enough to bend light; and (d) particles (Rishwanm, 2008).

Considering the amount of mass involved, black holes, brown stars, and MACHOs would be unlikely to meet the quantitative criteria for the amount of dark matter in existence (Rishwanm, 2008). According to a NASA sponsored website, a favored model for dark matter is that it is “mostly composed of exotic particles formed when the Universe was a fraction of a second old” (NASA, 2012, p. 1). Some particles considered are neutrinos, axions, and Weakly Interacting Massive Particles (WIMPs). The current and most popular theories amongst astrophysicists to explain what dark matter is made up of are WIMPs and axions.

Caldwell and Kamionkowski (2009) stated, “Among the candidates that have withstood long-standing theoretical scrutiny are WIMPs and axions. WIMPs, like neutrinos, interact only weakly with ordinary matter. They arise naturally in extensions to the standard model of particle physics” (p. 587). The Role Dark Matter Plays Galaxies rotate at speeds that are too fast to keep their stars rotating around its center without breaking off in a new direction or slowing down based on the amount of visible or luminous mass within the galaxy (“Dark Energy, Dark Matter,” 2012).

American theoretical physicist Kaku Michino explained in a series called The Dark Matter & Dark Energy, that dark matter surrounds the galaxies in a halo keeping the rotation speeds of the galaxies constant thus giving the galaxies mass (Rishwanm, 2008). The overall effect of dark matter is that it provides an attraction force on a galactic scale adding mass and therefore adding gravity to the center of those galaxies. Dark Energy Conceptualized

Their references for the measurements were a number of supernovas, or exploding stars, because they are bright and relatively short lived. “They knew how bright the supernovas should appear at different points across the Universe if the rate of expansion were uniform. By comparing how much brighter the supernovas actually did appear, astronomers figured they could determine how much the expansion of the Universe was slowing down” (Panek, 2010, p. 2). The astounding discovery that the expansion was speeding up implied that gravity was not the dominant force in the evolution of the Universe (Panek, 2010).

The newly discovered mysterious force was given the name of dark energy by one of the astronomers. Ironically, it was in 1917 that physicist Albert Einstein introduces the idea of a cosmological constant to “produce static, eternal solutions to his field equations, in accord with the view that the Milky Way was the entire Universe and the observational fact that the motions of its stars showed no systematic expansion or contraction” (Kirshner, 2003, p. 1914). He called it his greatest blunder after hearing about Hubble’s work on cosmic expansion.

What is Dark Energy It is postulated that the Universe is composed of about 75% dark energy, 20 % dark matter, and 5% normal atomic matter (Caldwell & Kamionkowski, 2009). The idea of dark energy explained the enigma of the mutual gravitational attraction of matter and universal expansion. The idea also highlighted the reality that there is much we do not understand about the Universe. Dark energy is a force that repulses gravity, which cannot exist according to Newtonian theories on gravity, but does exist in general elativity theories (Caldwell & Kamionkowski, 2009). Caldwell and Kamionowski go on to explain that the gravitational field of a negative-pressure fluid, caused by thermal molecular motions, is repulsive.

The fluid is dark energy. Other theories on dark energy exist. One theory is that dark energy is nothing more than a cosmological constant or simply cosmic expansion. “As the Universe expands, space stretches much like the surface of an inflating balloon, and galaxies get farther and farther apart” (Banchi & Rovelli, 2010, p. 21). Einstein postulated a repulsive vacuum energy that would hold the Universe in balance with attractive gravity, but miss applied it to a conceptualized static universe (Rishwanm, 2008). The cosmological constant appears to fit the definition of dark energy. The Dark Energy, Dark Matter Relationship At the beginning of the creation of the Universe, following the big bang theory, galaxies and stars were relatively close in distance and dark matter’s influence slowed the expansion of the initial explosion down.

Nevertheless, as the Universe was expanding, the distances between galaxies became greater and the influence of dark matter became weaker and overshadowed by the effects of dark energy. This overshadowing by the repulsive force is believed by some astrophysicists to explain why the Universe’s expansion is accelerating (Rishwanm, 2008). The acceleration is thought to have taken place about five billion years ago (Rishwanm, 2008). Conclusion New discoveries from technological advancements have spawned the need to revise our understanding of the Universe.

The discovery of the evidence of dark matter, substantiated through gravitational lensing, has provided an explanation on the incongruity of the apparent missing mass needed for the sustainment stellar cohesion within galaxies and their consistent, previously inexplicable, fast rotational speeds. The discovery of increased speed of the Universe’s expansion drove the need to explain the repulsive forces at work within the Universe driving galaxies further apart, a force named dark energy.

These discoveries highlighted the seemingly inversely proportional relationship between dark matter, an attractive force, and dark energy, a repulsive force. When the Universe was young and the galaxies closer together, dark matter’s attractive force was the dominant force at work, but as the galaxies became more distant from each other, dark matter’s influence waned and the repelling force of dark energy became dominant; increasing the expansion rate of the Universe. 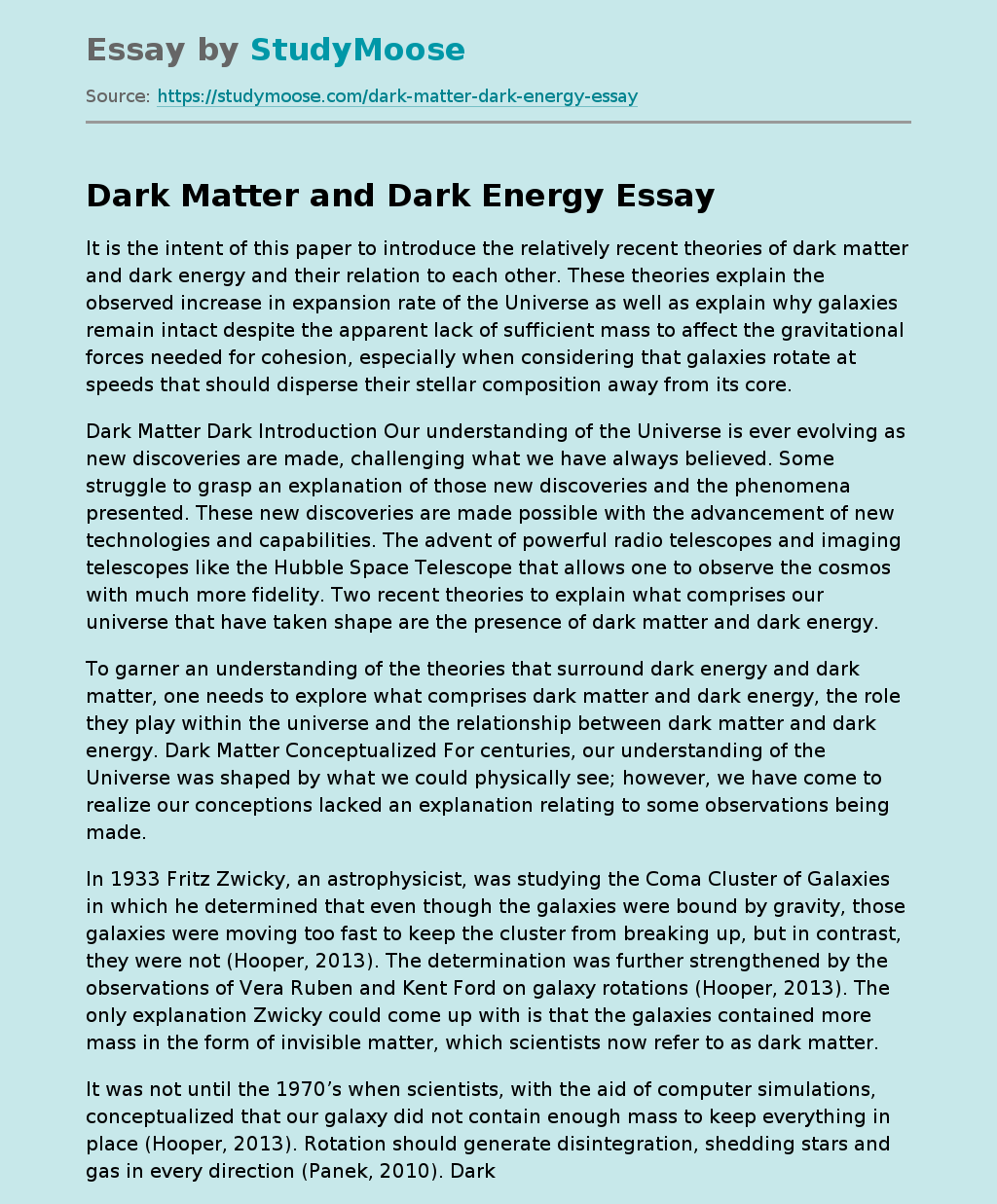