No matter where we are in the world, no matter what culture we come from, over time, we will change. It starts as adaptation and gradually becomes evolution. How do we know this? Looking at Charles Darwin’s finches, we see that their beaks have changed based on their diet and therefore is an adaptation that created a completely different subspecies of finch. That is evolution. Their adaptation turned into an evolutionary change.

If a hypothesis is proven or supported, then it becomes a theory.

Don't use plagiarized sources. Get your custom essay on
“ No matter where we are in the world no matter what culture ”
Get custom paper
NEW! smart matching with writer

A theory has stood the test of many scientific trials. A theory, even though it has been tested and supported, is still not a fact. They are still only explanations of scientific truths. Although the theory of evolution is rooted in biology, an understanding of humanity is necessary. Because of natural selection and variation, not all traits and characteristics are passed down from generation to generation. Some fewer desirable traits become lost and some more desirable traits are passed down.

The way the society responds positively or negatively to a phenotype as an ideal type e.

g. skinny vs fat, tall vs. short, light vs dark hair will influence the choices individuals will make in their own lives and in their mate selection. As these cultural values toward phenotypes change the individual and societal response will change as well. In the long, however, these things will have a minimal impact on the gene pool, unless there is some conscious social or cultural policy of genocide of those who display the undesirable phenotype. This is the theory behind eugenics.

The Lamarckian argument does have an appeal when it comes to cultural evolution. Sociocultural system is not genetically based, they are people based. People learn from experience and change their behaviors accordingly. Populations acquire new ideas and learn from the new experiences of their members. These ideas are passed on to both the living and future in response to their immediate needs. There are adopted or rejected independent of the biological dynamics taking place in the population’s gene pool. However, there selection may have a long-term impact of the gene pool.

Natural selection can be explained as one of the basic mechanisms of evolution wherein the “struggle for existence” will favor individuals with advantageous variations. These traits are inherited by offspring and passed down through generations. Firstly, a random mutation/variation arises. The environment and selective pressures surrounding the organism then determines whether this will be an advantageous or disadvantageous trait.

No matter where we are in the world no matter what culture. (2019, Nov 16). Retrieved from http://studymoose.com/no-matter-where-we-are-in-the-world-no-matter-what-culture-example-essay 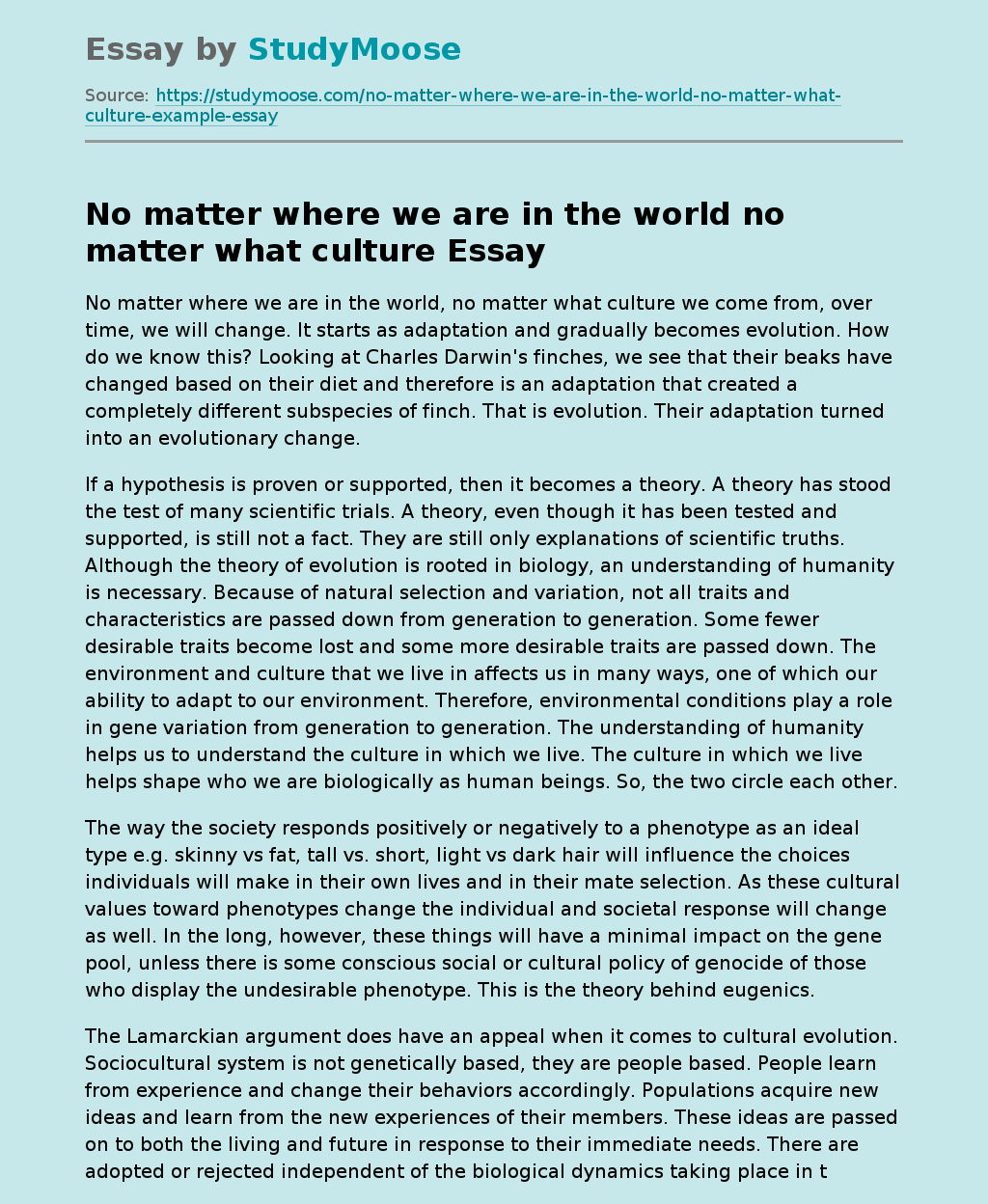